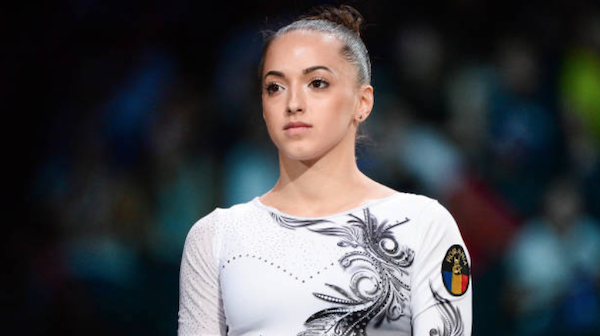 Will Larisa Iordache qualify to Tokyo?

As you may know – or not know, if you’ve completely given up on trying to understand the Tokyo 2020 qualification system, which is fair – qualifications at this week’s European Championships in Basel, Switzerland will also act as the qualifications for two of the continental championships berths for the Olympic Games. Some gymnasts from countries that have already fully qualified teams are hoping to earn an additional spot for their federations, while others haven’t yet been able to qualify individually and want to make that happen here.

In all, three-quarters of the roughly one hundred women expected to compete in qualifications are eligible to win an Olympics berth, but how many are actually capable?

Let’s start with those who have a chance to qualify as individuals, since these athletes undoubtedly have much more on the line. These are gymnasts who didn’t qualify individually at world championships in 2019, either because they missed the cutoff or couldn’t attend, and who are using Euros as a last-ditch effort to get their ticket to Tokyo.

Many of these athletes hoping to earn nominative berths (meaning the spot they earn will belong to them) won’t have a strong shot at qualifying given the depth here. Some of those from programs that got close to qualifying full teams to the Olympic Games could be strong contenders, but most are from smaller programs, and if they didn’t meet the cutoff as all-arounders at worlds, they definitely aren’t going to be among the top competitors in Basel. There are also a few who didn’t compete at worlds due to injuries or not being age-eligible at the time, and while they likely could have met the qualification standard in Stuttgart had they attended, with only two spots up for grabs here, it’s not likely that most will be able to pull it off.

Iordache is in an incredibly rare position as an athlete who didn’t attend worlds in 2019 but who does have the potential to be among the top all-arounders here. Though Euros in Mersin didn’t officially have an all-around competition last year, Iordache had the top all-around score in qualifications with a 54.565, which would have been good for fourth place in the all-around final at Euros in 2019. Comparisons aside, Iordache also looked really strong and steady on all four events, leading a young Romanian team to the silver medal while also winning three apparatus medals, including the titles on beam and floor.

I do think Iordache will be a leading contender for one of the two Tokyo spots, but I don’t think she’s a lock, and it’ll be an agonizing wait until we finally see her compete in the fourth subdivision, where she’ll start on beam. A 55+ would be ideal, and would give her a bit of a safety net, but the key for Iordache will really be about hitting every routine as confidently as she can, as if her life depends on it.

Among the other others fighting for nominative spots, I think her biggest competition will come from the three eligible Ukrainians, especially Anastasiia Bachynska, who missed out on an individual berth at worlds in 2019 due to the one-per-country rule after finishing just seven tenths behind Diana Varinska, and Anastasiia Motak, who is just 16 and wasn’t age-eligible for Stuttgart.

Motak has been the stronger of the two in recent international competitions, though Bachynska looked great at national championships earlier this month, and while she won’t get a 55.100 in the all-around or a 15.0 on beam like she did there, she certainly looked much stronger than she did at Euros last year, where she was coming off of an injury. There’s also Yelizaveta Hubareva, also 16, though she’s a bit weaker than the other two and I don’t anticipate her being as much of a threat, but you never know what will happen if she hits and no one else does.

Iordache is a more capable all-arounder than all of these, and there isn’t anyone else hoping to earn a nominative spot who can challenge her. Most of the other gymnasts in this category are typically “50-on-a-good-day” all-arounders, at least internationally, and that includes Iordache’s teammates, Antonia Duta and first-year senior Maria Ceplinschi. There are a few who likely could have qualified in 2019 had they been given the chance – Marta Pihan-Kulesza of Poland, Maisa Kuusikko or Ada Hautala of Finland, Camille Rasmussen of Denmark – or had they given stronger performances in Stuttgart – Jasmin Mader of Austria, Elina Vihrova of Latvia – but their scores here likely will not contend with the top gymnasts.

Most of the top gymnasts come from the group of women looking to earn additional berths for their countries, though, and that’s where Iordache’s biggest competition will be. In an effort to keep the already-qualified teams from being ridiculously dominant, the FIG rules make any gymnast who was part of the team qualifying effort ineligible to qualify a non-nominative individual berth here, meaning countries that sent their best to Doha in 2018 (where Russia qualified a team) or Stuttgart in 2019 will have to rely on second-string options here.

While this does limit some countries – Germany, France, and Belgium, most notably – from being able to put up qualification-standard performances, there are a few with athletes who couldn’t participate at world championships for whatever reason, but who aren’t even remotely “second string.”

Obviously, this means Russia, which has three gymnasts eligible to earn the berth for Russia here, because all three were too young to compete as seniors earlier in the quad. Vladislava Urazova and Elena Gerasimova both turned 16 in 2020, and as if that wasn’t good enough, with the Olympic Games getting pushed back a year to open the pool up to 2005-born gymnasts, Viktoria Listunova was also able to enter the picture, making the Russians a formidable adversary for Iordache or anyone else hoping to qualify.

The good news for the non-Russians is that the Olympic berths here are limited to just one per country, so even if two of the young Russians go one-two in prelims, only one will count in terms of the Tokyo situation (though both would be able to qualify into the all-around final, so no worries there).

Listunova is probably the favorite for qualifying a spot, both compared to everyone who has entered the competition and compared to the other Russians, which is probably why the federation opted to include her in the final subdivision with veteran Angelina Melnikova, while Urazova and Gerasimova will compete in the first round, putting them at a slight disadvantage given how scoring trends upward as the day goes on. While Gerasimova – who lacks a Yurchenko double on vault – is the weaker of the three and will probably not come out as Russia’s top bet, Urazova can be just as capable as Listunova is when it comes to topping the field or earning the spot for her team, but either way, Russia will almost certainly win one of the spots, so it doesn’t matter who does it.

The Italians could also present a huge challenge for Iordache, and anyone else hoping to sneak in. Not only do they have Martina Maggio, the 2019 worlds alternate who has looked excellent this year in the lead-up to Euros, but ten days ago, three-time Olympian Vanessa Ferrari returned to the all-around for the first time in nearly five years, and despite a fall on floor, she looked incredible. Though Ferrari was initially hoping to tumble her way to Tokyo by earning the apparatus world cup berth on floor, she’s now looking like a legitimate contender for the four-person team itself, and a hit performance from her here could absolutely put a +1 spot into Italy’s hands.

Finally, Great Britain has a couple of gymnasts in the mix, with Amelie Morgan, Jessica Gadirova, and Phoebe Jakubczyk all eligible to pick up the addition berth for their country. Morgan and Gadirova are the stronger all-arounders, with Morgan missing out on 2019 worlds due to an injury while Gadirova wasn’t age-eligible for Stuttgart, though it’s hard to say what they’ll be capable of here. Neither has competed since 2019, but Morgan is generally a tidy and consistent gymnast while Gadirova has tons of difficulty, so either could make things interesting. I wouldn’t consider either a favorite for a spot, but I could see a good day from them upsetting a weak day from the stronger opponents here.

I kind of cold-shouldered the other countries that qualified full teams and have eligible athletes here, basically because I don’t believe anyone they have competing in the all-around will be able to contend, though Carolann Heduit of France, Noémie Louon of Belgium, and Emma Malewski of Germany are all superb, Sheyen Petit of France is a wonderfully artistic performer, and Jutta Verkest of Belgium is a young talent with lots of potential for the future. While I think they’re a bit too far behind to match the superstars of this competition, and doubt any will wind up among the top competitors, they’re still absolutely worth keeping an eye on.

My heart is saying Russia and Iordache will pick up the two Olympic berths here, but there’s a part of me that remains nail-biting nervous about our Romanian queen, especially with the Italians putting Ferrari back in the mix. I’d personally love to see at least one spot go to a country that hasn’t qualified a full team just so we can spread the wealth a bit, but there’s a reason the stronger countries qualified full teams to begin with, and that reason is depth.

Russia and Italy were the second- and third-best teams at world championships in 2019, and the five gymnasts who competed for each program there just happened to be the best available at that time. It’s not surprising that both teams are capable of sending even stronger gymnasts to this competition 18 months later, and it won’t be surprising if these are the two countries that end up taking the additional spots.

But if Iordache doesn’t make it, I will die, not to be dramatic. Though I will be so proud of her no matter what.

The women’s qualifications begin tomorrow, April 21, at 10 am local time (4 am ET). Qualifications will stream on gymtv.online, which also has the full schedule and is where you’ll be able to find all results.

10 thoughts on “Iordache Fights for Last Chance at Tokyo”