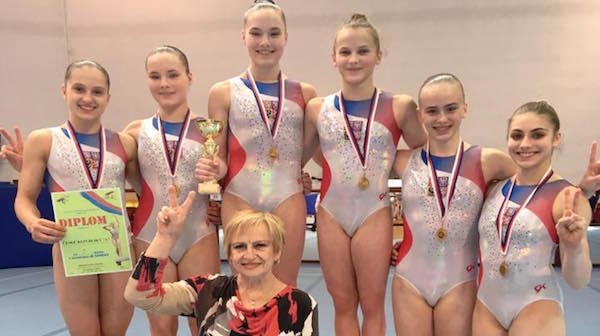 The rising star of the Czech Republic, Veronika Cenkova, was her team’s strongest competitor at worlds last year at just 16. Unfortunately, nerves got the best of her, leading to several mistakes on bars and two falls on beam, without which she would’ve made it to the Olympic test event for sure.

Without Rio in sight for her this year, Cenkova has focused on growing and maturing in the sport, hoping to lead her country with more experience in the coming quad. At the Czech Friendly over the weekend, she showed immense progress in her competitive ability, winning the all-around title with a 52.4 and leading her team to victory over visitors from Israel and Austria.

Cenkova is an especially beautiful gymnast on beam and floor, and she had the highest marks here on Saturday in addition to the third-best score on bars with her 13.0. While her vault is still a bit weak – she only competes a Yurchenko layout – she is looking good with European Championships on the horizon, where she’s expected to lead in the absence of Kristyna Palesova and with Anna-Maria Kanyai limited to just bars and beam due to injury.

Despite the win, the Czech team showed that there’s still some work to be done before they can start to join other European nations on the rise, but that actually may be right around the corner thanks to some of their juniors, the best of whom are right at Cenkova’s level. The junior A team not only took the top six spots in the junior all-around and the top three scores on every event, but also bested the senior team’s score by eight points, looking better on every event but bars.

The top four in this group – Holasova, Brabcova, and the Merkova twins – are products of Prague’s Bohemians club, one of the biggest multisport clubs in the country and the birthplace of the FC Bohemians football team. Bohemians seems to be great at exploring each athlete’s individual strengths, which is why Vendula Merkova only has a tsuk back pike on vault but then tricky and elegant combinations like an Onodi to full Y turn on beam while someone like Holasova is encouraged to show off her power on skills like her standing arabian there and a tucked full-in and a double arabian on floor. It’s how gymnastics should work, and yet it’s something many national programs tend not to focus on, forcing more “compulsory” style skill requirements while ignoring individual strengths and weaknesses. I like that the Czech federation gives its individual gyms the freedom to explore an athlete’s talents and think that could set them apart next quad.

This set of juniors is about on par with programs like Japan, France, and Great Britain, and should do very well in the team aspect of Euros (while there’s no junior team final, they still perform as a team in qualifications and are ranked in this way as well). With someone like Cenkova at the helm when these young kids become seniors, this should be a very exciting program to watch in the next few years.

In the senior division, Israel narrowly pulled out a win less than a point ahead of Austria. Tzuf Feldon contributed on all four events and posted a 49.1 all-around to finish fourth there, national champion Ofir Kremer helped out on bars and beam (her 12.75 on the latter was the third-best of the day, Gaya Giladi competed everywhere but bars to post the top score of 14.15 on vault and the second-best of 12.1 on floor, and newcomer Michal Tocker competed all events but beam. It was good preparation for this young team looking forward to competing with a whole squad at Euros next month.

Austria was without team leader Lisa Ecker, who competed at Bundesliga this weekend, as well as Elisa Hämmerle and Erja Metzler, both of whom are out with injuries at the moment. They were a bit weak overall, though Jasmin Mader did a great job stepping up as the leader, placing second all-around with a 51.6 and posting the second-best scores of the day everywhere but floor. Olivia Jochum also came in with some strong work, contributing scores everywhere but bars, but their young teammates – Katharina Puffer, Beatrice Stritzl, Tamara Stadelmann, and Linda Hamersak, all 15 or 16 – don’t really have the skills or experience yet. Puffer had the strongest finish among them with a 44.8 all-around, followed by Stritzl with a 44.15, Stadelmann with a 44.0, and Hamersak with a 41.85.

Full results from the Czech Friendly are available here.