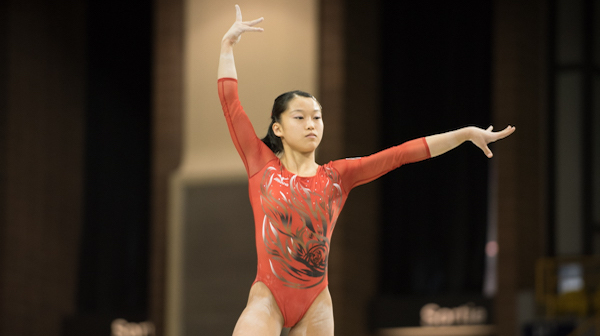 We’re excited to kick off our best scores series for 2018, and while it’s been a little slow so far, with only 17 meets since the start of the season, some big names have competed and we’re excited to see where everyone stands as we head into a busy March!

So far, we’ve seen 587 all-around performances, as well as 729 vault scores, 756 bars scores, 776 beam scores, and 747 floor scores, in addition to 144 two-vault attempts that get averaged for an event final (or qualification into a final).

Below, find a list of the top all-around and event scores thus far, as well as the top D scores for each event. An asterisk (*) next to the name denotes a junior competitor, and I’ve removed bonus from all domestic meets to keep things consistent. As a note, we don’t include juniors in the two-vault averages or D score combos because they’re competing under modified rules that allow two vaults from the same family, and if a competition uses bonuses but their score sheets don’t differentiate those bonuses from the totals, we don’t include those scores in our database (sorry Elite Canada juniors!).

For full lists of all scores this year, and to follow along between our monthly best score posts, check out our top scores spreadsheet. We update this religiously, after every single meet, so feel free to play around over there, sort the columns, whatever you feel like doing.

As a reminder, this is just a fun way to track the top range of scores in the all-around and on each event. Obviously every meet is scored at a different standard and it’s impossible to compare from meet to meet, but calm down — it’s nothing serious. We’re not predicting the next Olympic champion or electing the next leader of the free world. It’s just easier this way to see a range of scores that could be the goal gymnasts will be trying to reach at bigger international competitions.