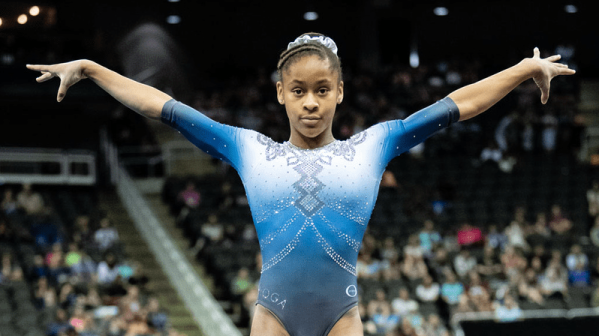 This weekend will see two big elite meets with lots of top talent, including the WOGA Classic and Liukin Invitational in Texas, as well as the kick-off meet for Italy’s Serie A league season, which features some super impressive international guests.

One of my favorite meets to follow, yet also the most impossible meet to follow for some reason, the international elite session at the WOGA Classic will feature lots of strong talents from both the United States and across the world, with gymnasts expected to compete from Japan, Russia, Ukraine, Canada, Great Britain, Belgium, and the Cayman Islands.

I just received the official roster from Chalk Warrior, and the most exciting name on the list is WOGA gymnast and 2019 junior worlds team medalist Skye Blakely, who is competing alongside sister Sloane Blakely and junior teammate Ashlee Sullivan. This meet is also generally pretty popular for Texas-based gymnasts, with national team member Sophia Butler expected to make her senior debut this weekend, while Karis German, who just stunned at last weekend’s Metroplex elite qualifier, will compete alongside several of her WCC teammates, including Amari Drayton, Olivia Hollingsworth, and Zoe Miller, and Katelyn Rosen of Mavericks is also on the roster.

The Liukin Invitational is basically the dude version of the WOGA Classic, with the international session featuring gymnasts from the same countries we’ll see in the women’s field, with the addition of Colombia.

It’s actually a pretty big men’s field this year, and other international gymnasts to call out from the list include Felix Dolci of Canada, Yevgen Yudenkov and Maksym Vasylenko of Ukraine, Michael Reid of Jamaica, and Javier Sandoval and Carlos Calvo of Colombia. From the U.S., Alex Diab will represent Illinois, junior Asher Hong will lead his team from Cypress Academy, and WOGA’s team will include Dallas Hale, Cameron Lee, and Noah Newfeld.

Both international sessions will be held on Saturday, February 1, at 7 pm local time in Frisco, Texas. There doesn’t seem like there will be any streaming, but hopefully we’ll see some live updates from Chalk Warrior on Twitter, and there’s a live scoring event page on Meet Scores Online, but sometimes they only share the J.O. results and not the elite session, so keep your fingers crossed but your expectations low.

The first of four Serie A competitions this year begins this weekend in Florence, where Italy’s top clubs will come together in Florence to compete with the goal of winning the entire series to take the “Scudetto” trophy.

There are several Serie A divisions for both the men and women, and we usually focus our coverage on the Serie A1 league, which features the top 12 clubs in the country. The women’s A1 competition is usually dominated by Brixia Brescia, currently home to the “Brixia Four” – Giorgia Villa, Asia D’Amato, Alice D’Amato, and Elisa Iorio, who led Italy to its first team medal in almost 70 years at world championships in Stuttgart last year. The club is aiming for its seventh consecutive title this year, while on the men’s side, Salerno is going for its third title in a row.

We also share results and highlights from the Serie A2 division, which features the next-best 12 clubs with some led by national-level competitors, and then there’s also a Serie B division, which I don’t tend to cover as it’s at a much lower level than the other two, but I’ll link out to results and make a note of anything exciting that happens to go down.

This year, the first three Serie A meets – Florence this weekend, Ancona at the end of February, and Naples in March – will count as the “regular season,” and then the series final will take place in Milan this June, which will include both semifinals and finals.

It’s an interesting new take on the competition, following the Bundesliga and Top 12 formats a bit more closely, and making things more exciting in those final matches. Previously, rankings throughout the entire season determined the winners at the end, but having that final meet determining the winners adds that pressure of needing to hit when it counts, which will be good practice for the gymnasts hoping to compete at the sport’s highest levels.

In addition to the Italian gymnasts leading for their clubs, some exciting international guests will also be on the roster this year, with Russians Angelina Melnikova competing for Gal Lissone, Tatiana Nabieva for Salerno, and Daria Belousova for Audace, while Maia Llacer of Spain will compete for Ginnica Giglio.

International guests for the men include Spanish stars Nestor Abad for Pro Carate, Nicolau Mir for Ares, and Joel Plata for Spes Mestre, and then Russia’s Alexey Rostov will represent Panaro Modena, and Ukraine’s Vladyslav Hryko will represent Virtus Pasqualetti.

The Serie B competition begins on Friday, January 31, at 4 pm local time, while A2 will be held Saturday, February 1, at 9:30 am and A1 will take place later that day, at 2:30 pm. Sometimes this streams on Italy’s streaming service, which I have yet to figure out after literal years of trying and they’re not even linking to it this year, though you can follow scores on LiveGym.

2 thoughts on “The Weekend Ahead: WOGA Classic, Liukin Invitational, Serie A”