Four years ago, a fairy-like Russian by the name of Viktoria Komova stepped onto the floor at the 2010 Youth Olympic Games. Young Komova ran away with the all-around title by almost full three points, earning a 61.25 – the best all-around score in major competition that year (second best was teammate Aliya Mustafina in the all-around final at World Championships).

In addition to the all-around title, Komova also pulled in vault and bars golds before finally showing that she was indeed human, falling in event finals on beam. Though floor wasn’t her best outing, it was still more than enough of an effort for a bronze.

This was the competition that introduced the world to Komova’s talent and beauty; though she’d done well for herself at Junior European Championships earlier in the year, her time in Singapore was outstanding, putting her on the map as one to watch for 2012.

This year, Russia will introduce us to Seda Tutkhalyan, a 15-year-old of Armenian heritage born in Moscow. She looks positively miniature, her features are dark and mysterious, and like Komova, she always looks slightly serious in her demeanor, especially in facing her competitors.

Tutkhalyan put herself on the map early in 2013 with a fantastic finish at the Russian Junior Championships, where she earned team, all-around, vault, and bars gold along with a floor bronze. Later that year, at 14, she made her international debut at Gymnasiade in Brazil, winning first with her team and placing 5th in the all-around (just about a point behind her gold-winning teammate Alla Sosnitskaya), but starting to show signs of inconsistency in bars and beam finals, where falls kept her out of the medal race. She finished the meet with a bronze on floor. 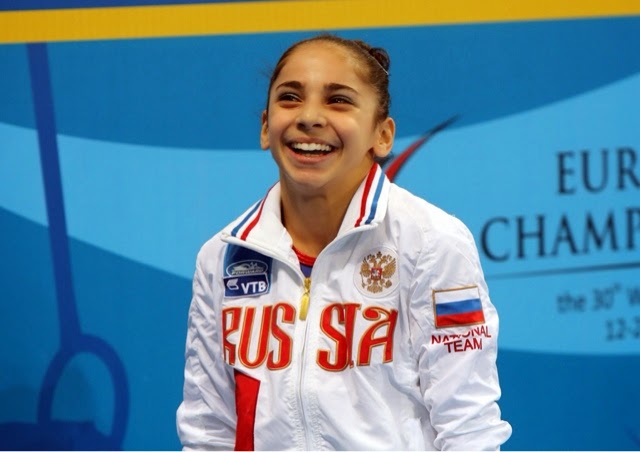 In 2014, her Russian Championships performances led to a silver in the all-around and on bars as well as gold on vault, and she was named to the five-member team for the Junior European Championships in Sofia, Bulgaria. She helped her team to the gold with mostly solid performances, counting four scores into the total. Unfortunately, she then fell apart in the individual finals, placing seventh all-around after multiple falls (her all-around score fell from 56.332 in team finals to 53.932 in the AA); she also finished fourth on vault, seventh on beam, and eighth on floor.

Though it wasn’t the finish she wanted, her results in the Student Spartakiada in Penza last month – team/all-around/vault gold and bars bronze – seem to have inspired confidence to put her back on track. She earned a 56.232 overall, a score that could be raised about a point and a half if she can clean up each of her events.

Here she is on vault, competing a DTY and a Yurchenko half-on layout-off. You can see the form issues clearly throughout both, so perhaps they’re a bit too difficult for such a tiny gymnast lacking in power?

Here’s a relatively clean bar routine for her, showing a lot of promise, if not the most difficult routine we’ll see.

If she hits beam in Nanjing, she has huge potential for a medal due to her absolutely packed routine, though the problem is that she very rarely competes it without falling or making large mistakes. That roundoff layout full is so impressive, but then she lets a side aerial get the better of her.

Her floor routine, on the other hand, isn’t very difficult but is performed very well…though for such a fun and energetic routine, I wish she wasn’t so stoic! It’s not her best routine but I wouldn’t be surprised if she could still make a final if she has a good outing in qualifications.

Tutkhalyan is one of the strongest young gymnasts coming into the Youth Olympic Games, but her lack of consistency could hurt her in a field with several gymnasts who have the ability to defeat her – as fellow competitors Laura Jurca of Romania and Ellie Downie of Great Britain have done already, and as China’s Wang Yan and Brazil’s Flavia Saraiva have huge potential to do.

While Komova came into the competition practically unable to be defeated, Tutkhalyan won’t exactly be in the same position, largely due to her somewhat inconsistent outings and the threat she’ll face from a highly competitive field. However, if she isn’t able to challenge for the all-around title, you can expect her to have a strong shot for the podium even with a mistake or two, as well as spots in pretty much any event final, if she can hit.