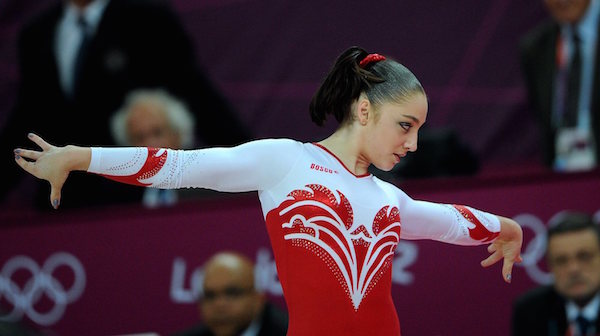 It’s time for the 23rd edition of You Asked, The Gymternet Answered! We apologize if we haven’t gotten to your question yet, but we are trying to answer them in order. Something you want to know? Ask us anonymously by going through the contact form at the bottom of the page!

Why are the tucked arabian and tucked full given the same D value on beam?

They are two different skills from two different families. An arabian is considered a forward element because it’s a half turn into a forward flip. The twist precedes the flip. In any backward twisting salto, the gymnast flips and twists simultaneously. They are given equal value because though the arabian has only a half turn as a opposed to a full turn, it has a blind landing where a full does not.

What do you think of Wang Yan from China? I think she is a big help for the team next year!

We are big fans of Wang Yan here at The Gymternet! She has built herself up a nice reputation as a vaulter and will no doubt be a huge asset for China on that event both in a team final situation as well as in terms of making a vault final. While her floor isn’t quite as strong, she has tremendous potential there, and it’s also a huge weak spot for China so I wouldn’t be surprised to see her making that a focus. I think it would be practically impossible for them to leave her off of a team with her strengths on these two events, and then as a bonus, she also has a gorgeous beam. I’d love to see her upgrade there, but even if she doesn’t, vault and floor alone are definitely enough to make her an easy choice for any major international team over the rest of this quad.

What is the status of Laurie Hernandez? Will she be back soon and do you expect to see her contending for Rio?

Laurie is currently training again and returned to the national team training camp in November for the first time since her knee injury last spring. I think we can definitely expect to see her in time for the U.S. meets next season, though I’d love to see her return a bit sooner to hopefully get a spot on the Jesolo team. I think she’s definitely in the mix for those who have a shot at Rio, but one of her best events – floor – is looking as though it’s going to become pretty competitive, so she’ll definitely need some upgrades there, as well as across the board if an all-around spot is what she’s shooting for. She upgraded a ton between 2012 and 2013 so I’d say it’s not out of reach for her, though everyone will be throwing in big upgrades over the next year so contending for Rio will be a matter of whether she can surpass everyone else and still stay consistent.

What’s the status of the Maroney Comeback 2.0? Is she injured again? One would assume this far removed from her surgery she would be ready and eager to return to camp. Especially now that her Olympic teammates are back and poised to overshadow her.

According to recent tweets, she’s been dealing with health issues in addition to the injuries she had to fight since returning from the 2013 World Championships. She has reportedly taken time out of the gym in an effort to get better, but still has her heart set on competing in Rio a hundred percent. I think she still has a major chance at making a comeback, especially if she sticks to getting her vaults back to her 2013 level while upgrading on floor. Vault and floor would definitely be her ticket, so I don’t see the sense in trying to make an all-around comeback, though if she’s happier doing all four events, all the power to her. But I just don’t think her bars and beam are something Martha Karolyi sees as assets in a team final, especially in this current field of gymnasts. I’m sure with Rio on her mind she’s incredibly eager to return to camp, but her health is more important and if she’s not physically or mentally ready to return, it makes no sense to push it. I think it’s smart for her to wait until she’s at her best, so if that’s what she’s doing, she shouldn’t have a problem returning. She’s already had one successful comeback after a major injury, and I think she knows herself and her body well enough to make it through a second comeback smartly.

At World Championships, Aliya had only three tumbling passes in her floor routine. Is it not a requirement to have four? Or do gymnasts usually just have four to build difficulty?

There is no tumbling pass number requirement. Gymnasts who do have four likely do it to maximize their start values. Those who have three often showcase higher difficulty in their dance elements, as Aliya did this year. Fewer tumbling passes typically occur when a gymnast doesn’t have the endurance to make it through four difficult passes safely, and you’ll also see many juniors with just three passes as they work to build difficulty in their routines over the years.

What future do you think Madison Kocian has in elite? Do you think she will be sent on any more international assignments?

I think she will definitely be a top choice for Jesolo in the spring if she’s healthy, and then when it comes to making a Worlds team, it’ll just depend on how she stands on bars alongside everyone else. I think Martha would really like to have a solid bars/beam specialist, and right now she just doesn’t…Kyla Ross was injured and had to downgrade this year, Alyssa Baumann’s good on beam but struggles to hit a bar set, and Kocian and Ashton Locklear are lovely on bars but just aren’t at the same level on beam. I think these four will continue to contend in 2015, but I think it was pure luck that all four ended up on the Worlds team in a single year. That definitely won’t happen again, as Martha will want to add another strong floor worker to the mix, and probably one who can also knock out a reliable beam set as well (think Aly Raisman in 2012. If everyone’s healthy, there won’t be much room for girls doing just one event in a team final, as Alyssa, Madison, and Ashton all did this year, so if Madison wants to be in the picture for 2015, she needs to make sure she can contribute on more than just bars. Her beam is nice, but definitely needs some work, and I think in addition to Kyla and Ashton, she’ll also be adding Nia Dennis (if she’s worked on her consistency this year) into the mix of those who fit that bars/beam mold. So yes, she can contend, but she has to make sure she has the most to offer over others who can also contend.

Taylor unfortunately fell on her beam dismount on the second day of competition. I was across the arena, but it looked like she came up short on the landing and hit her neck/head. She was helped off the podium by medical staff and unable to continue competing.

What happened to Giulia Steingruber at the World Championships?

She had downgraded a bit, from what I remember, and then add some falls into the mix…overall, she just did not have her best competition, though there were no serious issues. I think she knew going in that she wouldn’t be at her best, which is why she didn’t bother going for her most difficult skills, from what I could see. At the Swiss Cup in the weeks following Worlds, she severely injured a ligament in her ankle after missing a block on vault and had to withdraw from a couple of galas as well as the World Cup meets. But it shouldn’t be anything to worry about! She’s already back to training and hopefully things will fall into place for her in Glasgow next year.

Do you know why Ariana Agrapides was not at camp? Is she injured?

Ariana isn’t one of the top juniors, so she probably just wasn’t invited. There typically aren’t many spots open beyond those on the national team…I think we usually see around 30 girls at camp, and when the Worlds team didn’t attend, they added a few more juniors to the mix, but typically the split is around 15 for each level and Ariana finished 21st at nationals this summer so it’s likely that she just didn’t make the cut. It doesn’t help that she’s not eligible for 2016 – like, Sydney Johnson-Scharpf and Maggie Musselman placed lower than she did at nationals but are eligible for 2016 so it makes more sense to invite them than it does to invite a junior who placed in the bottom half and won’t be eligible for another six years. Ariana also injured her toe this summer, which is why she wasn’t at her best at nationals, so it’s possible she’s also focusing on healing rather than pushing things.

What would happen if somebody tied in an event final? Not sure if that’s even possible, but if it did, how would they break the tie?

In the past, at FIG events the tie-breaker for an event final has been based on execution scores…whoever has the higher score gets the higher placement. This year, the FIG decided to do away with event final tie-breakers and said they’d let two athletes receive the same medal if they earned the same score, but they kept the same execution tie-breaker rule for event qualifications, which is why a couple of gymnasts (Emma Nedov on beam and Roxana Popa on floor, if I remember correctly) didn’t qualify into finals. At non-FIG meets, tie-breakers are up to the meet directors. USA Gymnastics allows gymnasts to tie on events and in the all-around, and they also allowed ties at Jesolo and other competitions like that.

One thought on “You Asked, The Gymternet Answered”