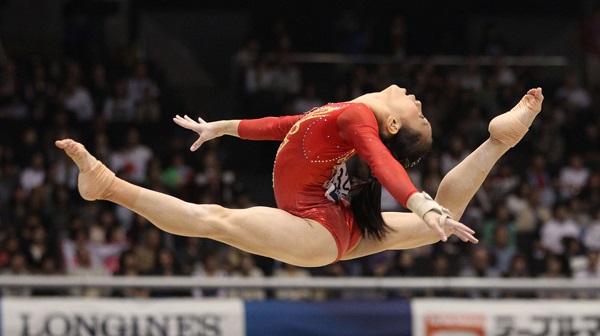 Yao Jinnan couldn’t compete at this year’s Chinese Championships due to a shoulder surgery she underwent in Texas this past February. With the event hosted in her home province of Fujian, Yao attended the meet and spoke to the Chinese press about her injury (which will keep her out of this year’s World Championships), her recovery, and what’s in store for the future.

Thanks to 16-233 on Tumblr, we were able to get a great translation of one of these interviews, available to watch on Youku.

This is the first time Fujian hosted such a big sport event like this, so even though Yao Jinnan was injured, she still came back to root for her home team. Can you comment on the performance of the Fujian team this year?

I’ll start with the women’s team I guess. I think for them, they did their best. Everyone who just started competing would have issues, and the more you compete, the more used to it you are because of experience. When they make a mistake, they might feel down or they might cry, so I’d go comfort them and tell them that it’s not a big deal.

Because the number one girl [meaning Yao] is not there, of course they are not as confident.

Maybe [laughs]. But I think they were overthinking as well, because sometimes, you just really want to win, but if you think too much, you are too excited, and some skills are going to be difficult to perform.

So Jinnan, how long have you been injured?

Yes, the last time I competed was at Worlds. I didn’t participate in the winter training as well.

Your injury is your shoulder?

For your injury, you needed to go to America for surgery. Did you go alone?

No. There was a meet for the team in the US so I just went along with them.

So they were competing and you went off alone to see the doctor?

Did you run into any issues in America? Or are you so used to it because you are an athlete and it’s not too out of the ordinary to get a surgery for an injury?

Well, for me it’s just a surgery, but some people, when they are in similar situations, they are scared. I know people who got shoulder surgeries as well and they tell me they were scared, so then I was a little too.

So once it’s done, you’d have to go through the rehabilitation process?

About six weeks, so I was there for almost two months.

Everyone wants to know how you are recovering, but first, let’s watch a video. [Video plays.] So that was you dancing. When you saw it earlier, you were saying “you guys are horrible!” but you were the one who posted it! A lot of your fans watched it and I watched on weibo too. There’s a bit of shoulder movements in the choreography, does it help with the rehabilitation process at all?

Ever since my surgery…it felt like I was quarantined from gymnastics, because I wasn’t training at all. I thought if I want to get back my difficulty, it would be quite hard. And I thought to make the process not so tiring, I’m going to get ahead of things and try to exercise and keep myself moving.

Let’s talk about your rise to fame. You entered the sports academy in 2000? You were five?

Well, when you are young, it’s just like playing. And it went well so I just kept going.

So it’s quite a natural process. You never thought you’d do so well?

I really want to know, all of this equipment looks so dangerous. You must have fallen a lot? Were you not afraid? Or were you so young that you didn’t really know fear?

Of course I was scared, but when you are training, you are concentrating and you have to be brave.

And in 2004, you were selected by the provincial team?

You said that you got into the national team quite late? 2010? So you spent 6 years on the provincial team? What were your goals? In 2008, you watched the gymnastics team and did that affect you?

There’s a large gap when it comes to skill wasn’t there?

Yes. And I thought my dream was super far away, because I was still on the provincial team. Back then I was super scared as well because I moved and the environment changed. And there were only four of us from Fujian, the other three girls were coached by the same person and on a different team. And I was coached by a national team coach… and then… I cried. [laughs]

Did you think when you entered the national team that you’d become world champion?

No. Even back in 2011, when I had the potential and the skills, I wasn’t aware of it. I thought I was not as good as everyone else. But in reality, that time was the best, because there was no worries or anything, I just had to do my best for myself, and that was enough as far as what was expected of me. But I wasn’t aware until I was in the finals and the coaches are telling me (I might be a world champion).

So now, thinking back, what do you think you lacked back then that prevented you from getting the title of world champion?

um… I was too green. You can definitely tell the difference between how a seasoned athlete and a novice athlete competes, that one is more mature.

Speaking of all your competitions, we have to mention the National Games. Us Fujianese people were so happy because you won AA, and it is the first time ever that the Fujian team won women’s AA. Back then, you and Shang Chunsong were both contending for this medal, in the end, the two of you were up there together. How did you feel before the scores came up?

What’s the relationship like between you and Shang? Are you guys close?

We are not on the same coaching team.

Oh so in the national team, you guys are not in the same group?

So it’s more of a rivalry between you two?

Whenever there’s a team competition, it’s me and her standing there, we were always rivals.

Let’s talk about the Asian Games. Do you think that was when you were at your best? You got four gold medals!

Not really. I was injured starting from 2012, and every time it just happens to be a month or a little over a month before a competition that I would get injured. And each injury is different, and each time I had to get used to the injury and figure out how to compete with it, each time the routines are not the best I could do. Because of the injuries I have to change my routines and what I can do, sometimes completely.

Is it a bit easier? If you were injured, you can say “I’m injured” and not expect to bring home so-and-so number of medals, so there wasn’t as much pressure?

When you are injured, you are extra nervous, and if you go up in team finals, everyone needs you, you can’t (think that), you have to press on and persevere.

Four gold medals, it must be heavy! What do you think about those achievements?

Actually, the Asian Games was to prepare us for Worlds, and after we won the team gold, there wasn’t as much pressure. So it got a bit better, but after all the competitions, maybe it was a little tiring, and when we got to Worlds, I wasn’t at my best.

But you still became world champion despite all that. Do you feel like you’ve waited for it for too long? Were you nervous when you waited for the scores?

I just wanted to do all my skills, and go through everything smoothly. Because right before the competition, I didn’t complete the routine once in training.

So during the competition you just wanted to perform all the skills and didn’t think about what kind of score you’d get? Were you relieved?

I was thinking the title of world champion, to say it’s hard, it’s not hard, but to say it’s easy…it’s not easy either.

So we have a bit of gossip we wanted to ask you, Jinnan, don’t be nervous! A little while ago you changed your name?

And the rumor was the reason why you changed it was because Yao-Jin-Nan sounds like “hard to get gold”, and that’s why you wanted to change your name?

[Laughs] Eh…I was really confused. I think it started as an internet rumor, that my name sounds like “it’s hard to get gold,” and then people were saying I should change my name, and my parents were working on it, but eventually it became nothing because I was more concentrated on competing and I didn’t know what they were doing, and eventually it wasn’t a big deal.

Are you still going to go by Yao Jinnan?

Let’s talk about Rio. It’s really hard for our female gymnasts to make it to two Olympics. What are you goals?

To be honest, whatever I think about, it is useless right now–I need to recover my shoulder first. Only if my shoulder recovers can I start training again and even begin to think about Rio.