The seventh rotation featured competitors from Belgium, the Czech Republic, Iceland, and France.

Belgium began on vault with three FTYs. Lisa Verschueren didn’t get much distance at all on hers, though it was nice in the air and nearly stuck, receiving a 13.7. Cindy Vandenhole was a bit better on hers with the distance for a 13.833, while Gaelle Mys posted a 13.866 for her big FTY bounced back a bit.

Vandenhole got things started on bars with a 13.366, though Mys had a struggle early on, unfortunately. She hit her toe full with some leg separation, but then on her front giant full, missed her hand on the pirouette and peeled off, landing hard on her back. It looked very painful, though she looked fine after and was even smiling after finishing her routine with some nice work, including her big Jaeger, a messy bail to toe shoot, and a near stuck double front, earning a 12.1. Thankfully, Verschueren hit a nice routine for a 13.4, so they didn’t have to count a fall.

Mys after her unfortunate fall.

Thelma Hermannsdottir was first up on bars for Iceland, earning a 10.033 after a clear hip to bail (leg separation), toe shoot, a toe full with crossed ankles, and a double tuck stumbled back. Her teammate Norma Robertsdottir had an issue with her very first handstand, and while she didn’t fall, she did have to rest for a moment on the high bar before continuing with a front giant, a piked Jaeger with bent legs, and a clear hip to bail with leg separation for a 9.566, which they were able to throw away thanks to Dominiqua Belanyi’s 11.7.

Robertsdottir after her bar routine.

On vault, Hermannsdottir hit her handspring front tuck with a small hop for a 13.233 while Robertsdottir added a 14.166 to their overall total; Belanyi’s 13.1 was discarded.

The Czech women saw some clean work from Veronika Cenkova on vault, earning a 12.6, followed by a Yurchenko layout with a small hop from Anna-Maria Kanyai, who posted a 13.266. Petra Fialova attempted a handspring front tuck, though stumbled forward on the landing and had to put her hands down for an 11.633. 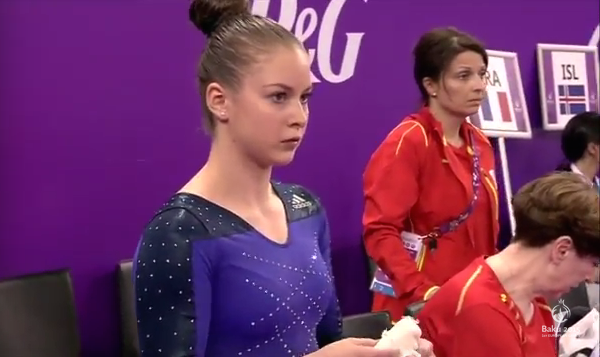 Cenkova in this lovely leo after her vault.

I thought the French ladies were all excellent on bars, even though Marine Brevet had a few issues in her routine. Brevet hit her toe full to Chow to bail to Ray nicely, but she caught her toe-on to Jaeger close and bent her legs, and then stumbled out of her arabian double front to earn a 13.033.

Brevet waiting for her bars score while cheering on her teammate.

Anne Kuhm had a more successful routine, though lower difficulty and some small form errors limited her to a 12.8 after her giant full to Gienger, Jaeger, toe on to bail to toe shoot, a very short handstand before the dismount (at least a three tenth deduction right there), and then a clean double layout with a step.

Valentine Pikul was the top French bar worker, with a shaposh to pak (leg separation), a Maloney to bail (leg separation) to toe shoot, a toe on to giant full, a Jaeger, and a very nice double layout, earning a 13.433.

On vault, Pikul started with a tsuk full looking nice in the air and hopping back slightly on the landing for a 14.1. Brevet also had a nice score here, with a 14.133, while Kuhm’s 13.9 was discarded.

Pikul after her very strong first day in Baku.

The final rotation of the day featured Norway, Ireland, Austria, and Latvia. Unfortunately, the broadcast didn’t show much of the women in this subdivision.

We did see Alina Circene of Latvia competing on bars, where she performed a very quick and easy routine including a clear hip to toe on to toe shoot, though she did come up into a dead hang at that moment. She then got ready to dismount, but sat her double pike, earning just an 8.433, which was counted to the final score as teammate Diana Jerofejeva had an 8.2.

Circene before competing on bars.

In addition to their bars scores, Valerija Grisane posted a 13.5 on vault for her big handspring front pike with a big step forward (she also had a nice tsuk layout with a bounce back as a second vault), where Jerofejeva counted a 13.1 and Circene’s 12.833 for her tsuk pike was tossed.

Tara Donnelly of Ireland was also shown on vault, where she had a very clean handspring front tuck, though she had a bit too much momentum going forward on the landing and took a big hop forward for a 13.2, which was tossed in favor of Nicole Mawhinney’s 13.3 and Ellis O’Reilly’s 13.733.

Donnelly before her vault.

On bars, Mawhinney posted a 10.5, O’Reilly earned a 10.366 after a fall (though she did have a nice bail to Ray as well as a toe front tuck half dismount), and Donnelly’s 8.9 was discarded.

I absolutely loved Solveig Berg of Norway’s bar routine. There’s not much to it, but she’s so calm and slow and steady in her work, and managed an 8.0 execution, one of the better e-scores of the day. Her skills included a clear hip (with a beautiful handstand coming out of it) toe toe on to Ray, a giant full right on top of the bar, and a very clean double tuck with a small hop for a 10.4.

Berg finishes her routine with a flourish.

Her teammate Sofie Braaten had a bit more difficulty, but unfortunately fell on her Jaeger, earning just a 9.5, while Martine Skregelid earned a 10.533 for her effort.

Leading the all-around were the three Russians, including Aliya Mustafina with a 30.333, Viktoria Komova with a 29.432, and Seda Tutkhalyan with a 29.132. Sophie Scheder and Elisabeth Seitz of Germany were tied in 4th with a 29.033, Giulia Steingruber of Switzerland and Noemi Makra of Hungary were tied in 6th with a 28.532, and Celine van Gerner of the Netherlands was 8th with a 27.700.

The competition continues on Monday with beam and floor, and team final medals will be awarded at the conclusion of the meet.