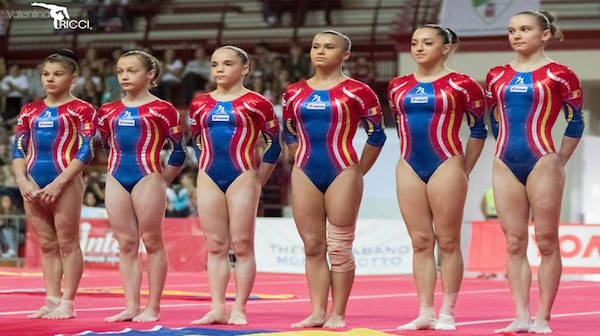 After the great results earned at the friendly meet held against France, the Romanians looked solid again in Italy, winning the second annual Novara Cup with a score of 226.5. Italy won the silver medal with a score of 225.45, while Belgium earned the bronze with a 218.55 and Spain finished fourth with a 211.2.

Larisa Iordache led the Romanian team toward victory with a great all-around performance, earning a 59.75. After being out for almost eight months due to injury, the 2014 world all-around silver medalist looked to be in good shape, ready to fight for the podium again in Glasgow. Her DTY looks clean as usual (earning a 15.0 with just a hop on the landing), while her bars set is still easily the best among the Romanian girls (she performed a stalder full to Maloney to clear hip half, Jaeger, Church to pak, van Leeuwen, and a toe-full right into her stuck full-in dismount for a 14.85).

This routine was a true blessing for the Romanian bars rotation, where the team counted two falls in their total score. Iordache went on to deliver a beautiful routine on beam (6.5 d-score, 15.3 total), and though the live stream unfortunately didn’t show her complete set, she hit a smooth roundoff layout, double turn, switch to switch half, front aerial to split jump to wolf jump, side somi, and a slightly under-rotated triple full dismount. On floor, she didn’t perform her full difficulty, opting for an opening full-in (replacing that double double) that she stuck, a piked full-in with a hop, a Memmel to illusion turn, a stuck triple full, and a stuck double pike (though she bent her knees on the landing) for a 14.6.

After all of the injuries she’s suffered in the past three years, Diana Bulimar is finally getting back into her best shape. Considering that her knee is still heavily taped, she played it safe on vault with an FTY for a 14.1. On bars, she had a fall on an over-arched bail, but did manage to hit her shaposh, Hindorff, clear hip full to Tkatchev, a Ray, and a full-in, posting a 12.9. On beam she was mostly clean, wobbling just on the switch leap, but otherwise hitting a bhs layout, front aerial, side somi, switch half, side aerial, split jump to sissone, full turn, straddle 1/4, and a double pike for a 14.25. She went on to hit all of her difficult tumbling on floor, including a double layout (with a small hop), a stuck piked full-in, a double pike, and a stuck double tuck, earning a 14.35.

Ana Maria Ocolisan delivered a solid DTY for a 14.7, but she also fell on bars, earning just a 12.85. She had some wobbles on beam, especially on her layout and on her front aerial, though she had a nice Y turn, side somi, side aerial, sissone to split jump, switch leap that she intended to connect to the switch half though she paused between the two, and a double pike with a deep landing to finish, reaching a 13.45. Finally, she finished her day with a 13.6 on floor.

The new senior Laura Jurca hit a good DTY, earning a 14.8, but she struggled on bars, scoring a 12.2. On beam, she didn’t have any major mistakes, hitting a sissone to full turn, a bhs layout, switch to switch half (leg up), front aerial, side aerial, straddle 1/4, and a double pike, which she landed with her chest very low, forcing her to take a step forward, earning a 13.85. Though the beginning of her floor wasn’t shown, we did get to see her hit a 2.5 to front tuck (though she stumbled forward on the latter), a triple full, and a double tuck landed with a step back, earning a 13.8.

Andreea Iridon performed as a specialist on two events. On bars, she hit her set, delivering a toe-full (with a hesitation) to Gienger, a stalder full, Ricna, bail to Ray, and a full-in with a step forward, earning a 13.85. Unfortunately, she fell on her double pike beam dismount after a wobbly routine that included a 1.5 Y turn, switch half (leg up), side somi (wobble), a side aerial that missed the connection to the split jump and sissone, a bhs layout, switch leap to Y turn (wobble), and a front aerial, earning a 12.9.

The final member of team Romania, Silvia Zarzu, had ups and downs throughout the meet, having falls on both bars and beam (for scores of 12.15 and 12.85, respectively), though she did obtain a 14.35 for her DTY and a 13.3 on floor.

Even though the Romanian head coach told the Italian commentators that Catalina Ponor would be part of the worlds team, today Ponor officially stated that she won’t be able to compete in Glasgow due to injury. Without her contribution, the team will miss potentially big scores especially on vault and beam, though Romania still isn’t in the same position they were in last year, when Iordache basically carried the entire team on her shoulders. This year, they will bring a bunch of consistent DTYs, and they still have overall strong rotations on beam and floor, with bars – as always – their weakest point. But if they can improve their consistency on that event in the coming weeks – at least to the point where they can avoid falls – they shouldn’t have a problem qualifying to the team final, and thus to the Olympic Games.

One thought on “The Romanians in Novara”