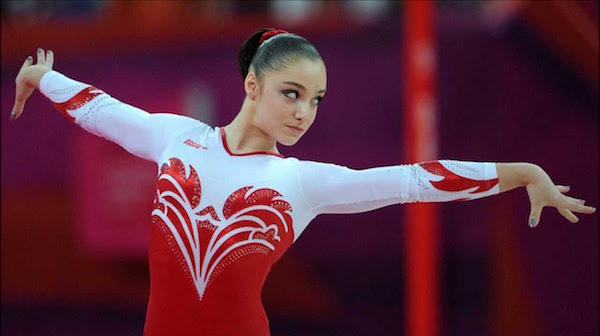 No one on the list was much of a surprise. It included four of this year’s worlds team members, including vault champion Maria Paseka, bars champion Daria Spiridonova, floor medalist Ksenia Afanasyeva, and Viktoria Komova, as well as Aliya Mustafina – who missed worlds after spending time away from the gym due to a minor injury – and Angelina Melnikova, this year’s unofficial Russian Cup champion who will be a first-year senior in 2016.

As a follow-up to this preliminary squad, Rodionenko spoke to the press again last week, announcing that she has already decided four of the five who will definitely take spots on the team going to Rio.

“We have not only formed the backbone of the Russian Olympic team, but we have already decided the disciplines of those going,” Rodionenko told All Sport on Thursday. “Our leaders Mustafina and Komova will perform in the all-around. In the team competition, Afanasyeva and Paseka will join them.”

Rodionenko went on to explain where each will join the team, noting that all but Mustafina just became champions on each event at the Toyota International meet in Japan last week, with Paseka winning vault, Komova winning beam, and Afanasyeva winning floor. She noted that Spiridonova was also among the event gold medalists in Japan, and could contribute at the Olympics, though she isn’t yet part of the “backbone” of her team.

It’s interesting that Mustafina is. Rodionenko claims Mustafina could win medals everywhere but vault, despite Mustafina not having trained seriously since last summer. She is only just now ending her recovery from surgery, comes back to the gym on January 6, and won’t return to full training until February, giving her less than six months to get back in fighting form. Her first meet back is expected to be the Russian Championships in March.

When we last saw Mustafina, she won the all-around and bars titles as well as the silver medal on floor at the European Games in Baku this past June. She looked good there, if not exactly at her competitive best, but if she could get back to even that level she’d still be the strongest all-arounder in her country at the moment.

As we saw at worlds, the team qualified only one gymnast – first-year senior Tutkhalyan – into the all-around final after Daria Spiridonova choked on beam in prelims. Kharenkova, the 2015 European silver all-around medalist, could’ve fit in alongside Tutkhalyan, but Spridonova was given the nod after her Russian Cup win. It was a situation similar to the “Raisman or Nichols?” all-around qualifications question in the United States, and in both situations, the national team leaders made the incorrect choice.

Without Mustafina, the team is specialist-heavy, and those who do perform all four events don’t stand out enough on more than one event to make much of a splash. In fact, it’s the rising seniors – Melnikova, Skrypnik, and Kapitonova – who are the big all-around hopefuls right now, especially as they begin to upgrade their routines to senior-level sets for the new year. The problem with these, however, is that they share the good old Russian consistency issues that keep gymnasts like Tutkhalyan, Spiridonova, and Kharenkova from truly reaching their all-around potential.

Rodionenko did name Komova as the all-arounder she wants to see alongside Mustafina in finals next summer, however. At worlds this year, Komova competed everywhere but floor, an event she has eschewed for most of this year in order to focus on perfecting her bars and beam. As the worlds co-champion on bars, she has been mostly strong there all season, hitting eight of her twelve routines, though beam has been rough, with only about half of her routines hit and only three at a level that would be useful internationally.

Komova actually did perform on floor once, in her international comeback at the European Games, where she earned a 13.3 for a shaky set. But if she hit that score in qualifications at worlds to add to her 15.033 on vault, 15.3 on bars, and 14.533 on beam, she would’ve qualified into the all-around final with a score of 58.166, good enough for second place behind Simone Biles, which is kind of hilarious and amazing.

It seems that she is actually the country’s best all-around bet at the moment, and that’s with a scrappy basic floor routine. With Komova hoping to peak for next summer and assuming Mustafina returns at least to the level we saw last summer, all-around spots are covered and it would bode well for the team to include Spiridonova as the fifth member, if only because she’s a strong shot at bars gold. Beam in this scenario is definitely a major weakness, but unfortunately their strongest beam workers Tutkhalyan and Kharenkova aren’t known for delivering there under pressure.

It’s definitely odd that Rodionenko would voice the plans for her Olympic team nearly nine months before they’re set to begin, though it’s not as if she’s sitting on national secrets and can whip out a secret weapon a month before the Games. The Russians have more depth than usual, but not enough to make the puzzle a really confusing one. The four already named are obvious choices, and unless something changes in the coming months, the fifth spot is pretty obvious as well.

Now for the Romanians. You may have read about the return of Octavian Bellu and Mariana Bitang, back in business after the team failed to qualify to the Olympic Games at worlds in October.

The team will fight for a team spot at the test event in April, a first in program history. The Romanians have won team medals at every Olympic Games since 1976, so the return of these leaders as of December 15 is expected to turn things around in order to keep the trend moving in the right direction.

Right now, they’re hoping for the healthy return of two-time Olympian Catalina Ponor, who is still in the gym and training, working hard on her recovery from the injury that kept her out of this year’s worlds. Her 2012 teammate Sandra Izbasa, who also medaled at the Games in 2008, is not currently in the mix.

“I don’t know if I will be ready to join the team by April to help at the test event,” Izbasa told MediaFax. “I want to be healthy and to begin training again. If it works out, great. If not, fine. Physically, I feel good, and I have set goals to meet. But my comeback is more difficult because I need to be back on all four events. I won’t go [to the Olympics] with just two or three. If I have a respectable showing in competitions, I will go, but if not I’m pleased with what I’ve done so far and won’t regret trying.”

The federation also announced the transfer of several gymnasts from Izvorani to Deva, meaning they are no longer considered serious contenders within the program and will not be part of the training squad for the Olympic Games. This group includes former worlds team members Andreaa Munteanu (the reigning European beam champion) and Stefania Stanila, both of whom were reportedly relaxed with their training this year and are no longer at an international elite level. The remaining transfers include Stefania Orzu, Asiana Peng, and Cristina Vrabie, and in addition, Ioana Nicoara and 2014 worlds team member Paula Tudorache are no longer part of the national team.

Both of these legendary programs had major problems this year, with Russia failing to reach the podium and Romania failing to reach the team finals at worlds. And they both seem to be taking early approaches in solving these problems going into the Olympic year, as Russia focuses on the formation and fine-tuning of their team months in advance and Romania brings in ghosts from gymnastics past to work their magic.

In both situations, the problems are mostly one-time fluke disasters, as Russia would’ve won a team medal had they not fallen four times in the final and Romania would’ve qualified past prelims had they not imploded on bars. But both problems are indicative of actual deep-rooted issues in each country’s program. It remains to be seen how these short-term solutions will help the teams in 2016, and I think that both are on the right track to redemption. But after the upcoming Olympic year, I think it’ll be even more important to sit back and draw up plans for more foundational changes to keep them competitive in the long run.

14 thoughts on “Checking In On Russia and Romania”