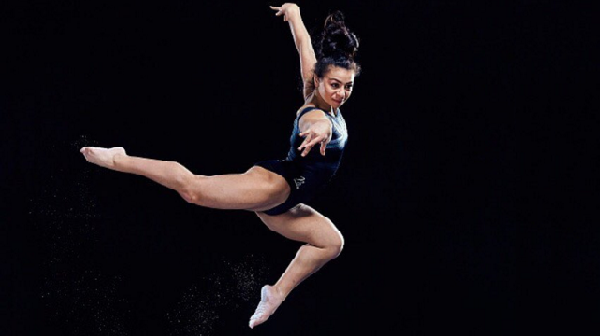 The lineup for the World Cup in Glasgow has undergone many changes since it was first released in January.

Due to an injury, Maegan Chant of Canada has been replaced by teammate Madison Copiak and Vera van Pol of the Netherlands will replace her teammate Lieke Wevers, who is not injured but wasn’t yet ready for competition. In addition, Kelly Simm of Great Britain, Xie Yufen of China, and now Maria Kharenkova of Russia have all withdrawn, with Germany’s Elisabeth Seitz stepping in as a replacement.

The remaining competitors in the list of seven include Claudia Fragapane of Great Britain, Enus Mariani of Italy, Asuka Teramoto of Japan, and MyKayla Skinner of the United States.

Though she was only an alternate for the worlds team last year, Skinner is coming into this competition as the one to beat. She has looked fantastic in training so far this year, hitting this super impressive Amanar a couple of days ago, and with hit routines she’s capable of reaching 58+ in the all-around, putting her in a really good place at the top of the field. It’s a good reminder that while she’s not considered the ‘best of the best’ at home, she is still a dominating force internationally, a testament to the immense depth in the United States.

Fragapane also has a lot to offer and has the benefit of competing at home, though I’m leery as to where she stands right now. Due to injury, the last time she competed all four events was at European Championships nearly a year ago, though she looked absolutely fabulous on vault and floor at worlds in October. She tends to start out a bit weak at the first meet of the season and build from there, and her generally low-scoring bars are a bit of a mystery, so I’m still at a loss as to how she’ll do tomorrow. If she hits all four, she could be fantastic and has the ability to challenge Skinner…but if she really struggles, especially the way she did in her first meet last year, we could see her at the bottom of the barrel. In the interest of a good meet, I’m hoping for the former.

Another big contender is Teramoto. She is generally a pretty consistent competitor with pretty solid routines everywhere but floor, and if she hits everything, she could end up in the 56-57 all-around zone pretty easily. Her Rudi vault boosts her quite a bit if she hits, though it’s something she has struggled with several times in the past, and both her bars and beam should score well enough to make up for a lower score on floor. But hitting will be key, so let’s hope her game is on this early in the year.

Then there’s Seitz, who on paper should be a top contender for the podium, but who often struggles with hitting all four events when it counts. She’s fortunate to have already competed once this year at last weekend’s National Team Cup in Germany, winning the bronze medal even with a fall on bars. Realistically, she’s capable of scores in the high 55-low 56 range on a good day, but she really does rely on a big score from the uneven bars to carry her through. Last year, she competed on bars 13 times and had only two routines with falls, which is a fantastic record, but her struggles on beam and floor often left her short at big meets like the European Games and the all-around final at worlds.

Mariani won’t challenge for the podium unless she has a perfect day and one of the above four makes big mistakes, though if she comes in strong and hits all four, she’s capable of a solid score in the mid-55 range. She’s competed at two of Italy’s Serie A meets so far this year, meaning some of the new-season jitters are out of the way. Last weekend, she added an inbar into her Jaeger on bars – a great upgrade for Italy! – but didn’t count the Jaeger and counted a fall there. However, she was third-best on beam with a 14.0. In February, she had the highest bars score of the meet but had a disastrous beam for just an 11.35. Clearly, when she hits her scores are good enough to make her one of the top gymnasts on each event in her country, but whether she can make it through from start to finish without issue is the big question.

I don’t think Copiak or van Pol will put up much of a fight, with Copiak earning two mid-53 range scores so far this season at Elite Canada and Gymnix and van Pol averaging about a 52 in 2015, but again, you never know what can happen, especially with Copiak. While her routines don’t boast much in terms of difficulty, she is generally quite good at staying consistent with everything, so it would be cool to see that carry over here. But generally these two, both of whom are subbing in for teammates and weren’t on their respective worlds teams, realistically will not challenge.

The Glasgow World Cup begins tomorrow at 1 pm local time (Glasgow is five hours ahead of EST). For more information, including how to watch, check out our coverage guide.

6 thoughts on “Seven Gymnasts Will Compete in Glasgow Tomorrow”