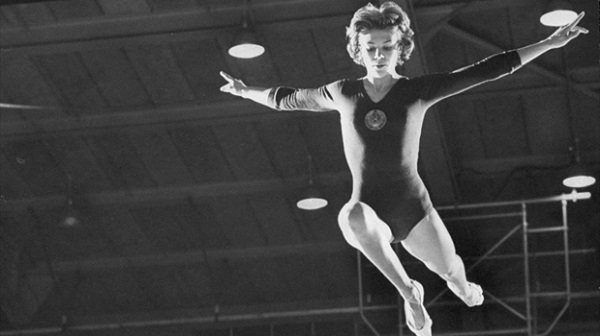 Larisa Latynina of the Soviet Union

The 1956 Summer Olympics were held in Melbourne, Australia from late November to early December. It was the first Olympics in the southern hemisphere, and the schedule was adjusted so that athletes would compete during an Australian summer. Despite its nickname as the “Friendly Games” due to the smooth planning and execution of the event, Cold War tensions still lingered and influenced the outcome of the Olympics. For the first time, the Soviet Union won the overall medal count, and its women’s gymnastics team solidified its dominance with more victories. Significantly, the Soviet Union’s greatest rival in gymnastics at these Olympics was Hungary, a country that was at that time rebelling against Soviet occupation.

Hungary had been under Soviet control since the end of World War II. Hungarians became increasingly dissatisfied with the authoritarian regime in the 1950s, and in October of 1956, violent demonstrations arose and spread throughout the country. The Red Army invaded Hungary on November 4 and stamped out the rebellion. Over 20,000 Hungarians were killed and many more were imprisoned or fled the country as refugees.

Athletes flew from Hungary to Australia for the Games as the revolt was ongoing, but many nations chose to boycott due to the Soviet presence. The Netherlands, Spain, and Switzerland would not attend, and China would not compete due to Taiwan’s presence. Egypt, Iraq, and Lebanon also boycotted the games in protest of the Suez Crisis. Overall, this resulted in a decrease in total athletes of over 1,500, though with none of the boycotting countries being big gymnastics powers, this likely did not affect the outcome of the women’s gymnastics events.

Despite the absence of countries that objected to the Soviet Union’s actions, the Hungarians were still present, and this caused considerable tension, especially in the now-infamous water polo match that took place on December 6, 1956. The Hungarian team, who knew of the results of the rebellion but many of whom had no news of their friends and families, sought to use the match as a way to assert national pride. The Hungarians had won the water polo event at the previous Olympics, but the Soviets had studied their methods in preparation for Melbourne. The result was a violent match, spurred in part by a passionate audience, that ended with one Hungarian bleeding from his head, earning the event the moniker the “Blood in the Water Match.” Hungary won the match 4-0, and they went on to defend their gold medal.

Similarly, the Soviet Union and Hungary were matched up in the women’s gymnastics team competition, where they had gone one-two for the 1954 World Championships in Rome as well as at the 1952 Olympics, enough competitions for a healthy rivalry to develop, with Czechoslovakia coming in third both times. Counting a loss at the 1954 Worlds, Hungary brought four members of that team to the Olympics, while the Soviet Union brought three.

The all-around podium in Melbourne

For the first time, the team final would also count as the all-around and event final qualifications, and those events would be held separately from the team final, with all events being spread over the course of eight days. Each team had eight athletes, with only six competing, and a country without a team could send up to three individuals. A total of 54 athletes competed in teams for nine countries, with eleven athletes competing as individuals for six countries. All athletes competed compulsory vault, bars, beam, and floor routines on November 25, with optionals on November 27. For the final time at the Olympics, the women competed in a group portable apparatus event, which took place on November 29. Each apparatus was scored out of ten, and the top five scores from each apparatus were totaled and added to the portable apparatus score to get the total score.

The Soviet Union won the team final, pulling ahead of Hungary by 1.3 points, with 444.8 to Hungary’s 443.5. By the end of the second day of competition, after the optionals round, the Soviet Union had pulled ahead of Hungary by small margins on vault, beam, and floor with Hungary ahead on bars and trailing the USSR with 368.30 to 370.80. Hungary tried to close the margin with the portable apparatus final on November 29, and while they won gold on that event, when the portable apparatus scores were added to their apparatus totals, Hungary still trailed the USSR and they took silver.

Rounding out the podium was Romania with a total of 438.2, winning their first world or Olympic medal, and knocking Czechoslovakia down to fifth, behind Poland in fourth. For modern gymnastics fans, this podium would look more familiar than that of previous Olympics, with Russia and Romania filling spots. (Interestingly, Bela Karolyi appeared at these Olympics with Team Romania, but not with the gymnastics team. Karolyi was a hammer thrower for the Romanians, but was unable to make it past the qualification round.) Later, Elena Leuşteanu would win Romania’s first individual medal, a bronze on floor. The rest of the standings were made up of Japan in sixth, followed by Italy, Sweden, and the United States team, who came in last with 413.2, over fifteen points behind Sweden.

The individual all-around and event finals were each held on different days between December 1 and 9. The USSR’s Larisa Latynina followed her world all-around win with a gold medal-winning performance in the Olympic all-around, edging out veteran Olympian and 35-year-old Hungarian Agnes Keleti by three tenths of a point. Latynina followed up this performance with a gold on vault, a silver on bars (0.133 behind Keleti), and tied with Keleti for a gold on floor, leaving her with six medals (including the USSR’s bronze in the portable apparatus event). Despite already becoming one of the most successful gymnasts ever at this point in her career, it was just getting started, and Latynina would help establish the Soviet powerhouse for years to come.

Keleti also left these Olympics with six medals, but she also departed as the most successful athlete at these Olympics, with four golds and two silvers. Keleti followed up the team silver, portable apparatus gold, and all-around silver with golds on bars and beam, and defended her 1952 floor gold. Keleti’s achievement is all the more impressive considering her circumstances at the time: Keleti, a Jewish woman who had managed to evade capture during the Holocaust, had left her war-torn country for the Olympics, and her mother was presumed dead. On November 14, Keleti, along with nine other members of Hungary’s Olympic Team, was relieved to receive news of her family’s safety. Her struggles were not over, however. After the Olympics, many Hungarian athletes, including Keleti and most of the rest of the Hungarian gymnastics team, decided that they could not go home. Out of the 102 athletes that Hungary sent to the Olympics, more than half of them defected. Keleti, who is now 95 and says she still does the splits, is remembered as one of the best gymnasts of that era. 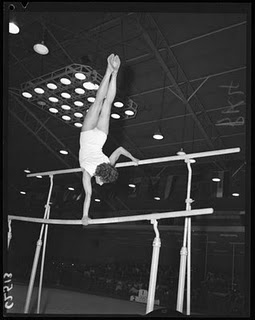 This Olympics, however, is the one in which the Soviet Union showed themselves as a powerhouse in women’s gymnastics, repeating their team and all-around gold medals, as well as a country that would continue to stir controversy in the future. The gymnasts at this Olympics would also solidify the importance of artistry in their sport. The beauty of their technique was noted and celebrated, and you will also notice from videos of routines (women start at 15:55 here) the steady progression in difficulty. Czech gymnast Eva Bosáková performed the first cartwheel on beam at these Olympics, and you can see the increase in difficulty on all four events, notably on floor, where dance elements seamlessly blended into acrobatics. With the solidification of the USSR as a powerhouse and a team known for their grace and beauty, the introduction of Romania, and the boost in difficulty, these Olympics give us a hint of the transitions that went in place to bring us to the modern era that we know today.

2 thoughts on “Our First Powerhouse: Women’s Gymnastics at Melbourne 1956”