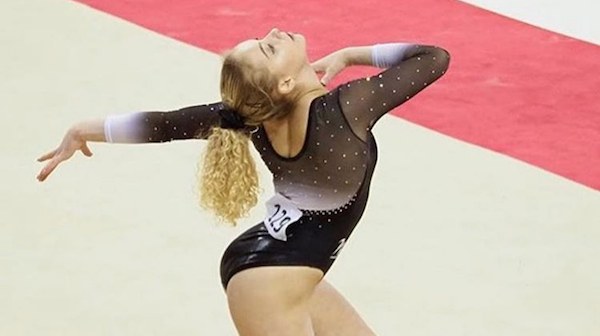 It was a busy weekend in Guimaraes for Maisie Methuen of Great Britain, who won the beam and floor titles in super tight battles on both events, while Yeo Seo-jeong of South Korea won the vault title in her senior debut, and Ahtziri Sandoval showed fantastic work on bars to win gold there.

I was super excited to see that Yeo actually debuted the long-awaited handspring front layout with two twists in qualifications. It’s a vault that Alicia Sacramone planned on competing a few times, and one that Oksana Chusovitina has also trained, but Yeo actually went for it this week, and though she fell, she managed to get it credited as the double for a D score of 6.2, which is incredible and I hope it’s something she’s able to perfect in the future.

Yeo stuck to her DTY and handspring Rudi in the final, taking a step out-of-bounds on the first, and though she fell on the Rudi, she still managed to take the title by half a tenth with an average of 13.675 thanks to her difficulty giving her a 1.6 point advantage ahead of the rest of the field.

Gabriela Janik of Poland performed two strong vaults to get the silver medal with a 13.625, while Victoria Mata of Mexico was absolutely lovely in her own sets, putting up the highest combination of execution scores to earn the bronze with a 13.475.

Also competing in the final were Laurie Denommee of Canada in fourth with a 13.400, Tijana Tkalcec of Croatia in fifth with a 13.350, Sandoval in sixth with a 13.325, Sara Peter of Hungary in seventh with a 12.925, and Emily Thomas of Great Britain in eighth with a 12.775. Thomas came into the final in second place, and though she hit her Yurchenko 1½ with just a step out-of-bounds, she then unfortunately crashed her tsuk full.

Sandoval topped the bars podium with an absolutely gorgeous set that included a shaposh to Pak, Maloney to bail to toe shoot, toe full to huge Gienger, and a stuck full-in for a 13.450, her highest bars score this quad. It was an incredible effort from the veteran of a mostly young Mexican program, with such a great focus on details, giving her a three-tenth lead over the other competitors.

Coming in for the silver medal was Filipa Martins of Portugal, who had a clean routine of her own aside from a slight muscle-up on her blind change into her piked Jaeger, which she caught close to the bar, and then a little bounce on her double tuck, earning a 13.150.

Behind her, I was thrilled to see Helena Bonilla of Spain get the bronze in her first international appearance in over two years! Bonilla got injured at a Serie A meet early in 2017, but she looked like she hasn’t missed a day in this competition, showing just slight form breaks in a routine that included a Maloney to Pak, toe full to Tkachev, and stuck full-in. Bonilla posted a 13.100, securing a spot on the podium in addition to beginning to make a case for herself for Spain’s big teams to come later this year.

Ilaria Käslin of Switzerland came in a close fourth place, earning a 13.000 for a mostly clean set, though she lost her rhythm a bit before her toe full to bail to toe-on to Ray and she was a little close to the bar on her double pike. Denommee was fifth with a 12.400 for a hit routine with some form issues, her teammate Isabela Onyshko was sixth with the same score after falling on her Tkachev, Janik was seventh with an 11.150 after a couple of pauses on the apparatus, and Stefanie Siegenthaler of Switzerland was eighth with an 11.050 after coming off on her clear hip full.

Methuen had an incredible start on beam with her back handspring mount, clean flight series, and a double wolf turn, which the crowd loved. Her double full dismount almost went to her knees, taking her E score down a bit, but she still managed to be the most successful in the bunch, posting a 12.850 to take the gold. This was Methuen’s second world cup after debuting at Cottbus in 2017, but it’s the first time she walked away with some hardware, so I’m sure she was thrilled that it ended up being the gold.

Denommee got the silver medal on beam, hitting her routine well to post a 12.600, with her double pike dismount the highlight. Again, like on bars, Onyshko matched her score identically but lost the tie-breaker due to a fall, this time on the tuck full in her acro series, though her difficulty was high enough and the rest of her routine solid enough to secure the bronze, with her switch leap to side aerial to jump series a highlight.

Martins placed fourth with a 12.250 after falling on her split leap to side somi, Katarzyna Jurkowska-Kowalska of Poland was fifth with a 12.150 for a hit routine with a few wobbles, Thomas was sixth with an 11.800 after showing a few form issues and wobbles in addition to landing her double pike a bit short, Nora Feher of Hungary was seventh with an 11.350 after splitting the beam on her flight series, and Siegenthaler was eighth with a 10.750 after missing her front aerial.

On floor, Methuen was fantastic, showing a big tucked full-in, a super clean front layout to front full, and a solid double tuck to finish, putting up a 13.100 to get her second gold of the meet. Onyshko had a super long wait, though she hit here after a rough start to the meet for her, tying Methuen’s score but getting the silver medal with her execution not quite as strong.

Denommee took the bronze with a 13.000, showing off her immense power with a big full-in double layout followed up with a double layout that she stuck cold, and Thomas matched her score with a solid double layout of her own, in addition to nailing a whip to full-in, but she missed out on the podium with her E score a couple of tenths lower than Denommee’s, placing fourth.

In fifth was Feher, who hit all of her tumbling well for a 12.200, Mata was sixth with a 12.100, showing a nice front through to double full, Bonilla was seventh with a 12.000 with no major mistakes but just a few steps on landings that held her back from getting a higher E score, and Christina Zwicker of Croatia was eighth with an 11.750, showing a great performance quality with her Carmen routine, though she took a few steps out-of-bounds on her double pike in addition to stepping on some of her other landings as well.

In the men’s competition, guys from North and Central America took five of the six gold medals, a nice surprise at a competition typically dominated by Europeans and the Japanese.

Jorge Vega of Guatemala won floor with a 14.350, showing some mistakes, but his difficulty held him afloat, giving him a half-tenth lead over Takumi Sato of Japan in second with a 14.300 while Rayderley Zapata of Spain took the bronze with a 14.100 for his clean set.

The pommels gold went to Thierry Pellerin of Canada, who worked incredibly well throughout his difficult routine, earning a 14.350 to top the overall messy field by nearly a point. Zoltan Kallai of Hungary ended up getting the silver with a 13.500, while Koki Maeda of Japan won the bronze with a 13.500.

Larduet also won the p-bars title, this time by a pretty large margin, getting a 15.100 for his absolutely gorgeous routine, putting him half a point ahead of Muntean with a 14.600 for silver, while Henji Mboyo of Switzerland surprised to take the bronze with a 14.350, and on high bar, David Vecsernyes of Hungary won the gold with a 14.050, defeating Cuba’s Randy Leru, who got a 14.000 with some mistakes to earn the silver, while Kevin Cerda of Mexico won the bronze with a 13.650.