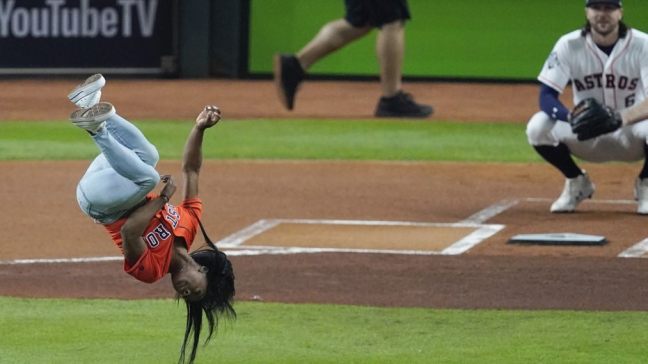 “My friends: Did you see Simone Biles just—

-We know, non-gymnerds. We knew before you did, we know more about it than you do, and we knew your text was coming.

The Brabant Trophy happened. Sanna Veerman and Bart Deurloo won the Brabant Trophy, a pairs competition where each woman was forced to dance with the smelly boy for PE do-si-do. They were followed by Angelina Melnikova and Ivan Stretovich, and Tisha Vollman and Casimir Schmidt. I’m told there were falls all around.

One more thing. Now that we’ve all calmed down a bit, here are Lauren’s thoughts on the women’s team final at this past worlds.

Maggie Haney case moving slowly. MG Elite coach Maggie Haney, who’s been accused of verbally and emotionally abusing gymnasts, has yet to have a disciplinary hearing even though USAG received the first complaints over three years ago. USA Gymnastics says the delays are because the org is having trouble finding an athlete to sit on a hearing panel. Meanwhile, parents and athletes are frustrated by the lack of progress in the case, and Haney’s attorney blames USAG for the holdup.

Parents of Legacy Elite gymnasts are also angry about delays and a lack of communication from the U.S. Center for SafeSport regarding similar complaints against former USAG athlete rep Anna Li and her mother Jiani Wu.

Reform in Romania. In response to Romania’s performance at the recent world championships, the Romanian federation has decided to decentralize the system, with gymnasts now training at their respective clubs instead of with the rest of the national team.

MSU news. Former Michigan State University president Lou Anna Simon will stand trial for allegedly lying to investigators about how much she knew about Larry Nassar’s abuse, a judge decided on Monday.

Upgrades. Upgrade season is upon us!!! For the U.S. women, Sunisa Lee is trying out some new stuff on beam, Jordan Chiles’ front triple made an appearance, and Konnor McClain also has some new tricks on beam.

This week, we were also treated to Fusuka Maeda’s triple back over the bar, a double-twisting double front from Daniel Mendieta, and Jennifer Gadirova training an Amanar.

Comebacks. Does this mean Laurie Hernandez will be at the next national team camp? We shall see.

Retirements. Oksana Chusovitina says she’ll retire after these next Olympics. Yeah, and my diet starts tomorrow.

Simone threw a ball. Simone Biles did a standing full in jeans and sneakers before throwing the first pitch at Game 2 of the World Series. Then an Astro man signed the ball for her, Simone, the greatest athlete of all time. Right.

She might get her nose pierced. Simone wants to know what she would look like with a nose stud. The answer? Amazing. DO IT SIMONE.

Chellsie is sick of wolf turns, too. So that’s over. No more wolf turns.

Shawn dug up an old friend. Shawn Johnson decided to see if her 2008 team final leo still fits over her 40-week-old baby bump. Spoiler alert: It does!

Day one of my sugar cleanse is going very well, thank you. My head is full of sand.

14 thoughts on “Around the Gymternet: I’m in a glass case of emotion”