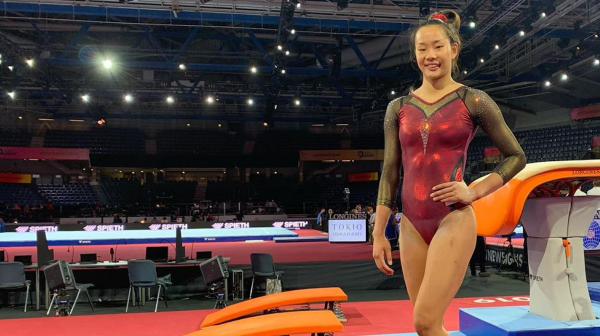 I’m excited to bring to you a new series that introduces fans to each of the gymnasts, both MAG and WAG, who has already qualified to the 2020 Olympic Games, which will now be held in the summer of 2021.

First up on the list is Sze En Tan from Singapore, a 19-year-old who earned the last possible all-around spot at world championships last year, earning the reallocated host country berth after the Japanese women qualified a team.

Tan first came into prominence when she swept Singapore’s national championships in her first meet as a senior back in 2016. As a first-year senior in an Olympic year, she didn’t have a chance to contend for an Olympic berth as Singapore hadn’t qualified any spots at the Olympic Test Event, which served as the qualifier for individual athletes, so she set her sights on the next quad with 2020 her Olympic goal.

In that first year, Tan received several international assignments, finishing 11th all-around at Pac Rim Championships before competing in qualifications on all four events at the Anadia Challenge Cup, and then following the 2016 season, Tan moved to the United States with her family so she could begin training at Legacy Elite, something that would give her a leg-up in her elite-level training while also giving her a better chance to be recruited by an NCAA program (spoiler alert – it worked).

Though she missed the 2017 season due to injury, Tan returned early in 2018 at a U.S. elite qualifier, using the competition as a bit of practice going into her international season (she wasn’t eligible to actually qualify to elite in the U.S., but her score of 51.150 would have been enough to reach the U.S. Classic). Tan went on to compete at the WOGA Classic before winning her second national all-around title in Singapore, a feat that earned her a spot on the Asian Games team, where she competed on beam and floor.

An injury and subsequent surgery continued to limit Tan to just beam and floor in 2019, and she played it safe throughout the majority of the season with the hopes of being at full health in time for worlds. Her first competition back on all four events as at the Paris Challenge Cup, and then it was time for worlds, the test that would determine whether or not she’d compete in Tokyo.

Tan had an incredibly solid competition in Stuttgart, performing a clean Maloney to Pak and van Leeuwen on bars, hitting her beam set, showing a clean performance on floor, and then landing a solid Yurchenko full in her final rotation to finish with a 48.098.

The gymnasts competing in the final subdivision obviously wouldn’t have to wait to find out if what they did was enough to qualify them to the Games, but Tan ended up in a weird limbo of not officially knowing for just over a week. Tan ended up one spot shy of earning one of the 32 available spots, just 0.068 back from officially qualifying, and though she knew she’d get that reallocated host country spot, initially the FIG said they wouldn’t make the reallocated spots official until 2020.

Thankfully for Tan, the FIG ended up officially reallocating this berth the day world championships ended, putting an end to what I’m sure would have been months of anxious waiting. And just one month later, Tan officially signed her NLI to compete at Stanford University for the 2020-2021 season, making two dreams come true in a matter of weeks.

Tan is Singapore’s second WAG athlete to qualify to an Olympic Games, after Heem Wei Lim became the first in 2012. She is a truly talented gymnast who doesn’t have a bad event. Her talent for bars is incredible, and though the surgery she had continues to limit her a bit there, her goal for Tokyo is to compete on this event the way she used to before the injury.