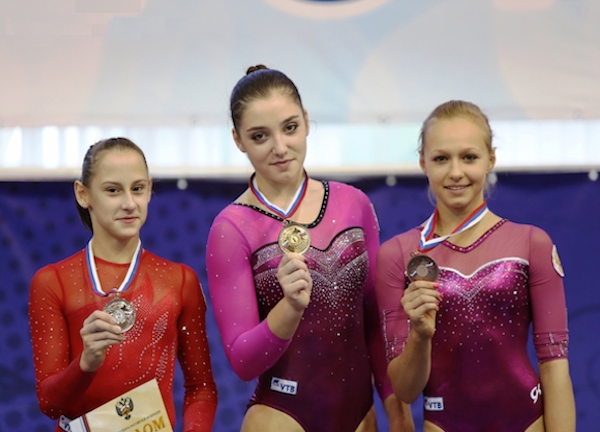 In the final day of competition at the 2014 Russian Cup, Aliya Mustafina proved that nothing – not shoulder pain, not an ankle injury, and certainly not the fact that she was supposed to be allowed to sit out just this once – could get in her way.

After an all-around gold on Friday, Mustafina earned silver in the uneven bar final yesterday and then picked up two more gold medals on beam and floor today, showing that she’s still Russia’s very best and could be an enormous threat at World Championships. While she doesn’t have the numbers to match Simone Biles – does anyone!? – she’s definitely in the race for silver and also has medal potential on everything but vault.

She continued using the sting pad on beam, so clearly her ankle is still bothering her on some skills, but not to the point where she can’t perform. She had a sizable wobble on her double turn, but nailed the arabian to wolf jump before continuing on. Her series had changes again, likely to decrease the risk of a fall or missed connection. The switch half to Onodi was hit, but she had a fantastic fluid connection on the next bit – a side aerial to sissone to front aerial to front aerial to back handspring. Just gorgeous. The connection between the last two elements was perhaps a bit late, but I loved the sissone into the first aerial. Oh, and she stuck her double tuck dismount, perfectly capping off an amazing routine.

Behind Mustafina for silver on beam was Maria Kharenkova, who earned a massive 16.2 on her first day in qualifications but showed problems here. Her bhs bhs layout series normally looks easy for her, but her layout was slightly piked and she landed it with a huge wobble and her leg coming up. Her turn series was excellent and she took just a step out of her double pike dismount, making the layout her biggest problem but in addition to losing execution on form, she also lost about six tenths in difficulty between qualifications and finals.

Daria Spiridonova was in bronze medal position, showing a lower difficulty routine with more form breaks than her compatriots. I do love her switch to Onodi series, and she did a nice full-twisting back handspring which looked a little jerky in the twist but I just love seeing them.

Strong contender Alla Sosnitskaya unfortunately had an insecure routine, though fell on the illusion turn in her side aerial to illusion connection, coming in 7th.

In Mustafina’s first real hit floor routine of the week, she stuck her double arabian opening pass before jumping up into a stag. Good, impressive, but nothing beats her turn series…a triple Y turn into a double turn in passé. Just…unbelievable. I haven’t seen Memmel turns that look as good as that triple! She hit the 2.5 to front full with no problems and nearly stuck the double tuck, choosing to perform her final pass much earlier on in the routine than most would, which I loved because it showed a real focus on the dance.

Daria Elizarova, who fell on beam, hit her floor routine that included a 2.5 to front full, a triple full, and a double pike. She brought in silver, and like Ekaterina Kramarenko, has been one of my favorite Russian stories of the year, even if she doesn’t have quite the difficulty she needs to contend for the world team. Kharenkova rounded out the medal position with a bronze. Sosnitskaya, having a bad day, finished just outside the medals in 4th.

One thought on “2014 Russian Cup: More Gold for Mustafina”