2014 Arthur Gander Memorial champion Daria Spiridonova and teammate Nikita Ignatyev of Russia won this year’s Swiss Cup in Zurich, Switzerland with an even 30 points split between them in the finale. The pair snuck in ahead of Ukraine’s Angelina Kysla and Oleg Verniaev, who were ahead by six tenths in the semifinals.

Sadly, Switzerland’s Giulia Steingruber suffered a ligament injury to her foot after crashing her vault in the final round of competition. She had a remarkable day otherwise, hitting the same vault earlier in the evening and showcasing one of her best floor routines all season, but a miscalculated block on her Rudi made her unable to complete the vault, and though she tried to control the fallout, she ended up unfortunately doing damage to her foot.

The first half of competition featured all ten teams with Germany’s Elisabeth Seitz and Fabian Hambüchen in the lead. They picked up a 58.00 after Seitz hit solid bars and floor routines and Hambüchen nailed floor and high bar. The Ukrainians were just a tenth behind, with Kysla turning in clean performances on floor and vault and Verniaiev hitting rings and killing it on parallel bars.

Russia and Romania, featuring Larisa Iordache and Marius Berbecar, were tied in third to start. Though Ignatyev hit rings and floor for the Russians, Spiridonova showed one of her weaker bar sets, and in the Romanian camp, Iordache struggled with both beam and bars while Berbecar hit vaut and parallel bars.

The French team (Youna Dufournet and Axel Augis) and the second Swiss team (Ilaria Käslin and Pascal Bucher) were both eliminated here, earning 55.2 and 54.95, respectively.

Ukraine led the semifinals with an 86.6; this round featured one event added onto the previous score. Kysla showed a tidy bar set and Verniaiev hit a difficult pommel horse routine to jump into the lead with the first Swiss team (Steingruber and Claudio Capelli) not far behind with an 86.475. Both Steingruber and Capelli performed on floor, both hitting some of their best routines of the year.

The Russians and Germans were tied in third with an 86.0. For Russia, Spiridonova hit beam and Ignatyev hit parallel bars while for Germany, Hambüchen’s parallel bars routine saved them after Seitz fell on beam.

The eliminated teams here included Japan with an 85.025 (Mai Murakami fell on bars, Kenzo Shirai hit vault), Italy with an 85.025 (Vanessa Ferrari showed a weak bar set after showing issues on floor and beam earlier in the meet), Romania with an 84.75 (Iordache didn’t hit a clean floor and Berbecar’s rings difficulty was somewhat weak), and Brazil with an 83.4 (Daniele Hypolito hit beam but Arthur Mariano fell on high bar).

In the final round, gymnasts were allowed to repeat one of their earlier events, with the aim to choose what they thought would be their highest-scoring. The champion Russians went with uneven bars for Spiridonova and rings for Ignatyev, and both were incredibly clean and precise routines. Spiridonova picked up a 15.05 on bars while Ignatyev earned a 14.95 on rings to put them in first place with a 30.0.

For the Ukraine’s final performance, Kysla hit a clean FTY for a 13.725, though Verniaiev was the star of the evening for his nation, earning a 16.0 on parallel bars after an incredible performance. Had he been matched by a gymnast working with equally high difficulty, the Ukrainians would have come out as champions for sure, though their second place score of 29.725 was nothing to sneeze at.

In third were the Germans with 28.85. Seitz hit another solid set on the uneven bars for a 14.55, but Hambüchen unfortunately got lost during his routine on high bar, earning just a 14.3.

While Claudio Capelli hit a clean, if not super difficult, routine on the parallel bars for a 14.65, sadly Steingruber was injured while performing on vault, typically her strongest event. She got no block coming off the table out of her front handspring, and managed to get a front tuck around but landed hard on her feet before rolling out of it, bringing in just a 4.825 for a total of 19.475. 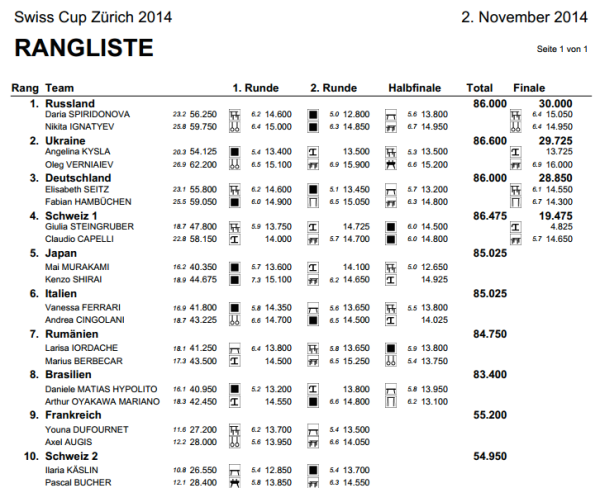