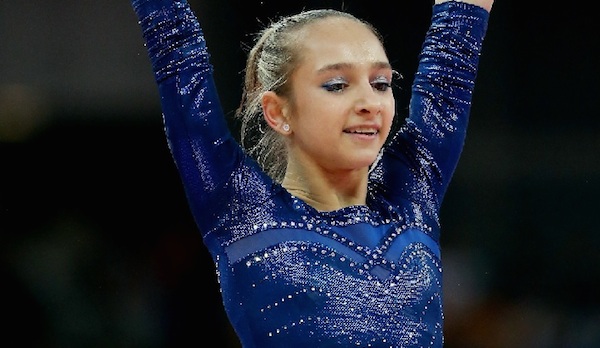 The 2014 KSI-Matsz Cup held in Budapest, Hungary, featured the return of Viktoria Komova to international competition this weekend.

Though she competed at a much lower standard than gym fans may be used to seeing, the Russian Olympic silver all-around medalist seemed to have a clean and relaxed competition. She easily won the bars and beam titles without much of a fight while just missing out on floor gold to Hungary’s Tünde Csillag. Ana Derek of Croatia, who took home silver on vault in Medellín last weekend, was the vault champion in Budapest this week.

On Saturday, the first day of competition, Komova competed and hit all four events. While her difficulty was much lower throughout, she showed very clean execution, especially on her FTY vault.

She showed a bar routine similar to what she competed in Penza two months ago, looking confident throughout. Her Chow to pak salto and Chow half were gorgeous both days, as was her piked Jaeger.

On beam, Komova showed some shakiness on her turns, a full Y turn in addition to a double turn. The rest of her skills were solid if not super difficult, and she dismounted with just a layout but looked tidy throughout.

She showed a simple but clean floor routine, opening with a double back and also featuring some clean twisting elements in addition to a double back to finish (which she stumbled back a tiny bit in her first day of competition).

Full results from the competition are below! Click each athlete’s name to see her event final routine. We will update video links as they become available, and for videos from the first day of competition, check out Fran Elsner’s YouTube Channel.

Article by Lauren Hopkins
Videos thanks to Fran Elsner