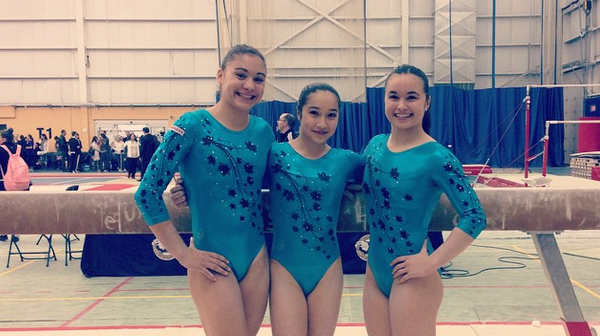 Rose-Kaying Woo, one of two junior Canadian gymnasts selected to compete in the senior session at Elite Canada this weekend because of her 2016 potential, took home the senior all-around title with a 54.800.

The 15-year-old defeated several members of Canada’s 2014 World Championships team, including Isabela Onyshko, who placed second with a 53.650 after counting a fall on the uneven bars after an otherwise solid day. In addition to her all-around win, Woo also brought home silver on beam, where she showcased an exceptionally polished routine and finished just tenths behind Ellie Black.

Elite Canada is largely meant to gauge the shape gymnasts are in at the beginning of the new season. The Canadian federation uses it primarily as a way to identify high performance athletes as well as to select gymnasts for international assignments. Most gymnasts don’t plan on peaking here, so overall the competition is a bit weaker than you can expect at nationals, held later in the season.

This is especially true in the senior field, where a majority of the top-performing national team members stuck to just a couple of events or didn’t compete full all-around difficulty.

Black, who most recently won the silver medal at the Glasgow World Cup in December and is hoping to land on the podium at the American Cup next month, competed just on beam, where she qualified first into event finals and then won the title with a 14.950. In finals, she had a few checks, but overall looked strong and confident, reeling herself in each time she seemed to lose control.

Also sticking to just one event was Victoria-Kayen Woo, who performed just on bars. Woo looked clean in Friday’s competition, but fell in event finals, placing just 6th with a score of 12.900. Ella Douglas and Sabrina Gill, just now returning to competition after injuries kept them out for most of 2014, were also relegated to just bars.

Gill was somewhat phenomenal in her return, showing a huge 5.9 difficulty (second only to Onyshko) and winning the event title with a 14.250 after nailing her set. She has a ton of stalder work, including a Ricna to pak salto and a Chow half, and her work is mostly clean with the exception of a few small form breaks. Canada was incredibly lacking on bars last year, so Gill – who left Dynamo and coach Elvira Saadi for Manjak’s last year – could finally have her day to shine at World Championships if she keeps up the solid work.

Of the new seniors, Audrey Rousseau and Sydney Townsend were solid in their debuts, placing third and fourth, respectively. Rousseau has great potential on bars and beam, while Townsend showed a very clean FTY on vault and she has a very ambitious floor routine that could be great with some attention to detail…in the all-around, she had a hop on her tucked full-in, stepped over to the side on her triple full, and then went OOB on her double tuck. Her whip whip through to double full looked great, however!

Though Sydney Soloski had a rough time on bars limiting her all-around finish to 7th, I thought overall she was strongest of the 1999 babies. She also had a clean FTY and was superb on floor in both the all-around competition and during event finals, where she earned the silver medal with a score of 13.800, just half a tenth behind winner Hélody Cyrenne (who had great landings on her double tuck and double pike passes for a 13.850). Her difficulty is a little low on beam, but she’s very clean there, and placed 6th in event finals with a 13.250 despite a difficulty of just 4.8.

Shallon Olsen is another junior selected to compete with the seniors, though she had a bit of a rough outing. While her DTY on vault is super powerful and consistent (she easily won the senior vault title over 2014 World Championship team member Maegan Chant by a full point!), her start value elsewhere seems to be a bit too much for her at the moment, as she struggles to find a balance between difficulty and execution.

She had issues on bars, beam, and floor during the all-around final, and then again on beam during event finals. She managed to tie for bronze on floor with a 13.350 after hitting most of her skills relatively well, though at this point I’d rather see her work on her consistency before pushing the high difficulty. Of course, it is her first senior meet and she still has a year to go before actually belonging in that age group, so I think once she gets comfortable at this level she’ll be fine. Everyone has off meets, and even if her weekend wasn’t perfect, she still managed 6th place! I have no doubt everything will come together for her as the season progresses. 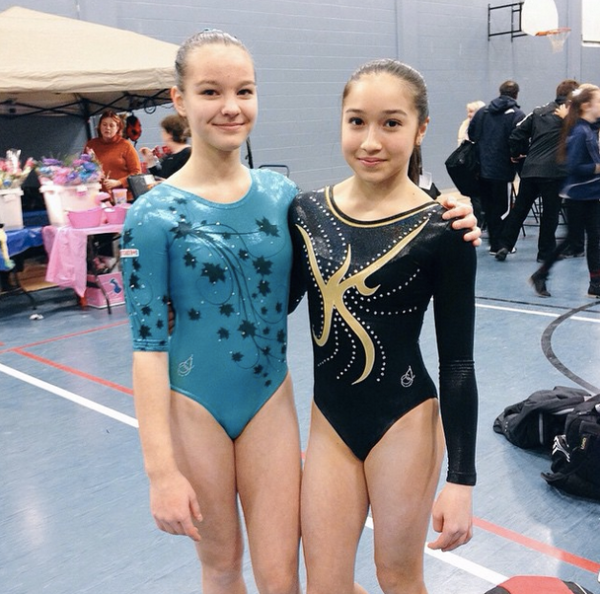 Chant had a pretty rough bars performance, and then also made costly mistakes on beam and floor, placing just 9th in the all-around with a 51.600. I think this is largely due to downgrades in her routines, as she also didn’t compete nearly what she’s capable of on vault, so I wouldn’t count her out for the future just yet.

I was really impressed with the bar work from Émilie Dumont. Dumont was the silver medalist on the event after earning a 13.750 for a polished routine. Her difficulty’s not the highest, but she’s absolutely lovely to watch in all of her routines, with bars being her prettiest. Like Gill, she’s great at stalder work, and includes an Endo in her routine. She finished with just a 45.600 in the all-around (I don’t know what happened to her on beam, but with a 2.650 total execution she must have stopped midway) but if her bars get even stronger as the year goes on, she could be a Worlds option just for the one event.

Like Dumont, Sydney Laird is one who didn’t have the best overall meet (though 13th in a field of 34 was definitely a strong finish!) due to overall lower difficulty and a few mistakes, but she is just lovely and precise in all of her dance elements, so she gets a special mention. She’s the one to watch for the little extra flair of artistry in everything she does, and though there hasn’t been video of her routines just yet, even just seeing photos of her leaps makes me want to see everything in action.

Of course, the big news going into the meet was Victoria Moors‘ return, though she did it rather quietly and without much fanfare. Moors competed just two events – an FTY on vault and a floor routine with lower start values than we last saw her compete – and though no video exists, it seems she did very well on both. Finals didn’t go quite as well, as she earned just a 12.800 for 6th place on floor, though we can’t expect her at her absolute best after she’s been out of competition for eight months. I think she got off to a great start, and expect she’ll slowly bring back her difficulty over the course of the year in order to be competitive for future major international teams.

As far as the juniors are concerned, Megan Roberts of East York Gymnastics absolutely blew everyone out of the water, taking home the all-around, vault, bars, and floor gold and then a bronze on beam.

She earned a 54.050 in the all-around despite a fall on beam, and that’s without any junior bonus scoring – the Canadian federation did away with bonuses after last year, so her scores were the real deal. She debuted her DTY, which could use some work but was mostly powerful, and has steady difficulty across the board, looking especially solid on bars and floor.

Though she downgraded to a clean FTY for the vault final, she won it by two tenths, and won both her bars and floor titles by huge margins thanks to her combination of high difficulty and strong execution. She actually performed much better on beam in finals than she did in the all-around, but Jade Chrobok and Laurie-Lou Vézina placed ahead of her with slightly greater start values and Chrobok’s routine a bit more smooth for a 13.750.

In addition to her beam win, Chrobok also placed second in the all-around with a 52.250, where she looked mostly strong aside from a somewhat messy floor routine, where she also sat her front layout full. In third place for the juniors was Meaghan Ruttan, who earned a 52.200, including a 13.25 for her hit beam routine, capped off with a strong double pike dismount. 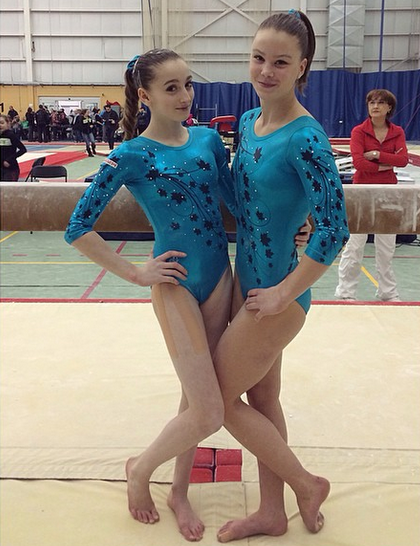 Overall, the Canadians have some work to do if they want to get back on track to make team finals at this year’s World Championships or next year’s Olympic Games, but for an early season meet, they definitely showed that they have a ton of promise, especially in their first-year and soon-to-be seniors.

For more videos, keep an eye out on the Gymnastics Canada YouTube playlist, and to see more photos from the event, check out these snapped by Tom Hsaio for GraceClick.