The first subdivision of the 2015 European Games kicked off with performances from Great Britain and the Ukraine.

The British gals were absolutely lovely in their royal blue leotards. Beginning on vault, Kelly Simm did a Lopez as her first attempt for a 14.233 and then hit her FTY with a hop over to the side for a 13.533. Her form was a little untidy on both, but they were nicely done and she averaged a 13.833 going into the vault final.

Also for Great Britain, Charlie Fellows and Georgina Hockenhull both hit vault with scores of 13.966 and 13.533, respectively, to finish the rotation with a 28.199.

On bars, Fellows had a great routine with only minor form issues. She began with a Chow to pak with slight leg separation on the latter, and then performed a Maloney (also with slight leg separation) to bail (a little bent at the hips) to a toe shoot, an excellent Markelov, a giant full, and a clean near-stuck double layout for a 13.7, her highest bars score of the year.

In Simm’s routine, she had a lot of big skills and came through with a 5.8 start value, performing a toe full, Komova II to pak (with leg separation), Chow, and then her brand new skill, an inbar piked Tkatchev. There’s a Canadian junior also doing the skill right now, Ana Padurariu, and she’s a bit stronger at it. Simm didn’t get quite enough height out of the release and had to bend her knees, tucking her legs as she went over the bar, and then she finished with a double layout, stumbled forward a bit. Her score was a 12.933 there, which the Brits had to count, as Hockenhull got just an 11.166.

The Ukraine, also competing in the first subdivision with a start on vault, began with a 12.533 from Yana Fedorova followed by a 13.733 from Angelina Kysla, who performed an FTY with some slight leg separation at the start and a little bounce on the landing. She was followed by Krystyna Sankova with a clean FTY for a 14.1, helping them to a 27.833 finish after the first rotation. 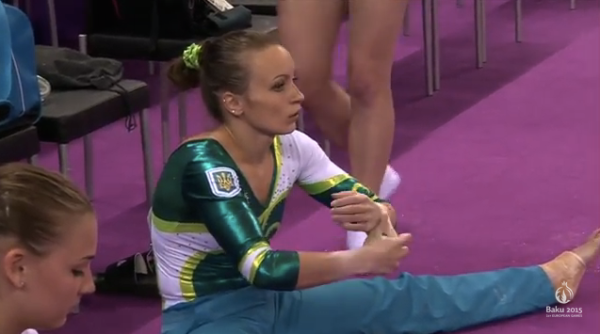 On bars, the team had some problems with Sankova earning a 10.566 followed by a 10.366 for Fedorova, who had a weird fall at the beginning of her routine after she missed a handstand, it seemed. The rest of her routine was quite sloppy, including a Maloney to bail to toe shoot, Jaeger, and cowboyed double tuck. Kysla was the savior of the event with a 13.566 for her 5.7 d-score routine.

Russia began their competition on vault with Aliya Mustafina‘s beautifully stuck DTY. Her form wasn’t great, as she showed her usual leg separation and the one bent knee as she came in for the landing, but the stick was truly excellent, and she earned a 15.133 for her effort. Not bad for her first time back since Stuttgart!

Viktoria Komova‘s return to major international competition since London 2012 was also a DTY. She showed some leg separation and hopped back and out of bounds, receiving 0.3 in deductions for a 14.566, though it wasn’t a bad effort considering it’s her first time doing anything above an FTY in years!

She was followed by Seda Tutkhalyan, who also performed a DTY with a slightly loose body line in the knees and hips, though her legs were together and she landed with just a small bounce for a 14.966. Her Lopez was another story, looking messy in the air, landing with her chest low, and taking steps over and out of bounds for a 0.3 deduction and a 13.966 score. The Lopez was bizarre…she runs down the left side of the vault track and then by the time she lands she’s all the way right. Her DTY was also off-center but not quite as bad…there’s got to be a way to get her running and vaulting down the middle, one would think! 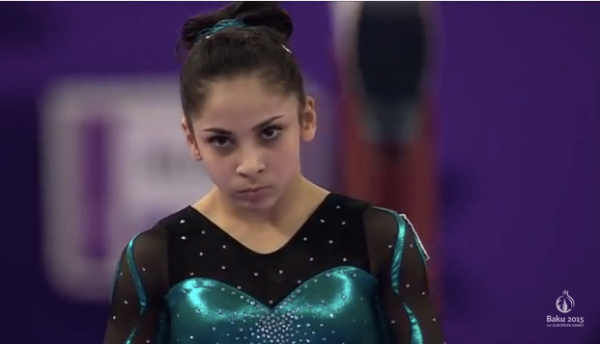 On bars, Tutkhalyan finished her routine with a very nice double front for a 14.166. Mustafina was lovely in her work, hitting her inbar full to Maloney to pak salto to van Leeuwen especially nicely, and then going for an inbar half to big piked Jaeger, a beautiful handstand right on top of the bar, and a toe full-to full in for a 15.2.

Komova’s bars were lovely, with a Komova II to pak to van Leeuwen to start. Her lines looked great, but she did bend her knees on the van Leeuwen…it looked like she still isn’t used to doing that skill at her current height, as she’s so tall she definitely can’t swing between the bars as comfortably as she once did, but it didn’t throw her off (even though she reportedly hit her feet on the low bar, as she mentioned in an interview following the meet). She moved on to an inbar half to piked Jaeger, a toe full to piked Tkatchev, and a full-out dismount with a slight hop over to the side for a score of 14.866, out of a 6.6 d-score.

Also in the second rotation were Denmark, Croatia, and Belarus. For Denmark, Mette Hulgaard had a very clean handspring front tuck with a hop forward for a 13.166, and we also saw Ana Derek‘s bar routine, which was only out of a 2.4 d-score but was very clean, featuring a toe full, clear hip, Ray to high, and a unique back tuck dismount straight from the handstand for a 10.6. 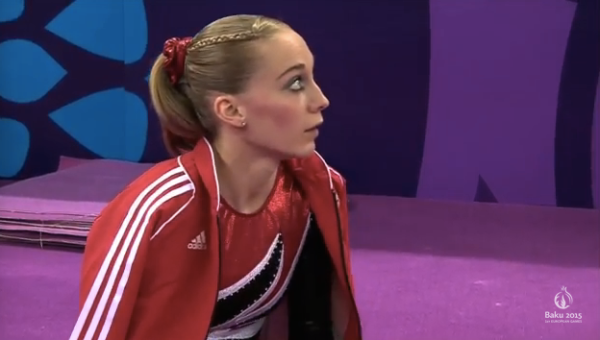 Hulgaard waits for her score.

Aliaksandra Koshaleva of Belarus performed a clean tsuk layout for a 12.666, while her teammate Natallia Yakubava hit her two vaults nicely, including a piked tsuk, to average a 12.7. Yakubava had quite a wait before her second vault, and spent it smiling at the camera instead of showing her nerves.

The adorable Yakubava smiles between vaults while waiting for her score.

Koshaleva was very happy with her vault as well.