The third subdivision featured competitors from Greece, Hungary, and Azerbaijan, as well as individuals Vaida Zitineviciute of Lithuania and Mariana Pitrez of Portugal.

The Greek women began on bars, unfortunately with a fall from Myropi Christofilaki. She had a big Jaeger, but was too far from the bar and missed it. Though she caught it on her second attempt, she had to take an extra swing, and then caught her bail with leg separation, went right back up on a clean toe shoot, and hit her double tuck with a step back, earning just an 8.6. Ioanna Xoulogi went after her and earned a 9.266, which they had to count to their total.

Vasiliki Millousi was a bit better there, performing a clear hip full, front giant full to Jaeger, a bail with leg separation, a clear hip hecht transition, and a double pike for a 12.933. She looked short on a few handstands and seemed to miss one pretty much entirely, but otherwise it was a hit routine for this team. 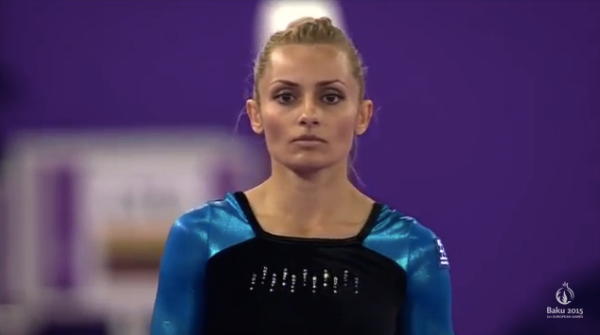 On vault, Millousi performed a Yurchenko layout, which looked clean in the air, just piking a bit before the landing but she barely moved her feet as she hit the mat, hitting a 13.233.

Host team Azerbaijan started on vault, where we saw two vaults from Marina Nekrasova. Her first was a handspring layout half, though it was actually funny because she went through pretty much every body position…she was laid out at one moment, tucked a bit in the air at another moment, and then piked as she went to land. Her tsuk layout form was much better, and the two vaults earned scores of 13.566 and 13.366 for an average of 13.466.

Moving to bars, Yuliya Inshina unfortunately sat her double front after an otherwise iffy routine for just a 10.7, though thankfully this score wasn’t counted as Kristina Pravdina earned an 11.666 and Nekrasova notched an 11.3.

Hungary began on vault, where Dorina Böczögö hit a lovely front pike half for a 14.066, a score matched by Noemi Makra, while Luca Diveky‘s 13.666 was tossed. On bars, Diveky showed a piked Jaeger, a Ray transition, and a back pike dismount straight from the handstand. It was a fairly messy routine, and lacked in difficulty, but her 11.7 wasn’t counted as Böczögö hit for a 13.366 and then Makra came in with an excellent 14.466, a routine that should definitely make it to finals.

Diveky pleased after her bar routine.

The fourth rotation included competition from Switzerland and Germany. Giulia Steingruber vaulted a handspring Rudi with a slight hop to earn a 15.466, and then a very clean FTY for her second vault to earn a 14.233, averaging a 14.849 to take the lead in the vault qualifications. On bars, she earned a 13.066 with a 7.366 execution for a solid yet slightly messy routine.

For Germany, it’s a bit of a bummer because both Elisabeth Seitz and Sophie Scheder earned scores of 15.0 on bars, though due to the one-per-country rule, only Scheder will move on to finals because her execution was one tenth higher than that of her teammate’s. A shame, especially because now the bar final will miss out on a medal-worthy routine and yet gymnasts with scores in the high 13s have managed to qualify.

Israel’s Tzuf Feldon competed as the only individual in the fourth rotation, earning a 13.0 on vault and a 12.133 on bars.