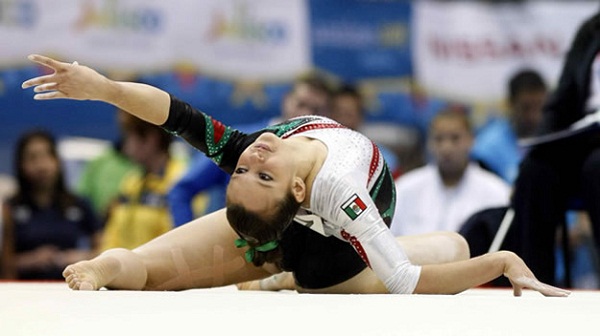 This year’s Mexican Open features some fantastic young talent, highlighting many of those who may not be their country’s top stars but who are often unsung heroes doing fantastic work for their teams.

Ana Lago, a member of Mexico’s worlds team in October, will be the big hometown draw for the competition, which will also feature a good number of others featured at the world championships in Glasgow, including Isabela Onyshko of Canada, Lara Mori of Italy, Ana Perez of Spain, and recent Swiss Cup champion Angelina Kysla of Ukraine.

The competition will also feature the young gymnasts Azumi Ishikura of Japan, who was a member of the Japanese worlds team in 2014, and Nadja Schulze of Germany, who most recently placed 10th at her country’s worlds trials.

On the men’s side, we will see Philipp Herder of Germany, Danell Leyva of the United States, Vladyslav Hyrko of Ukraine, Kevin Cerda of Mexico, Paolo Principi of Italy, Chihiro Yoshioka of Japan, and Nestor Abad of Spain.

The meet features both an all-around competition and a team competition, for which a draw will be carried out to divide the gymnasts into two squads that will face each other for the team title. The gymnasts with the top scores on each apparatus will also be awarded.

On the day following the competition, the annual Gala will be held, showcasing the sport of gymnastics through a more entertaining medium complete with costumes, music, and highly engaging performances. The gymnasts will be “turned into artists,” connecting with the audience through both dance and difficult acrobatic exercises on all eight of the apparatuses that make up artistic gymnastics.

This year, the Mexican Open will take place on November 28 at 6 pm and the Gala will be held on November 29 at 5 pm, both at the Juan de la Barrera Olympic Gymnasium in Mexico City.