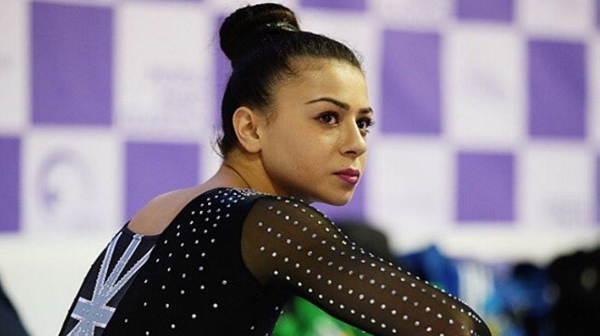 Claudia Fragapane has been one of the most dominating forces on Great Britain’s women’s team since she burst forth with huge results in 2014, winning four gold medals at the Commonwealth Games and then helping her country to its first ever team medal at world championships a year later.

But national all-around titles have always eluded her. In 2014, she was the bronze finisher at the British Championships, having returned from injury late in the previous year and unable to compete at her full potential. In 2015, first-year senior Amy Tinkler defeated her after Fragapane suffered a fall, leaving her with the silver all-around medal (though she did pick up the vault gold). But this year, everything came together for her as she had one of the strongest performances in her career, posting a record-breaking 58.1 to give her a two-point margin over her teammates.

With one of her stronger DTYs in addition to a hit bars routine, Fragapane set up early for a great day. Her huge beam set earned a 14.75 with a standing arabian, layout full series, solid standing full, and a double pike dismount, looking better than she ever has despite a few minor checks and form breaks. Then on floor, she tallied a 14.7 after nailing her full-twisting double layout, Dos Santos, nicely-rotated triple full, and a double layout to stag to finish.

It was a remarkable performance, though she unfortunately followed it up with a full day of less-than-stellar event finals, which had you tallied her scores on day two would’ve left her with a 54.9. It’s risky for your top athlete to go from one extreme to the next, but it seems that Fragapane knows when she needs to be on and knows when she can take it down a notch. Her 2015 season, for example, was mostly weak as she fought through injuries, but she came back at her strongest when she needed to most – in the team final at worlds. This year, the all-around title was her goal and she got that.

Even with the weaker routines, she still managed to walk away with three apparatus silver medals, on vault, beam, and floor. In the vault final, she averaged a 13.787 after landing her DTY out-of-bounds and crashing her messy Lopez. Her bars came with a fall on her Church, if you can call it a Church at this point…her legs were perfectly tucked throughout, so I highly doubt she could’ve received credit for the Church had she caught. With the error, she earned a 12.25 for this routine.

On beam, she stumbled back her standing arabian and had a big but controlled wobble on her layout full, though looked okay elsewhere, especially on her standing full, and she managed a 14.075 for second. Her floor routine also had some blunders, like tucked legs on her Dos Santos and a wild step back on her triple (she could definitely get an extra half twist out of that with her power!), but she stuck her double layout full cold and earned a 14.275 for another second place finish.

With Ellie Downie and Amy Tinkler the favorites to fill out the rest of the podium, their mistakes led to a shocking silver medal for Rebecca Tunney, the 2014 national champion who has been bogged down by injuries for nearly two years. Tunney debuted with lackluster results this year, getting a 54.15 at British Team Championships and a 52.032 at the Stuttgart World Cup due to problems on beam and floor at both. But she managed to hit well in her all-around performance on Saturday, posting a 56.35 after showcasing a messy DTY, a hit bars routine for a 14.45, a wobbly but clean beam (though her flight series is just a back handspring to back tuck and it’s otherwise pretty low-difficulty), and a hit floor routine featuring a great whip to double arabian, a tucked full-in, a 1.5 through to double tuck, and a double pike for a 13.95, third-best of the day.

Like Fragapane, Tunney’s event finals were not as successful. On bars, her routine was going smoothly until her Maloney to pak to stalder connection, as she over-arched the handstand out of the stalder and had to hop off (though I honestly can’t get enough of her Church to Bhardwaj). She still managed fourth with the fall, scoring a 13.325, but I’m afraid even with all of the difficulty it’ll never be a fully high-scoring routine due to all of her minor form issues throughout. Tunney also had a fall on beam to tie for sixth place with a 12.275 and then another fall on floor to place seventh with a 12.2.

Despite her high all-around finish, I’m leery about her chances for this year’s Olympic Games if only because she seems to lack the confidence and flair she had four years ago. That combined with an overall low difficulty and form issues across all of her events, I’m just not sure if she’d make sense on a team coming into the Games with tons of expectations after their historic 2015 performance. She may have won the battle with her strong all-around finish on Saturday, but I’m afraid without some major fine-tuning, she might not get to win the war.

Those with greater chances at “winning the war” include Downie, Tinkler, and Ruby Harrold, who placed third, fourth, and fifth, respectively. All members of the 2015 worlds team, each had falls during their all-around performances that kept them from challenging with higher scores, though I think they’re each capable of outdoing her when they hit.

Downie, who has been dealing with a torn bicep injury since the start of the season which limited her training and kept her out of early meets like the world cups and English Championships, still pulled off the bronze with an impressive 55.25 despite falls on bars. Elsewhere, she had a fabulous vault for a 14.8 and excellent work on beam for a 14.55, though she’s still working on getting her floor back to its full potential.

She did win the vault title, averaging a 14.787 for her DTY and “Mustafina,” both of which looked strong aside from a little stumble on the latter. With a fall on beam in a mostly disastrous final, she placed fourth with a 12.525, and then got another fourth place on floor, where she had a step back on her 1.5 through to double arabian and came in far too low on her 2.5 to punch front tuck, earning a 13.35.

Last year’s national champion Tinkler looked to be having a good day, with great performances on vault, bars, and floor, and she actually added a double double bars dismount into her routine there, which looks great and was a killer upgrade for her. Unfortunately, it just wasn’t her day on beam, where she fell first on her split mount and then again right away midway through her triple layout stepout series. The rest was okay aside from a wobble on a turn, but the damage had been done early, and her otherwise strong day was shattered with an 11.65 there for a 54.7 total.

While a fall on bars in event finals led to just a 12.975 there, Tinkler did come back with a great revenge floor exercise, earning a 14.35 to win gold after hitting her full-twisting double layout (though her second flip was quite piked with her knees slightly tucked as well), a solid tucked double double, a 1.5 through to double tuck, and a double pike to finish.

Harrold, who fought back from injury so well last year to both help in team finals at worlds as well as to make the bars final, looked a bit rough around the edges this weekend on her best event. She did hit her DTY, and actually had one of her best beam routines to date, but she couldn’t stop a fall on bars and had a few poor landings on floor as well.

She also didn’t get quite the redemption she wanted in event finals, as even though she pulled out bronze medals on bars and beam, she had problems on both that kept her scores a bit low. Harrold did catch her Tkachev to Bhardwaj and nailed her Zuchold, but her form needs a lot of work and she nearly sat her double front dismount, stumbling it back a bit to hold it up, though with her 6.5 difficulty she still managed a 14.175. Her beam routine had a fall, putting her at a 12.625 total, but due to the overwhelming weakness on that event on Sunday, she still managed to get a medal out of it.

Rounding out the top ten were Kelly Simm in sixth with a 53.85, Georgia-Mae Fenton in seventh with a 52.5, Phoebe Turner in eighth with a 52.35, Abigail Solari in ninth with a 50.65, and April Maslen in tenth with a 50.35. Solari, a first-year senior, did a great job to bring home the bronze on vault, where she averaged a 13.512 for her two relatively easy but clean sets. Her Academy teammate Turner also got a bronze of her own, putting up the cleanest floor of the day for a 13.4.

Standouts Becky Downie and Gabby Jupp didn’t compete in the all-around, with Downie on bars and beam and Jupp – still returning from a knee injury – on just bars. Downie had fantastic sets on the first day of competition, posting the high scores of the day on both with her 15.1 for her immense 6.7 bar routine (the most difficult in the world at the moment, I believe!) and a 14.8 on beam. She wasn’t quite as clean as she could’ve been in the bars final, earning a 14.425 for silver, but continued to impress with her brilliant and solid beam performance to earn gold with a 14.75 after nailing her punch front, gorgeous side aerial to layout stepout series, and double pike dismount. The elder Downie is all but a lock for this summer’s team if she keeps this up.

Jupp is also doing great work in her comeback, with a 14.2 on bars in her first day of competition and then an awesome 14.75 to win the title in event finals. Her routine isn’t super difficult compared to Downie, Harrold, or Tunney, but she was so clean, hitting her toe half to Jaeger, Church to pak, and double layout with almost no issues. With her history of unfortunate injuries this quad, she still has a lot to prove if she wants a spot on the team, but she’s doing a great job coming back slow and steady, and don’t forget – she was a surprise last-minute threat for the 2014 worlds team coming back from her last knee injury, so I wouldn’t count her out just yet.

In the junior division, the Welsh gymnast Maisie Methuen won the all-around after a very strong day, earning a 54.6 ahead of Taeja James in second with a 53.85 and Ellesse Oates in third with a 52.85. All three of these were the juniors chosen to represent at Gymnix earlier this year along with Alice Kinsella, who was fourth here after a slightly rough day, earning a 51.7.

Methuen fell under the same “good one day, rough the next” spell that captivated most of the seniors, and didn’t pick up a single event title, with mistakes on bars and beam. She did pick up the silver medals on vault and floor for excellent and clean routines there, however.

Instead, the event titles went to a great mix of young gymnasts, with Sophie Scott winning vault (13.775 average with two super clean sets), Megan Parker winning bars (13.225), Kinsella winning beam (13.3), and Zoe Simmons winning floor (13.5). While none of their juniors are huge standouts on any event at the moment and the highest score was Scott’s 14.175 for her gorgeous Yurchenko full, this is a very promising field with a whole mess of potential stars. There are a bunch of girls, ten or more, with awesome qualities that point to future greatness for Team GB, and it will be fun watching them all improve in the coming years.