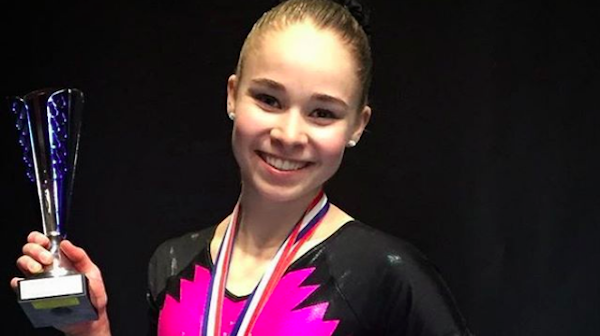 Eythora Thorsdottir got off to a rough start at yesterday’s IAG SportEvent, earning a 12.6 on beam after two big wobbles and a fall.

But the Dutch gymnast known for her beauty and expression shook herself off and went on to win the all-around title, showcasing three upgraded routines, including a creepily fabulous new (and amazingly creepy) floor for a 14.3 as well as a DTY on vault, earning a 15.033 there. The vault upgrade is especially key, as the majority of gymnasts in the Netherlands are competing fulls, which gave the team a disadvantage in team competition. Something like this can add nearly a point to the women’s team total, meaning Thorsdottir is now all but a lock to make the team going to Rio this summer.

Thorsdottir also upgraded bars and debuted her new set there yesterday as well, picking up a 14.533. What I saw was clean, and she most importantly looked confident after her mistakes on beam, showing a clear head for competition which will also be crucial when it comes to making this team. She finished with an all-around score of 56.466, one of the strongest of her career, and one that will only grow when she hits beam.

Her 2015 worlds teammates Mara Titarsolej and Tisha Volleman were second and third with scores of 55.398 and 53.9, respectively. Titarsolej was especially strong everywhere but bars, where an error mid-swing caused her to hit her feet on the ground for a 13.033 there, but otherwise she had calm and steady sets, and could be an asset to the Olympic team on beam and floor. Volleman, who competed at the American Cup this year, typically counts vault and floor as her strengths and that was no different here, with a 14.0 for her FTY and a 13.9 for her carnival-themed floor exercise, though her bars and beam are both quite weak.

Vera Van Pol was fourth with a 53.299, again having issues with consistency. She did upgrade to a Yurchenko 1.5 on vault, earning a 14.233, but she came off on bars after catching her pak (though she still somehow earned a 13.666, which was shocking…there’s no way her hit routine would’ve been a 14.666), had another fall on beam in addition to a hop on her 2.5 dismount, and then hit floor for a 13.066, including a deep landing on her somewhat risky double arabian.

As for the other big names in the competition, Lisa Top competed beam and floor while Sanne Wevers, who won the beam title at the Olympic Test Event, competed just on this event. Top had a hit beam for a 13.466, and while she hit her first two passes – the double arabian and the double front – on floor, she skidded out of her 1.5 to front full, sitting the latter and scoring only a 12.733. With her vault typically one of the strongest and thanks to her big tumbling on floor, Top has been a mainstay on the Dutch team this quad, though unfortunately as the depth in this program has grown, she still has a lot to prove in terms of her consistency if she wants to make it this summer.

Wevers, meanwhile, was excellent, earning a massive 15.5 (6.6 D, 8.9 E) for her clean and near-perfect routine. Her difficulty comes mostly from dance elements, which included her double L turn, a gorgeous and perfectly controlled triple spin, an L turn to opposite direction full pirouette, a double spin, and a split leap to hop full turn. She also looked solid on her flight series, switch to Kochetkova, and stuck gainer layout, proving herself not only as a lock for this summer’s team, but also a very strong contender for Olympic gold on this event.

Several of the country’s top gymnasts sat this meet out despite initially being on the start list, including Lieke Wevers and Noel van Klaveren as well as first-year senior Kirsten Polderman. Celine van Gerner also opted not to compete, and sadly Chantysha Netteb – back this spring after an ACL tear took her down in the vault final at worlds in 2013 – reinjured her knee during warm-ups for floor, a devastating end to a season that was only just beginning.

On the junior side, I was especially impressed with Sanna Veerman, who won the all-around title over Naomi Visser in second and Marieke van Egmond in third. Veerman was the best on all events but floor, showing especially big bars skills for her age (a piked Tkachev, pak, Jaeger, and full-in) as well as a bhs loso loso triple series on beam. She is the biggest junior talent the country has seen in quite some time, and all three of these who made the podium could do a great job to help with the Netherlands’ depth in the future.

Full results are not yet available for this meet, but I will post them as soon as we get them.