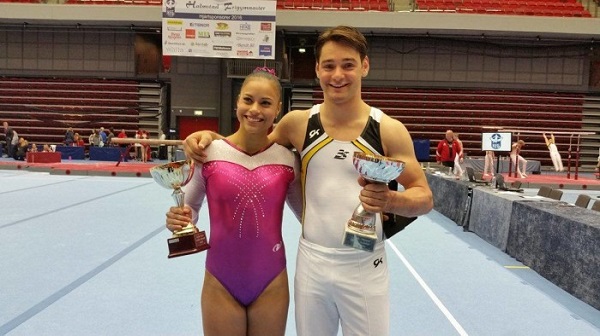 Marcela Torres of All Star Gymnastics in Stockholm defended her national all-around title at the Swedish Championships held over the weekend.

The 27-year-old Argentinian who moved to Sweden four years ago earned a 51.95 in the all-around competition on Saturday to narrowly defeat Ece Ayan of Eskilstuna, who was second with a 51.3. The two had been pretty tight throughout the entirety of the meet, which Torres said made things exciting, though she felt calm and steady coming into the competition. Lovisa Estberg, also of Eskilstuna, won the bronze with a 50.9.

Torres showed especially strong work on vault, earning a 14.3 for her handspring front layout half, and she also had the top bars score of the day for her all-around performance there, competing a bail to toe shoot and a toe-front half dismount with a small hop to get a 12.5 for her clean work.

On beam, Torres earned a 12.45 after falling on her wolf jump to sissone to side somi series, though she got back up and finished strong with a solid layout flight series, a switch leap to layout stepout, and a stuck gainer layout dismount. She finished her day on floor with a 12.7, crashing her double tuck to start but again she came back to finish nicely, nailing her front full to stag and double full.

During Sunday’s event finals, Torres picked up another two gold medals on vault and beam, hitting her handspring front layout half with a hop back for a 14.125 and then reaching a 13.55 on beam. She missed the wolf jump connection into the sissone, but calmly started the series over with a split jump to sissone to side somi, landing the troublesome series incredibly well in addition to hitting her split leap to side aerial, bhs layout, switch to layout stepout, a big switch half, and a gainer layout dismount with a step. She didn’t participate in the floor final, but she managed the silver medal on bars, earning a 12.45 for yet another clean set.

This marks Torres’ final Swedish Championships, as the gymnast is planning on retiring following the European Championships next month. “I want to quit while I’m on top,” she said after her competition. “This year has been tough. My body can’t take it anymore and I feel that enough is enough.”

In addition to placing second in the all-around, 18-year-old Ayan won the bars title with a 12.7 for a nicely hit routine after a few small mistakes in the all-around competition. She also took home the silver medal on beam with a 13.1 and placed fourth on floor with a 12.25, struggling a bit there.

Estberg, 17, had a fall on bars in the all-around that held her back from challenging despite decent scores on her other three events. She fell again on bars in event finals to place fifth with a 10.8 and also fell on beam in finals to place seventh with a 10.65. She came back beautifully on floor, however, winning the title there with a 13.2 to finish her championships on a high note.

Rounding out the top eight all-around were Nicole Wanström of Hammarby in fourth with a 50.2, Saga Svantesson of All Star in fifth with a 47.45, Amanda Björklund of Tölö in sixth with a 45.2, Wilma Sten in seventh with a 43.0, and Lykke Olsson and Tova Jonsson tied in eighth with scores of 40.35. Svantesson won bars bronze with a fall on her pak salto for an 11.95 and then hit floor to get a bronze there as well with a 12.3, while Wanström picked up floor silver with a 12.7 for her tidy routine and Björklund won vault bronze with a 12.525. Hilda Martinsdottir of Atletica was the vault silver medalist with a 12.575.

Julia Rumbutis of All Star, who competes internationally for Georgia and will be at European Championships next month, only did beam and floor this weekend, qualifying in both finals to take the bronze on beam with a 12.1 for her hit set and then finishing fifth on floor with an 11.95.

Cecilia Wrangdahl of All Star was the junior all-around champion with a 48.9, followed by Hammarby gymnasts Nadja Olsson in second with a 47.75 and Agnes Åkerman in third with a 46.7. The top eight also included Lova Thingvall of All Star in fourth with a 46.5, Sigrid Risberg of All Star in fifth with a 46.45, Lilia Meisel of Göteborg in sixth with a 43.2, Maja Sandfridsson of Tidaholms in seventh with a 42.8, and Klara Hagland of Gymnos in eighth with a 39.8.

The top three on vault all competed well and finished within about a tenth of one another, with Thingvall earning gold with a 13.05, Åkerman earning silver with a 12.975, and Wrangdahl earning bronze with a 12.9.

The bars gold medalist was the 12-year-old Tonya Paulsson, who was just named to the national team last month and made her international debut at the Nordic Championships in Iceland shortly after. Paulsson has a knee injury limiting her to just this event at the moment, but she competed beautifully to take the gold with an 11.7, showing strong execution and attention to detail throughout. Wrangdahl finished just behind her with an 11.65 for silver while Risberg won bronze with an 11.55.

Sweden plans on sending only two seniors to European Championships, with Torres going in addition to Emma Larsson, who was exempt from nationals following her successful bid for an Olympic berth at last month’s test event. With hit routines, these two are definitely a step above the rest, with Torres in the mix for making the vault final while Larsson is typically strong on beam and could final there as well. No juniors will represent Sweden in Bern.