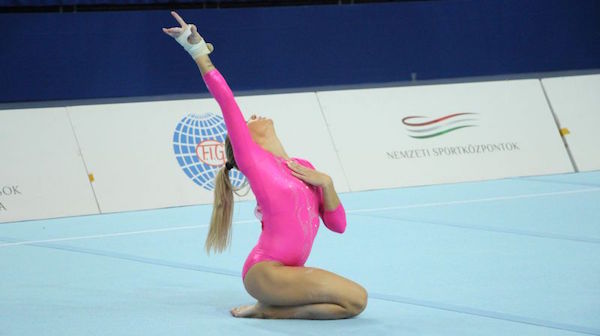 The second day of apparatus finals at the world cup in Szombathely, Hungary finished up with a much cleaner meet for the women alongside a great battle from up-and-coming parallel bar workers for the men.

Though she struggled with falls on beam in qualifications, Emily Little of Australia had a fully hit routine today, earning a 13.3 to share the gold medal with new senior Lyu Jiaqi of China, who looked super elegant and clean in her own work. Veronika Cenkova of the Czech Republic also stepped up with one of the strongest beam routines of her career after a fall in prelims. She came back today with a 13.033 for her super solid work to win the bronze medal ahead of Hungarian favorite Zsofia Kovacs.

Kovacs had a fall on the layout in her flight series, the same mistake that cost her a trip to the all-around final in Rio. She is such a strong gymnast with fantastic difficulty, but these mistakes have been costly for her, especially after having such a strong start to her senior career this year.

“Overall, I’m satisfied with my performance in the world cup,” Kovacs said after the meet. “My routine today was much better than the routine I did in Friday’s qualification. I was also happy with my uneven bars performance, though there is still room for improvement.”

With the fall, she placed fourth with a 12.566, tying Finland’s Maija Leinonen, who had lovely choreography and only one wobble, but much lower difficulty than Kovacs. In sixth was Yana Fedorova of Ukraine, who earned a 12.066 after a fall at the start of her routine, while Luca Diveky of Hungary was seventh with a 11.133 after two falls in her set.

Adela Sajn, the 2008 Olympian from Slovenia, was eighth with an 11.066 after leading in qualifications. Sajn fell on her aerial combo, grabbed the beam as she fell out of a turn, and missed her dismount, making for an unfortunate finish to her weekend here. There was a sliver of happiness, however, as her multiple world cup beam final appearances this year contributed to her becoming overall world cup beam champion for 2016!

Dorina Böczögő got her first world cup floor gold of the year with today’s performance, which earned a 13.233 for a routine that was slightly downgraded from what she did in prelims, taking her third pass to just a full twist to split jump. She had great work on her double layout, however, and came back nicely from a step out-of-bounds on her low double front. In her six world cup appearances this year, Böczögő made the floor final in five of them, including a bronze medal win in Ljubljana, making her the overall world cup floor champion for the year.

“An exhausting three days are behind me,” Böczögő said of her win. “I focused on my routine and I am very pleased to celebrate my success with Hungary.”

We saw another lovely routine from Cenkova, who came back from mistakes in prelims to get the silver medal with a 12.8 here, slightly edging out Dora Kranzelic of Croatia who won the bronze with a 12.766. Fedorova was fourth with a 12.5, Leinonen again showed some underrated beauty in her routine to place fifth with a 12.266, bars champion Xie Yufen of China matched this with a somewhat awkward routine, Anastasiia Bieliaieva of Ukraine was seventh with a 12.166, and China’s Olympic alternate and yesterday’s vault champ Liu Jinru was eighth with an 11.466 after sitting her punch front.

The men’s vault final ended up being a closely-contested match between the top three, with Nguyen Tuan Dat of Vietnam placing first with a 14.899, Tomi Tuuha of Finland placing second with a 14.883, and yesterday’s floor champ Jorge Vega Lopez of Guatemala placing third with a 14.85. Yes, there was less than half a tenth between the top three, making this the most exciting of the events this weekend, with Nguyen’s difficulty on his first vault being the thing that helped him to the gold.

Because everyone else was operating with close to the same exact levels of difficulty, execution was the name of the game. Poland’s Lukasz Borkowski, who led after qualifications due to his great exeuction on Friday, had a rough go today and ended up in seventh with a 13.833 average while Le Thanh Tung of Vietnam, who had the greatest level of difficulty, crashed his second vault and averaged a 14.699 to place fourth.

On parallel bars, the young up-and-coming Dinh Phuong Thanh of Vietnam and Wu Xiaoming of China tied for gold with brilliant routines that totally knocked everyone else out of the water. With matching 6.7 difficulty and 8.8 E scores, these two were on their own level, and it was nice to see equally excellent routines share the top of the podium.

Kenta Chiba of Japan, another young guy with tons of potential, won the p-bars bronze with a 14.833 and then moved on to win gold in the high bar final with a 14.7 for his clean routine there. His teammate Fuya Maeno won the silver with a 14.333, and both Tin Srbic of Croatia and David Vecsernyes of Hungary tied for bronze with scores of 14.3. Vecsernyes didn’t have the best set in front of a home crowd, but got by on his difficulty, whereas Srbic was an opposite story, performing a fantastic routine with difficulty nearly a full point lower than Vecsernyes’ but just so well done, he was able to match the Hungarian.

When all was said and done, China walked away with the most medals, four gold and three silver, even without any of their top competitors. For them, it was all about the younger generations stepping up as they prepare to fight for their own spots in the coming quad as this quad’s gymnasts think about what’s next. Behind China, the host country Hungary also had a hefty medal haul with five, including two golds and three bronze, while Japan had the third-best weekend with one gold, one silver, and two bronze for a total of four.

Full results from this weekend’s competition are available here. Next up on our competition calendar is the Junior Commonwealth Championships, which begin this week in Walvis Bay, Namibia.