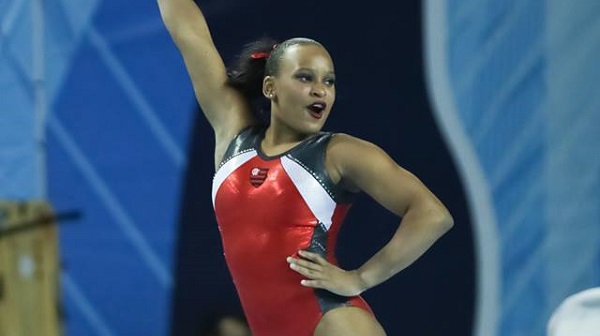 Rebeca Andrade of the Flamengo gymnastics club in Rio is finally seeing everything come together.

Once considered one of the best juniors in the world with Olympic and world medals in her future, 17-year-old Andrade spent the latter part of her junior career sitting out with injury. She came back and made a tentative senior debut, competing in a couple of world cups before getting injured again and sitting out nearly a year, making people wonder if she’d be able to make it to the Olympic Games at all, let alone be the hometown star.

Thankfully, everything worked out. Her coaches put together a comeback plan that brought her back into the sport slowly but surely, not forcing anything too early in an effort to keep her problematic lower extremities intact. Andrade didn’t compete floor until June and she saved the Amanar for when she really needed it, in Rio, where she earned the best all-around score of her career after a near-perfect performance in qualifications, where she finished fourth. Mistakes in all-around finals kept her from the podium, but it was clear the hype around her as a junior was legit.

Now, three months after the Games, Andrade is back and ready to take on the coming quad as one of the best in the world. With most of her Olympic teammates skipping nationals, her win this weekend didn’t come in a knock-down drag-out battle, though I don’t think any of them would’ve been at her level, even with some slightly downgraded work from her.

Andrade managed a domination in the senior field, earning a 58.3 to win the title several points ahead of first-year seniors Carolyne Pedro of CEGIN in second with a 54.75 and Milena Theodoro of Flamengo in third with a 53.7. She nailed her DTY, performed a lovely bars set, showed an almost error-free beam routine (it had to have been her best ever), and capped off the win with a fantastic crowd-pleasing “Single Ladies” floor routine. If what we saw here is any indication of what’s to come from Andrade in the future, she’s going to be a huge international threat, and I can’t wait.

Pedro and Theodoro also showed lots of promise, and given that most Brazilian gymnasts tend to save their best work for when they’re a bit older, I think both will factor highly into the coming years. Pedro had a great day on all events, and while Theodoro had a fall on bars, she otherwise looked great, especially on beam. We also saw some excellent work from Lorena Rocha of CEGIN, another young kid — she’s 17 — with tons of potential. Rocha was fourth with a 53.65, falling on bars and having a rough landing on her FTY, but looking excellent on beam and especially on floor.

For those not competing all four events, five-time Olympian Daniele Hypolito was a standout, performing only on beam, where she earned a 14.4. I assumed Hypolito was just holding out for the chance to represent her country at home, but at 32 she’s still going strong, still with zero plans to retire.

I’m all here for Hypolito sticking around forever, but she’s going to face some super tough competition from kids like Thais Fidelis of CEGIN, who turns senior in 2017 and won the junior all-around title with a 56.9. Fidelis has a killer DTY and a floor routine to die for, getting a 14.85 in her all-around performance with superb tumbling like her 1½ through to stuck double arabian and a whip to triple. She fell on beam in the all-around, but typically has a massive routine there complete with a 6.5 D score, so when she hits that, she’ll be unstoppable and will totally run the show with Andrade next year.

The all-around competition followed up with a team final, pitting club gyms against one another, with Andrade leading Flamengo to the win with a 167.65 while Fidelis helped CEGIN to second place with a 165.85. Both Andrade and Fidelis competed all four events to add second all-around performances into their meet, with Andrade upping her score by a tenth to earn a 58.4 after another day of near-perfection, while Fidelis again had mistakes (a hand slipped on her Jaeger on bars and she sat her double pike dismount on beam) — though was incredible on floor and knocked beam out of the park up until the dismount.

Her beam earned a 14.4 with the dismount fall, which sounds like it’s quite the gift, but the rest really was so good that an E score around a 9.0 wouldn’t have seemed that out of the question. The routine included a perfect bhs loso loso, switch leap to switch half to back tuck, and wolf jump to punch front to sissone, truly awesome combinations performed so fluidly, she certainly has the makings of a future beam queen.

Hypolito performed another brilliant beam in team finals, and Flamengo teammate Maria Cecilia Cruz added a stellar bars routine into the mix as well, while Theodoro competed all four events for a 53.7 and Isabelle Cruz contributed on vault and floor. For CEGIN, Pedro performed everywhere but floor, bringing an excellent bars routine into the mix. Reis showed excellent work on beam and floor, Rocha had some mistakes on bars and floor, and Domingues showed a solid FTY for a 14.1.

Behind the two star teams of Brazil, Pinheiros finished third with a 153.6 and Osasco was fourth with a 151.35.

Event finals saw a combination of juniors and seniors with Andrade again a standout, competing in all finals but vault to win the gold medals on bars and beam as well as the silver on floor, while Fidelis again showed bars as a weakness, finishing fourth, though she came back to get the silver on beam and then won the floor title to finish up her meet on a high note.

The vault title went to Raquel Silva, who averaged a 13.725 in a field that featured mostly juniors, Rocha and Maria Cecilia Cruz went second and third on bars, Pedro won the bronze on beam, and Reis won the floor bronze.

Full results are available here, and check out Ginastica Brasil on YouTube for some videos from the competition.

10 thoughts on “Andrade Sets Up Next Quad with Nationals Win”