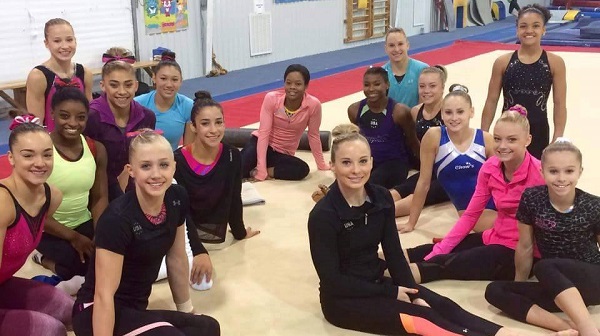 This time last year, we on the gymternet were still abuzz over McKayla Maroney’s interview with GymCastic, mostly because a theme seemed to appear over the course of the discussion: How can we do more to promote healthy attitudes in gymnastics?

When talking about the ranch, Maroney made the specific suggestion that USA Gymnastics hire a nutritionist. My immediate reaction was basically, “Oh…well, duh!” But of course, plenty of seemingly obvious courses of action actually end up being far from the wisest (just think about how we have to go through the whole “No, it’s not just the top X all-arounders at trials who are picked for the Olympic team” discussion every four years), so we need to look into just what impact this could really make.

So, is there legitimate reason to hire a nutritionist at the ranch? The research I’ve done would lead me to say yes, and here are the reasons why.

Let’s start with the obvious one. If nutrition isn’t a problem, why hire a nutritionist for the ranch, right? Well, the information we have from studies among athletes strongly suggests that the vast majority of athletes simply don’t get proper nutrition.

But okay, let’s assume the gymnasts at the ranch are better than these athletes at meeting their basic nutrition needs. The ranch still provides a challenge for adequate energy intake. For athletes especially, nutrition isn’t static, as described in the Academy of Nutrition and Dietetics, Dietitians of Canada, and the American College of Sports Medicine’s position statement. Daily energy requirements vary depending on the intensity and content of the day’s training session.

Even if the U.S. gymnasts are better than other athletes at meeting nutrition goals in everyday training, that doesn’t necessarily translate to when they’re at the ranch each month. We can only be confident gymnasts eat to match their needs at the ranch if a professional who knows how to fill those needs ensures they do.

In the post-Little Girls in Pretty Boxes era, I’m sure you can guess the first health issue I’m going to be talking about. Eating disorders. Does gymnastics deserve the stigma it carries regarding these diseases?

While the benefits of “the international look” seem to be more myth than reality, gymnastics still seems unable to escape the attitudes which lie behind the sentiment. Studies of Norwegian and German athletes have both found athletes in aesthetic sports to be more likely to develop an eating disorder than athletes in other classes of sports.

Now, I’m not going to suggest hiring a nutritionist at the ranch would end any and all problems U.S. gymnasts might have with eating disorders. But I will argue there are specific triggers at the ranch which might be alleviated if a nutritionist directed the gymnasts’ eating habits.

Let’s return to the GymCastic interview. In her discussion of eating at the Ranch, Maroney discussed how coaches’ presence at meals discourages the gymnasts from eating. While she only drew on personal experience, research data supports her anecdotal argument. One Canadian group sought to understand eating disorders within gymnastics by surveying gymnasts, coaches, parents, and judges. Their results found a correlation between gymnasts hearing negative comments about their bodies and gymnasts developing an eating disorder.

Maroney described comments about her weight in her personal recollections, and her understanding certainly seemed to be that this was common among gymnasts from other clubs as well. Combine this with the dining arrangements, and I would argue her recollections suggest the ranch presents a particularly risky environment for disordered eating behaviors to surface. If we put portion size in the hands of a nutritionist, we can hopefully combat this particular trigger.

Now, we all know pretty much every large organization is more likely to make a change for its members’ well-being when that change would also result in increased performance. And when it comes to that, the female athlete triad hits USA Gymnastics where it hurts.

All components of the female athlete triad are associated with musculoskeletal injuries, with improper eating contributing to the injuries which take athletes out of training for the longest. Musculoskeletal injuries are currently a huge issue in gymnastics, and while the U.S. has largely escaped the ACL tear epidemic and the plague of Achilles ruptures is mostly confined to NCAA, the Americans still have their fair share to deal with.

2011 was of course one of the most notable injury years in recent memory with Rebecca Bross dislocating her kneecap at nationals, Mackenzie Caquatto getting injured on her beam dismount at the worlds selection camp, and Alicia Sacramone following that up by rupturing her Achilles during podium training in Tokyo. Maggie Nichols has been hit hard in the last few years, dislocating her kneecap like Bross and tearing her meniscus with less than two years between the injuries. The last two Olympic trials have also suffered casualties to musculoskeletal injuries with Bridget Sloan and Alyssa Baumann both injuring their elbows.

And that’s just some of the major ones.

So really, USA Gymnastics needs to put far more focus on addressing this need. With athletes’ documented inability to eat properly to fulfill their energy needs, logically USA Gymnastics should at least try hiring a nutritionist to combat the injury risk associated with insufficient nutrition.

Of course, the U.S. has enough depth that injuries don’t hinder its potential as much as they do, say, Russia’s. But ultimately, isn’t it preferable that the talent pool loses fewer gymnasts in the first place?

My logic for hiring a nutritionist at the ranch flows this way: The environment at the ranch presents particular obstacles to good nutrition. Athletes in general lack the skills to build a diet to support their activity, and this is compounded at the ranch because athletes can’t eat the same diet in every situation. The ranch also presents challenges beyond just a disruption in eating habits — the factors Maroney highlighted in her interview when she wanted to promote healthy attitudes also lead me to believe the ranch may exacerbate contributing factors to disordered eating. Both manifestations of nutritional deficit could contribute to gymnasts developing female athlete triad disorder, which then contributes to injuries. With such negative impacts from injury, USA Gymnastics should be taking initiative itself to address nutrition, if only from a business standpoint.

Hiring a nutritionist won’t be an immediate miraculous solution to everything. But I do think we have reason enough to believe this plan of action would bring definite benefits.

28 thoughts on “Nutrition at the Ranch: Did Maroney Get It Right?”