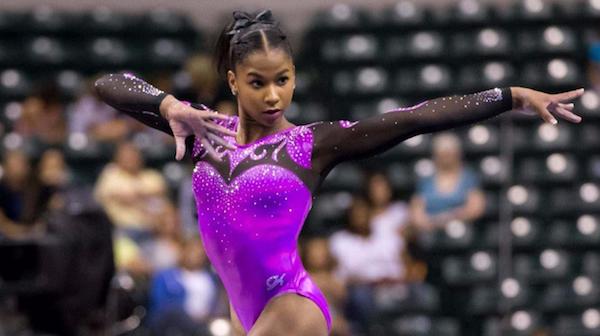 It’s time for the annual American Classic and Hopes Classic at the ranch this weekend, the meets that kick off the summer elite season for the United States each year.

Yesterday, the ranch hosted the final elite qualifier of the year, which saw Sydney Barros, Anapaula Gutierrez, Hannah Hagle, Deiah-Marie Moody, Marissa Oakley, and Deanne Soza reach their optional scores to qualify to the American Classic this weekend and/or the U.S. Classic on July 29 in Hoffman Estates, Ill.

While many gymnasts have already qualified to this year’s U.S. national championships through scores reached at camp verifications and international competitions held earlier this season, many elites must still earn their nationals scores through the two classic meets. Juniors must earn all-around scores of 50.500 while seniors must earn either a 52.000 all-around, a three-event score of 39.750, or a two-event score of 27.000. Those who don’t reach these scores at tomorrow’s American Classic will have a second chance at the U.S. Classic, but these are the only two chances that remain for earning nationals scores.

Several national team gymnasts will compete at the American Classic, including seniors Jordan Chiles, Abby Paulson, and Trinity Thomas, as well as junior Olivia Dunne (I believe all four have already earned their nationals scores, but they’re likely just using this meet to get in some practice before the bigger meets begin). Other notable gymnasts competing this weekend include Elena Arenas, Margzetta Frazier, Shilese Jones, Jaymes Marshall, and Konnor McClain. Former national team member Emily Gaskins was expected to compete in the American Classic, but has withdrawn.

The Hopes athletes, meanwhile, will compete in today’s Hopes Classic meet, where the top 18 athletes in both age groups who achieve the qualification scores (45.0 for age 10-11 and 48.0 for age 12-13) will advance to the Hopes Championships, to be held in conjunction with the U.S. Classic in Hoffman Estates later this month.

30 thoughts on “U.S. Elite Competitions at the Ranch This Weekend”