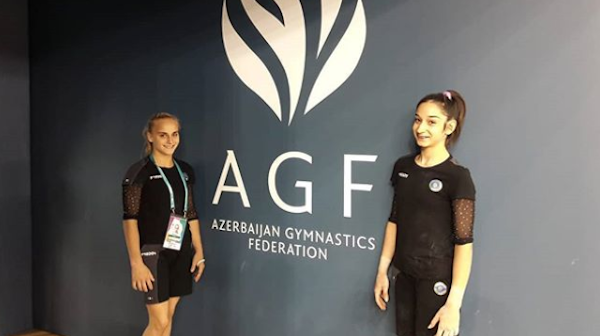 The European juniors will take to the competition floor in Baku, Azerbaijan tomorrow to finalize the list of nations that will compete at this year’s Youth Olympic Games, to be held in Buenos Aires, Argentina, this October.

Earlier this season, gymnasts from Asia, Africa, America, and Oceania qualified via continental championships, but with European Championships not being held until August this year, the European Union opted to host a separate qualifier for those age-eligible (2003-born for the women and 2001-born for the men) to represent their countries at the Games.

A total of 17 quota spots (one per country) are available to European gymnasts in each discipline, and a total of 25 women’s programs and 29 men’s programs are set to compete this weekend in an attempt to qualify. Federations were allowed to bring up to two gymnasts to increase their chances of qualifying, but the spots are non-nominative, so the gymnast who technically “earns” the spot for her country might not end up being the gymnast to compete at the Games later this year.

On the women’s side, two of the most anticipated performances will come from the Italians, with Asia D’Amato and Elisa Iorio going head-to-head. It was interesting to see top all-arounder Giorgia Villa left out of the picture, but both D’Amato and Iorio were super successful at last summer’s European Youth Olympic Festival, and as the spot is non-nominative, they, Villa, and any other 2003-born gymnast would be eligible to represent Italy at the Youth Olympic Games later this year no matter who gets the top score in Baku this weekend.

This season, D’Amato picked up the vault title at Gymnix followed by the silver on bars in Jesolo in addition to consistently landing at the top of the charts at the Serie A meets alongside her Brixia teammates. She’s capable of breaking a 54 in the all-around on a good day, and could very well win this competition in Baku outright, thanks especially to the power she packs in her DTY.

Iorio has faced more struggles this year compared to her teammate, and so I’d leave it up to D’Amato to get the job done to qualify Italy to the Games. Iorio downgraded her DTY to a full this year, and though bars is typically her highest-scoring event, she has struggled with consistency this season, though in recent weeks has looked excellent on the event, and won the title at Jesolo. I really enjoy the work Iorio has been doing on beam this year — her Gymnix performance was a highlight, getting her the silver medal — so while she’s not as dynamite as D’Amato, if D’Amato falters, Iorio will be right behind her to pick up the slack, and the combination of the two gives Italy the best shot at a no-brainer qualification.

Though we haven’t seen her in the all-around yet this year, Ksenia Klimenko of Russia is most likely to win the all-around against the Italians, having defeated them both when we last saw her compete all four events at last summer’s EYOF. Klimenko shared the bars title with Iorio at Jesolo in April, her sole competition of the year until now. She’s coming in a bit rusty compared to the Italians, who have each competed five times since March, and her difficulty on most events isn’t super strong, but she didn’t need difficulty at EYOF last year to take home three gold medals, because when she hits, she’s more than capable of surviving on excellent execution.

The other Russian in Baku will be Daria Belousova, who competed well at Jesolo, standing out on bars and beam, though she’s not quite as polished as Klimenko and she’ll likely sit in the backseat to her teammate here. Fourth at last year’s Russian Junior Championships, Belousova is a capable all-arounder, and will absolutely do well compared to her international competition here, so if for whatever reason Klimenko isn’t able to get at a strong level, Belousova is a great second option.

My other favorites for finishing at the top this weekend are the French girls. Carolann Heduit has a combined all-around difficulty that would put most seniors to shame (she has a 6.2 on bars with everything connected in addition to a DTY on vault, a 5.8 average on beam this season, and a 5.4 on floor), while her teammate and junior national champion Célia Serber is a baby Mélanie De Jesus Dos Santos, fantastic and clean at everything she does.

Heduit is a dynamite, and on a good day could win this meet outright and could probably also be a podium contender at the Games in Buenos Aires. Some consistency issues have plagued her across all four events this season, however, so hopefully she’ll be able to put it all together when it counts.

Serber is my bet for earning the spot, though; she not only looked super strong at nationals, but she also ended up being one of the best juniors at Jesolo, winning bronze in the all-around and on floor while also picking up the gold on vault. She has proven her ability to hit confidently and without errors in even the most nerve-wracking of situations, and if she can do that here, she’ll be a top contender for sure.

From Ukraine, Anastasiia Bachynska is another podium contender with an almost guaranteed spot at the Games. Debuting last year with a knockout sweep at the Stella Zakharova Cup, Bachynska unfortunately ended up just missing out on all four podiums she was a threat for at EYOF last summer, but this season, she’s looked great, especially at Gym Festival Trnava a couple of weeks ago, where she won gold in the all-around and on every event but floor.

We can’t forget about Great Britain here, with English and British national champion Amelie Morgan expected to be the one to watch, though her teammate Phoebe Jakubczyk will be close behind. Morgan is a lovely gymnast to watch, especially on beam and floor, while Jakubczyk is generally powerful and strong on vault and floor, and both should see finishes within this top group in Baku.

I’m excited to see how the Romanians — Ana Maria Puiu and Iulia Berar — fare here; neither has had particularly strong international results this season, but both can be fabulous on beam. I personally also love Anastasiya Alistratava of Belarus, who has the potential to change their women’s program for the better, and I find both of the Hungarians — Bianka Schermann and Csenge Bacskay — super talented and fun to watch. Also keep an eye out for Mari Kanter, who just crushed it at Norway’s junior nationals, and Turkish national champion Nazli Savranbasi, both of whom could do well here with hit performances.

Missing from this meet will be Emelie Petz of Germany, who has been the anticipated one-to-watch for the Youth Olympic Games ever since she won her first national all-around title at 12. A national all-around champion every year since then, with full sweeps in the past two years, Petz is uber-talented and has tremendous potential, and while she won’t be able to qualify the spot this weekend (she’s competing at the European Championships test meet in Germany instead), one of her teammates — Sidney Hayn or Petz’s replacement, Lisa Zimmerman — should be able to get it done for her, though I’d expect Petz will still be the one Germany will send to Buenos Aires in October.

As for the men, the Brits will be looking to clean up here, as both Jake Jarman and Adam Tobin are wildly talented and could easily go one-two on the podium. Jarman is already a standout on vault and floor, winning the British vault title ahead of senior competitors at nationals this year to everyone’s shock, while this year’s all-around national champion Tobin is a steady and competent with potential on every event, though p-bars is a favorite of mine.

I haven’t seen either of the Russians compete this season, though Sergei Naidin was the junior European pommel horse champion in 2016, when he was just 15, also finishing eighth all-around in Bern while helping his team to the silver medal. He should be able to get close to the British boys, and while I haven’t seen much of anything from his teammate, Aleksandr Kartsev, I’d imagine Russia wouldn’t have sent him if he wasn’t capable of anything other than good results.

Ukraine’s Nazar Chepurnyi will also present a challenge to both the Brits and the Russians. He was excellent at the Stella Zakharova Cup this year, dominating the all-around competition by six points while also winning the golds on every event but p-bars, where he earned the silver. His weakest all-around performance this year is stronger than the best from most of the guys on this list, and while pommels and p-bars are generally his best, he’s good absolutely everywhere.

The Hungarians, Krisztian Balazs and Krisztofer Meszaros, are also a really exciting pair compared to the overall field, as are Gabriel Burtanete of Romania, Yumin Abbadini of Italy, Ward Claeys of Belgium, Olegs Ivanovs of Latvia, and Julien Marechal of France, and while Ondrej Kalny of the Czech Republic has some weaknesses overall, he’s fab on vault and floor, and should be more than capable of securing a spot thanks to what should be super strong results there.

A full list of competitors is below. The competition begins tomorrow, June 23, in Baku, with the first subdivision at 10 am, the second at 2 pm, and the third at 5:30 pm (all local time). The competition will stream live thanks to SmartScoring, and we’ll be live blogging the competition from start to finish.