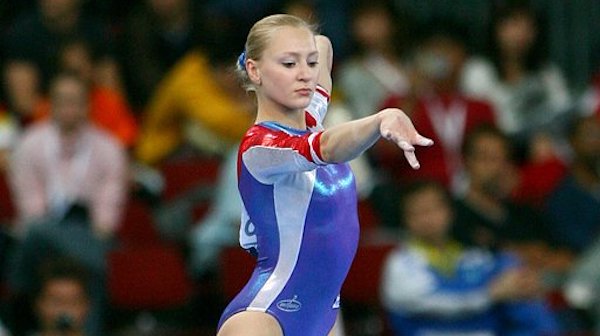 It’s time for the 317th edition of You Asked, The Gymternet Answered!

We apologize if we haven’t gotten to your question yet, but we try to answer in the order in which they were received (unless they are super relevant and need to be answered in a timely manner).

Something you want to know? Ask us anonymously by going through the contact form at the bottom of the page.

Was Yulia Lozhechko really banned from Round Lake? Why?

Yes, Yulia was temporarily banned from Round Lake as a punishment after worlds in 2007. Yulia wanted to make the beam final, so in qualifications, she went for an arabian double front beam dismount instead of her usual double tuck without telling anyone, only to end up falling and just missing the final (she ended up a reserve with the fall). Her coach, Alexander Kiryashov, and the Rodionenkos were pissed, so they kicked her out of the gym.

She was allowed back in December of that year, but she and her coach still didn’t get along, and her coach said it was because she had “mental problems”…aka she was a teenager and a little bit stubborn and didn’t always want to listen to her coaches. She kept competing after that, and was one of eight in serious contention for Beijing, but she was cut following one of the final selection camps in July. Andrei Rodionenko said it didn’t matter how well she did, he didn’t trust her, and he thought she was too much of a wildcard with a personality that clashed with the goals of the team.

Why don’t we see back-to-back tumbling like Dominique Dawes did anymore?

There’s just no place for it in the code. Without any connection bonus as an incentive to do back-to-back connected tumbling lines, gymnasts would basically be doing a whole lot of work for literally zero payoff. Since difficulty is built in other ways now, it wouldn’t make sense for a gymnast to do a connection pass that would take a ton of their energy for no value instead of doing what is valuable now, like F+ skills and difficult combo passes where they can rack up 0.2+ in connections.

Would Shawn Johnson’s layout get credited in the current code?

I think so. I think Shawn had one of the better beam layouts among U.S. gymnasts, for the most part. The key to getting a layout credited is to hit a perfectly straight body at a 45 degree angle (aka that split second when the gymnast is halfway between being fully vertical upside-down and landing), and Shawn was usually able to hold her layout position through 45 degrees before piking down. Sometimes she’d get a slight pike in her hips a little too soon, but never severely enough to get downgraded.

We sometimes hear about repeating routines because of camera flashes in NCAA. Would the blinking crowns in the Utah crowd also be reason for a redo?

I guess a gymnast could say that they distracted her and caused her to fall if she caught a flash of light just the right way (like if it bounces off of a reflective surface and blinds her for a second)…but I feel like because that is a constant, nonstop blinking, your eyes tend to adjust to it and it’s not super distracting or you tune it out, unlike a one-time camera flash, which can completely take someone out of her element and cause her to have a mistake. I’m sure they could at least try to fight for a second chance by blaming the crowns, but I don’t know how seriously the judges would take it.

Thinking about current elites, who is someone you think is likely to have Chusovitina-esque career longevity?

I feel like Simone Biles and MyKayla Skinner have the physical traits that would allow them to compete forever, but I don’t think either really wants to do that, sadly. If it does happen again and we get another gymnast competing into her 40s, it’ll probably be a gymnast from a smaller program who doesn’t have a lot of domestic competition so she can downgrade some of her routines as she gets older and still have a chance at leading teams and earning Olympic spots.

Chusovitina still made teams for Germany in her 30s, but I don’t think that would have been the case in 2016 since Germany had such a deep program that year, so it was good timing for her to switch her FIG nationality to Uzbekistan, and now with no one else really rising up in that country to challenge her, she basically will be able to compete wherever and whenever she wants, for as long as she wants. She can go to worlds in a team year and just do one or two events and not have to worry about a team’s goals, only her own, and then she can bring her all-around program back when she needs it to qualify for the Olympics. It’s ideal for her, and for Uzbekistan, at least for now.

If I had to pick someone, probably Marta Pihan-Kulesza? She’s already 33 and made a successful comeback after having a kid, she has the right physicality for longevity (meaning that she’s built in a way where her bones don’t snap every time she lands), she clearly LOVES the sport and continues to have fun with performing and competing for herself, not just because she wants the Olympics and only the Olympics…as long as Poland doesn’t try to screw her over too much, she’s in a really good place to be around for a very long time.

I’d also go with Filipa Martins, just because I think she’s at a place in Portugal where she’s so untouchable, she essentially runs that program. I’m sure they’d love for her to stick around forever, honestly.

Why is Israel so strong at rhythmic but not at artistic?

Soviet immigrants brought rhythmic gymnastics to Israel in the early 70s, and just as much as the current Russian program stems from the former Soviet, so does Israel’s current program, where for a very long time (like, up until less than a decade ago) the majority of coaches and athletes were Russian immigrants, or the children of Russian immigrants. Since most of Israel’s coaches to this day are products of the Soviet system, either in that they came from Russia or learned directly under Soviet coaches, the training is similarly strict, demanding, and often abusive. In 2016, gymnasts on the Olympic team reported national team coach Ira Vigdorchik (essentially the Irina Viner of Israel) for being physically and emotionally abusive, and she was eventually ousted from her role, but this was common behavior within the rhythmic program, stemming from that intense Soviet ideal that put medals above anything else. For a long time, Israelis – who are a bit more relaxed in their own sports culture – were turned off by a lot of this behavior.

So the Israeli rhythmic program was largely Russian for many years, but many young, Israeli-born kids saw the success and beauty of the rhythmic gymnasts and wanted to get involved, so the program began growing at the developmental level with local athletes. In recent years, we’ve seen more and more homegrown gymnasts and coaches kind of start to take over the reins, but with the Soviets putting the building blocks of the program in place decades ago and continuing their training methods up until the current generation, Israel was able to get a head start that made them one of the top teams in the world to this day.

This is NOT true for the artistic program, however, where the first generation of gymnasts who competed at the Olympic Games in 1960 were all born in Palestinian cities (like Jerusalem and Haifa, which would become Israeli cities after 1948). Actually, when Israel made its second artistic gymnastics appearance at the Games in 1984, one athlete was from the U.S. and a member of Stanford’s gymnastics team at the time. But most were Israeli born and bred, and came up through the Israeli sports system with Israeli coaches who didn’t have the benefit of learning directly from an already established program. They just didn’t have that same foundation that the rhythmic program had, and it’s been more difficult for them to build from the ground up.

In 2021 what competitions will gymnasts be able to get skills named after them? Will it just be the Olympics, or are there others as well?

Any FIG competition listed under Article 2 in the FIG’s Technical Regulations is eligible for naming skills, which for artistic gymnastics includes world championships, the world cups (all-around and apparatus), and all continental championships. Since there will be both the Olympics and worlds in 2021, plus several world cups and continental meets, there are a ton of opportunities for gymnasts to get skills named next year.

Can junior elites get skills named for them?

What makes a whip different from a layout?

A whip goes low and long, and is essentially a no-handed back handspring that is used in routines to help generate momentum into a subsequent skill, just like a back handspring. You would never see a gymnast do a whip on its own as a tumbling pass. A layout, meanwhile, gets more lift and doesn’t really travel, and it’s usually used as its own skill (or, in more advanced routines, it’s a building block for a more difficult skill, or used in combination with a series of skills).

Trinity Thomas has already competed the Biles, at nationals last year! And several others have trained it. I think if anything, Simone would be flattered to see other gymnasts attempting “her” skills, and I don’t think any gymnast or coach would refrain from seriously considering certain skills just because they “belong” to another still-competing athlete.

Have a question? Ask below! Remember that the form directly below this line is for questions; to comment, keep scrolling to the bottom of the page. We do not answer questions about team predictions nor questions that ask “what do you think of [insert gymnast here]?”

6 thoughts on “You Asked, The Gymternet Answered”