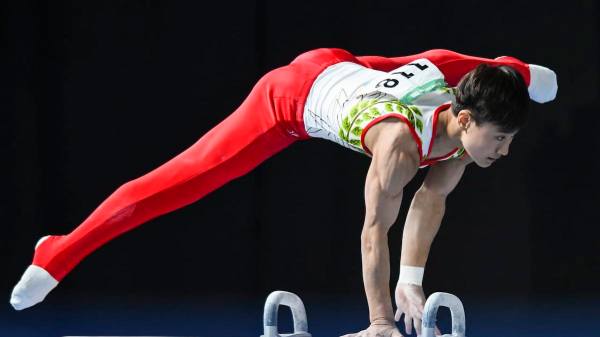 Three-time world medalist and 2016 Olympian Murakami Mai showed up at the All-Japan Championships ready to secure her Tokyo berth, leading the women’s competition with a 56.266, more than a point ahead of the rest of the field.

Murakami, 24, finished in the top three on all four events, and posted the best scores of the session on vault (14.7) and floor (14.2) on her path to taking the lead after the first day. After missing out on making the world championships team in 2019 due to an injury and then enduring a hiatus due to the COVID-19 pandemic last year, Murakami won the All-Japan national title at the end of 2020, and she’s looking likely to make it happen again tomorrow as well.

Just behind Murakami in the all-around qualification rankings were two-time world championships competitor Hatakeda Hitomi in second with a 55.099 and veteran Hiraiwa Yuna in third with a 54.132. Hatakeda, last year’s silver all-around medalist at nationals, had the top bars score with a 14.333, and she also proved solid on beam and floor, while Hiraiwa hit all four events with no problems, which is promising as she goes into her Olympic campaign as a bit of a last-minute surprise after coming back onto the scene last autumn.

Two-time Olympian Teramoto Asuka was fourth with a 53.998, and newcomer Soma Ui, who was third at nationals last year, was right on her heels in fifth with a 53.932. Teramoto seems to be nearly back to her old self after finishing 13th at nationals last year, which took place just 10 months after she tore her Achilles. She performed her Rudi on vault in qualifications, and also had strong scores on bars with a 13.566 and on beam, where her score of 13.633 was second-best in the competition. Soma, meanwhile, earned a 14.5 for one of the best Yurchenko doubles in the competition, and she was clean and solid elsewhere, showing that she could very well sneak into the Tokyo picture this summer.

Rounding out the top 10 were Hatakeda Chiaki in sixth with a 53.565, looking a little weak on bars, but making up for it with a great Yurchenko double and a floor routine that scored a 13.433, third-best in the competition; Sugihara Aiko in seventh with a 53.432, including a second-best vault score of 14.666 for her Yurchenko double as well as top-six beam and floor scores; 2018 Youth Olympic Games competitor Yamada Chiharu in eighth with a 52.966; first-year senior Okamura Mana in ninth with a 52.599, which included the fourth-best beam score of 13.4; and Matsuda Towa in 10th after struggling on beam, though she hit great routines on vault (14.333) and bars (13.566).

2016 Olympian Miyakawa Sae, who has notably struggled in recent years related to changes in her coaching situation after her previous coach was found to be abusive, looked back in pretty great form here, putting up a 14.333 on vault and a 13.633 on floor, which was the second best in qualifications and matched Murakami’s 5.9 D score. This will be her first year qualifying to the All-Japan all-around final since 2018, which is incredible improvement, and her score of 52.132 was good enough for 11th place.

If the women’s competition was a tough one, the men’s is possibly even tighter. Five-time Youth Olympic Games champion and three-time junior world champion Kitazono Takeru, who is just 18 years old and entering his first full season as a senior competitor after finishing second at nationals last December, topped all-around qualifications with an 87.332, including top-ten finishes on floor, pommels, p-bars, and high bar, an incredible achievement for any MAG athlete in Japan, let alone someone his age.

Just behind him was another young competitor, Miwa Teppei, who was second with an 86.598, a big change from the ninth-place spot he found himself in at last year’s competition. The 20-year-old had his best performances on vault, where he earned a 14.8, and on p-bars, where he qualified third with a 15.033, though he was clean and solid on all six events. Given his lack of experience, he’ll need to prove that he can repeat what he did on Friday, but he looks fantastic and it would be great to see him slip into the Tokyo picture.

Five-time world medalist and last year’s national champion Kaya Kazuma was third with an 86.298, and most importantly, he put up a 14.766 on pommels, the fifth-best at this meet on an event that has sometimes been a struggle for teams of mostly all-arounders at worlds. He also hit the other five events for a 14.1 or better on all, and has room for improvement, as well as room to jump up in the standings, especially as he’s currently only just about a point back from the lead as it stands.

The women’s all-around final continues on Saturday, April 17, at 2:40 pm local time, while the men’s final will be held on Sunday, April 18, at 12:00 pm. Both will be broadcast live on the NHK network.