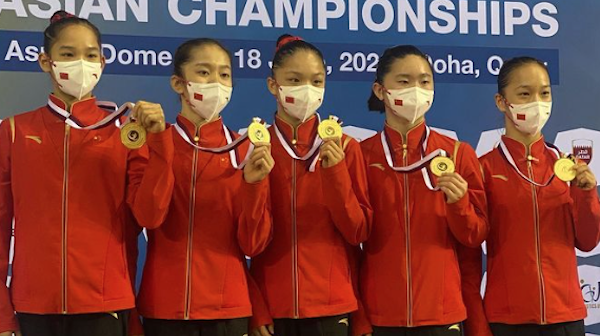 China had great success in the first half of competition at this year’s Asian Championships in Doha, Qatar, where both the women’s and men’s programs won the all-around and team gold, and also secured team berths to world championships in Liverpool later this year.

China came into the second day of competition over three points ahead of the rest of the field, and extended that lead to nearly 10 points ahead of South Korea after competing on beam and floor on the final day, putting up a total of 167.366. The team’s performance on beam was nearly as impressive as its domination on bars, with their 42.933 nearly four points ahead of the next-best team, and they also had a significant advantage on floor, where the team had some of its best individual scores in recent history.

The all-around title ended up going to Zhang Jin with a 55.400. Zhang was third after day one, but with the team’s second-strongest performances on both beam (14.2) and floor (13.7), it allowed her to propel past teammate Tang Xijing, who looks like she may have struggled on beam, earning just a 12.967 there. Tang was still able to pick up the silver all-around medal with a 53.967, though she did miss out on making the beam final with the team’s weakest performance on that event.

Wei Xiaoyuan led the all-around after the first day of competition, but she ended up competing only those first two events while Wu Ran and Sun Xinyi handled beam and floor. Wu topped the field on both events with a 14.633 on beam and a 13.833 on floor, while Sun finished third on beam with a 14.1, missing the final by a tenth due to the two-per-country rule, and she was seventh on floor with a 13.0, also missing that final. With Zhang doing so much over the first two days of competition, I wouldn’t be surprised to see them swap Sun into her place on beam to get her more experience.

I was incredibly impressed to see the Korean women hold onto second place ahead of Japan. The teams came into the second day of competition pretty evenly matched, but while Japan was able to pick up nearly a point on beam, the team had a massive setback on floor, where they earned just a 35.866 to South Korea’s 39.301, and the Korean women ended up taking the silver with a 157.566 over Japan’s 154.867.

Lee Yunseo ended up taking the bronze all-around medal with a 53.633, building on an already strong first day with excellent performances on beam (13.133) and floor (13.367) to qualify into both finals. The team also saw Yeo Seojeong in fifth with a 52.133 and Shin Solyi in sixth (though two-per-country’ed out of the official rankings) with a 52.100, with Yeo making the floor final with a 13.167 while Shin qualified on beam with a 12.833.

The team also had Lee Dayeong back today on floor, where she was ninth with a 12.767, and 2016 Olympian Lee Eunju made an appearance on beam, though she unfortunately had a fall, finishing 20th with an 11.567.

Japan surprised me by putting up some excellent beam routines but then losing steam on floor, the opposite of what I expected from them. Miyata Shoko was strong on both, getting into both finals with scores of 12.9 and 13.633, respectively, in addition to finishing fourth all-around with a 53.033.

Yamada Chiharu finished sixth all-around with a 51.233, ending up a bit weak on both events after looking great on day one, while Kasahara Arisa ended up just behind her with a 50.267, stunning on beam with a 13.8 to make the final, but then dropping the momentum on floor, where she had just a 10.0.

The team also put up Watanabe Hazuki on beam, earning a 12.467, and Matsuda Touwa on floor, earning just a 9.9, which forced the team to count Yamada’s equally low score.

With all of this said, the most exciting part of the meet was seeing Taiwan perform so consistently across both days of competition. The team comes in at lower difficulty than any of the top three, but everyone killed it, and I especially loved seeing the breakthrough performance from Lai Pin-Ju. A veteran at 20, Lai was fantastic on both days of competition, earning a personal best 50.000 all-around score to finish seventh, and qualifying into three finals, including vault on day one, and then beam (12.633) and floor (12.6) on day two.

Lai really stepped it up here, but both Mai Liu Hsiang-Han and Ting Hua-Tien were also wonderful, earning scores of 49.300 and 48.967, respectively. Mai Liu ended up eighth in the all-around, while Ting was two-per-country’ed out of the official rankings, and though neither made finals on the second day of competition, Mai Liu got very close on beam with a 12.533, while Ting was also pretty close on floor, with a 12.467. I was hoping Ting would be a standout on beam, but she ended up earning just an 11.8 there with a 4.2 start value awarded.

The baby of the team at 17, Huang Tzu-Hsing wasn’t quite at the same level as her teammates, but she still showed some promise, which is great in a country where gymnasts tend to peak as they age. She finished with a 46.566 in the all-around, and had scores of 11.067 on beam and 11.533 on floor, falling on the former, but her difficulty level was impressive there and I’m hoping some more experience will keep her moving forward.

The top all-arounder outside of the top four teams was veteran Aida Bauyrzhanova of Kazakhstan in ninth with a 48.834, earning the first of eight individual worlds berths. She had strong work on both beam and floor, and secured the final spot into the beam final with a 12.567.

Irfanaluthfi and Aripova also both qualified into the floor final with scores of 12.667 and 12.567.

I expected to see both Kazakhstan and Uzbekistan qualify two gymnasts apiece to worlds, and also expected to see Irfanaluthfi, Gehani, and Nathan make it, so it was really just that final spot that was shaping up to be a surprise.

I figured one of the gymnasts from India would lock it down – either Pranati Das, who led after the first day of competition, 2020 Olympian Pranati Nayak, or Illinois gymnast Ruthuja Nataraj – but while Nataraj came closest with a 42.534, she ended up narrowly behind several other competitors, with Mueangphuan sealing the spot by just a tenth ahead of Indonesia’s Ameera Hariadi.

India will not have an all-around competitor in the women’s field at worlds this year, but Protistha Samanta is currently ranked fourth while Nayak is 12th in the world cup vault standings, so they should have two competitors representing the country in Liverpool (the top eight per event qualify via the world cups, but while Nayak is 12th, there are enough gymnasts ahead of her who are part of countries that have qualified or will qualify teams or all-arounders, so she should be safe).

As for Hong Kong, Angel Wong Hiu Ying finished 18th with a 42.799 to come within just under a point of making it. But Wong is currently ranked 11th in the world cup beam standings, and again, with so many ahead of her who will qualify via other means, she should also be safe.

The currently active Asian nations that will miss out on representation at worlds are Mongolia (they had two gymnasts competing today, but they both competed only beam and floor and not in the all-around, leaving them out of contention), the Philippines (despite winning team gold on top of other successes at the Southeast Asian Games the program opted to not send any women to this event), Malaysia (the program has no team depth right now, but the decision is still puzzling, as Rachel Yeoh Li Wen won the all-around bronze at the Southeast Asian Games), North Korea (the country is still locking down due to the COVID-19 pandemic), and Vietnam (apparently, and unfortunately, the program wasn’t aware that they had to attend this competition to qualify for worlds, and they also haven’t sent any women to world cups this year).