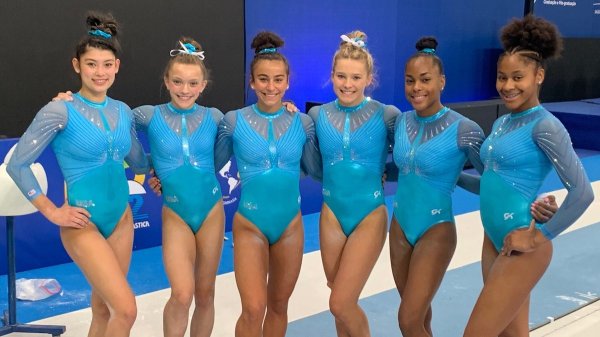 The 2022 Pan American Championships start tomorrow in Rio de Janeiro, Brazil, and with the continental meet serving as a qualifier for world championships this year, it’s going to be a more important competition than usual for the seniors trying to earn berths as part of teams or individually.

Below, you can find everything you’ll need to follow the competition over the next few days, including who’s competing, how qualifications for worlds work, and how you can watch.

As a qualifier for world championships, the biggest thing on the line this year for the seniors – perhaps even more important than medals for many – will be earning the chance to compete in Liverpool.

Both the team and all-around places will be determined on the first day of competition, and for individual qualifications, there’s a max of two gymnasts per country without a team qualified.

Of course, worlds aside, the medal fight will also be very exciting. For seniors, the first day of competition will determine the all-around and apparatus champions, while a separate team final will determine that podium, and for the juniors, the first day of competition acts as the all-around and team final, while apparatus finals will be held separately.

The women’s field is headlined by 2020 Olympic champion Rebeca Andrade, who will compete every event but floor in her return to international competition after winning medals on vault and bars at worlds last year. The host country will also feature Olympians Flavia Saraiva and Lorrane Oliveira, who is replacing an injured Jade Barbosa.

For the United States, 2021 world medalist Kayla DiCello is back to lead the team, made up of several 2005-born up-and-comers, including Skye Blakely, who won the selection meet with a 55.250 and should be a top contender for the all-around title. Among the other teams in strong contention for world championships, Canada has several Olympians in the mix, including Shallon Olsen, Ava Stewart, and Rose Woo, while 2020 Olympian Abigail Magistrati will lead the team from Argentina, veteran Ginna Escobar will take charge for Colombia, and for Mexico, we’ll see this year’s national champion Ahtziri Sandoval at the helm, back in a major international competition for the first time in four years.

Speaking of comebacks, former British junior standout Tyesha Mattis is back after a five-year hiatus, representing Jamaica alongside sister China. It’ll be interesting to see how she looks and whether she’ll be able to earn one of the all-around spots for worlds, though the competition will be tough there – my favorites to keep an eye on are Hillary Heron of Panama, Ana Karina Mendez of Peru, and Alais Perea of Ecuador. As a New Yorker, I’m also excited to see two Tri-State athletes repping international programs, including Annalise Newman-Achee of Arena Gymnastics for Trinidad & Tobago and Olivia Kelly of North Stars for Barbados. Both have previously qualified to the elite level in the U.S., and could have the scoring potential to move forward.

The U.S. men’s program sent a top-notch team to this event, led by Olympians Brody Malone, Yul Moldauer, and Shane Wiskus, but they’ll be facing off against a tough Brazilian squad, which is a veritable “who’s who” of top competitors, including most of last year’s Olympians – Arthur Mariano, Diogo Soares, Caio Souza, and Arthur Zanetti – on the roster.

I think Colombia, Argentina, Canada, and Mexico are likely to be the other top teams in contention for a worlds berth, and on the individual level, Israel Chiriboga of Ecuador, Audrys Nin Reyes of the Dominican Republic, and Edward Gonzalez of Peru should all be in the mix, though there are quite a few competitors – especially from Cuba – who are coming into this competition essentially as unknowns and it’ll be exciting to see how they shake things up.

Junior athletes will also compete here, with the U.S. teams strong for both WAG and MAG. I also love Argentina’s junior women’s team, which was super successful at the South American Junior Games earlier this season, and Brazil should also be a podium contender. For the men, Colombia and Brazil will be must-watch teams.

The full rosters for each division are below.

Here’s the complete schedule, along with a breakdown of who’s in each subdivision. All times are local to Rio de Janeiro, which is one hour ahead of ET.

Below is a breakdown of all of the mixed groups for each division.

How Can We Watch?

You should be able to catch live streams from each session on the Pan American Gymnastics Union’s YouTube channel, and the senior competition will also be available on the PanAm Sports Channel. For juniors, the stream will be hosted on the Brazilian federation’s YouTube.

Additionally, the WAG athlete rep Jessica Lopez will be streaming part of the competition on her Instagram, focusing on gymnasts not shown in the broadcast.

6 thoughts on “Everything You Need to Follow Pan Ams”