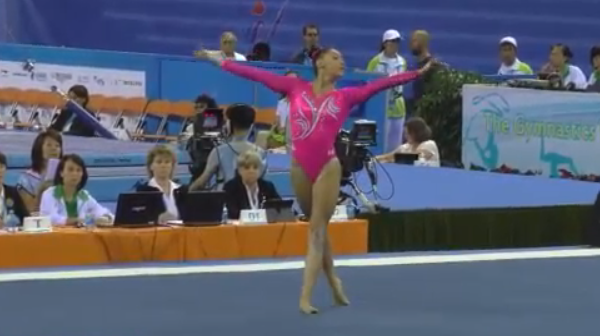 It wasn’t a perfect day for Team USA, but even with counting a couple of mistakes, they earned a domineering 235.038 qualification score.

Beam was a decent event for the U.S. women, even if nerves did give way to somewhat shaky routines and lower scores than they’re used to. MyKayla Skinner kicked things off, looking more nervous than I’ve ever seen her, and she finished her routine probably a full ten seconds before she normally might, she moved so quickly through her skills (so quickly, in fact, I thought there was something wrong with my video).

There were some rough parts – i.e. her switch half to back tuck where she barely made the leap and then had a large wobble – but considering her nerves, she still finished well. Her bhs tuck full had a small check and she hit her double tuck dismount with a small hop, earning a 13.533 with a 5.4 start value awarded.

Up next was Madison Kocian, who nailed her standing arabian to start. Her switch ring was lovely, as were her front aerial to sheep jump, bhs loso, side aerial (with a small check), full turn, switch to sissone, and double pike with a controlled lunge back. It wasn’t the cleanest it could have been, but considering she usually has a problem wtih at least one skill, it was the most controlled routine she’s had, and brought in a 13.9 (5.7). They tried to fight to get her start value raised, but were unsuccessful.

Alyssa Baumann had a large error on her standing arabian landing, but then seemed to calm down and hit her switch ring and bhs loso with zero problems. There was a slight pause between her Onodi and sheep jump and a check on her side aerial, and she hit her 2.5 with a hop forward. She’ll definitely need to fix a lot for finals, but it mostly looked like mistakes from nerves, nothing more. 6.0/14.066

Beginning her routine with a nailed wolf 2.5, Simone Biles had a mostly flawless routine, aside from a small check on her bhs-loso-loso series. She hit her front aerial to split jump, side aerial, switch to switch half to back pike, and punch front with almost zero error, and then took just a small step on her full-in dismount, earning a 15.133 (6.4).

Execution-wise, Kyla Ross was definitely best in the pack, hitting an absolutely gorgeous routine where a small check on her switch leap and a tiny step on the double back were literally her only issues. Her punch front to wolf, front aerial to sheep, bhs loso, switch ring, side somi, and side aerial were lovely, though her score of 14.391 was less than what she’d normally hope for, due to a missed connection.

The U.S. team continued their skilled performances on floor where Kocian was the lead-off, opening with a powerful full-in rebounded back and then nailing her double pike. Her 1.5 to front full looked clean, and she finished with a double tuck…a very polished routine considering she hasn’t competed on the event since injuring her ankle at nationals over a year ago! She earned a 13.633 with a 5.4 difficulty score for her easy, but lovely, routine.

Up next was Baumann, who stuck her double layout in the opening pass…a little deep in the knees, but looked great in the air, as did her stuck double tuck. She hit her triple, albeit with some Mustafina-esque twisting form, but her double pike was great, with just a small hop back. She was also mostly precise with her dance elements, and earned a 14.0 (5.7).

Ross began her routine with a nice double arabian to stag and a double pike with a tiny rebound back. Her dance elements looked lovely, she had a stronger performance value than she’s had in the past, and she finished with a lovely 1.5 to front full and double tuck, earning a 13.8 (5.4).

The much-anticipated Skinner routine began with her best double double layout to date, looking so much more stretched than usual and with a very nice landing. She also hit her double double tuck with zero problems and actually had a strong leap or two. She took a step back on her full-in, and she landed her 1.5 to 2.5 with a step to the side. A very solid effort, and both she and Aimee Boorman walked away from the podium with smiles; her effort brought in a nice 14.7, with a 6.4 difficulty score (a bit lower than planned, as she didn’t do her double wolf turn I believe).

Biles opened with a powerful double double and absolutely nailed her eponymous skill, the double layout half-out. She hit another strong double layout, and again killed her full-in, getting huge applause even from the table full of what looked like event staff. As if she’d do it any other way! That routine will absolutely bring the house down in event finals, and earned a 15.366 (6.5).

Kocian got things started on vault with an FTY, looking incredibly clean but rebounded back quite a bit, earning a 14.133 (5.0). Baumann then showed a super clean stuck DTY; she came off the table a little to her right, but it was an extremely solid effort for a 15.033 (5.8). Ross then hit an equally clean and stuck DTY for a 15.1 (5.8).

Skinner’s first vault was her Cheng, which was as clean and nicely-landed as usual, though again, her lack of height was evident. Still, she brought in a HUGE 15.666 (6.4), her best score to date, I believe! Her DTY was also very clean, and just hopped back slightly on the landing, earning a 15.033 (5.8) for a combined total of 15.349.

Biles’ Amanar was super powerful (getting a “WOAHHH” from the crowd!) but not very controlled on the landing; still, she earned a 15.8 (6.3), a huge nod to her power as well as how clean she was in the air. Her Lopez was also very strong, with just a rebound back, and she brought in a 15.1 for a 15.45 total.

Despite their incredible improvements on bars, the U.S. team had their biggest mistakes here. Skinner was the lead-off with one of her better attempts, however. She had form issues with her legs on the van Leeuwen and bent elbows on handstands at the start, but hit a nice toe full to huge Tkatchev, Ray, super clean bail, and full-in dismount for a 13.9 (5.7). An awesome score for her, and she’s shown tremendous consistency on the event – and overall – not having a single fall since Classics, making her the most consistent U.S. gymnast.

Biles hit her Weiler half to Maloney but then lost herself in a handstand, I believe in what was supposed to be a full pirouette. She had to regroup and take an extra swing, but didn’t come off and finished well with a toe full to Tkatchev to pak salto, toe shoot, and a hit dismount, though she brought in just a 13.3 (5.7).

Next in line was Ross, with a gorgeous effort, including a Maloney to lovely pak salto, van Leeuwen, toe half to straddle Jaeger, toe full, bail, toe shoot, and stuck double layout, earning a 14.65 (5.9).

Kocian unfortunately had a problem similar to Biles, which was a shame as it was the first mistake she’s made on bars all year and kept her out of the event final. She hit her Maloney, gorgeous pak salto, and Chow half but caught the Chow half with bent elbows, causing her to lose her momentum and break the flow of her routine. She caught her Jaeger and stuck her full-in, still managing a 14.3 despite the dramatics.

Finishing things up was Ashton Locklear, who earned a 15.233 after hitting her insane connections (inbar full to Komova II to pak salto to Maloney to bail to Ray), all linked fluidly and beautifully. Her inbar half to straddle Jaeger was no problem, and she hit her full-out with a step back.

They have a huge advantage over the top teams in Nanning, because while Russia and China both have a couple standout rotations each, the U.S. doesn’t have a bad rotation at all. Even with rougher than usual rotations today, their lowest score was a 57.490 on beam.

Like a lot of teams at this year’s Worlds, they’re very inexperienced which leads to nervous performances, so they will need to overcome this in order to produce a solid three-up, three-count final. But honestly, even there they don’t even have a ton of work to do. The team title is theirs to lose.