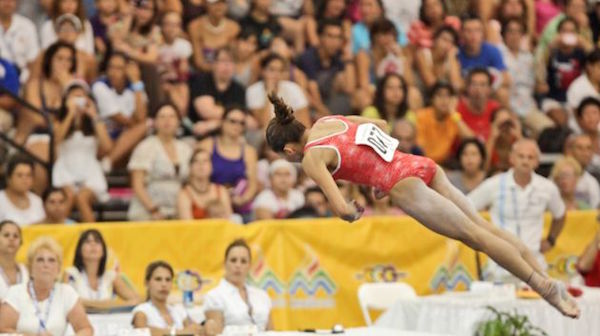 The 22nd Central American and Caribbean Games are currently underway in Veracruz, Mexico. A multi-sport event featuring 44 sports in addition to artistic gymnastics, the Games showcase athletes from 32 countries, with host country Mexico expected to dominate.

Women’s artistic gymnastics was represented by four full teams in addition to eleven gymnasts from another seven countries. Nearly all competitors were in attendance at this year’s World Championships and/or Pan American Championships, making it an incredibly deep field with lots of top talent.

The first two days of WAG competition acted as the team and all-around final in addition to the qualification for event finals, which will be held November 20-21. Due to a shortage of judges, gymnasts competed on vault and bars on November 18 and then finished things up on beam and floor earlier today.

As expected, Mexico came out victorious in the team final, though it wasn’t an easy task. The Cuban silver medalists finished less than four tenths behind the home squad, an unprecedented result considering their relative lack of experience on the international stage. The team from Colombia earned bronze.

The all-around was a battle between gold medalist Jessica Lopez of Venezuela, silver medalist Elsa Garcia of Mexico, and bronze medalist Yesenia Ferrera of Cuba. Garcia led by about half a point after the first day of competition, though Lopez sealed the deal for her win today with an expertly-performed beam routine. Ferrera hit excellent vaults on day one and showed an awesome, engaging floor routine this afternoon, but her unfortunate bars fall left her a bit behind her competitors.

Still, coming out with an all-around bronze is nothing to frown at, and with the top qualification spots on both vault and floor, she could finish as one of the most decorated gymnasts in attendance. Ferrera also qualified fourth into the beam final, where Lopez currently sits in first, and Garcia leads bars qualifications ahead of Lopez by just a tenth. Lopez will also compete in the bars and floor finals, while Garcia has secured a top five spot in every event final.

Also of note, Yamilet Peña missed out on the vault final by just one spot after a rough landing on her DTY, a shame after winning the gold on this event in Medellin two weeks ago. The Dominican gymnast had issues throughout her entire competition and unfortunately didn’t qualify to any event finals in Veracruz.