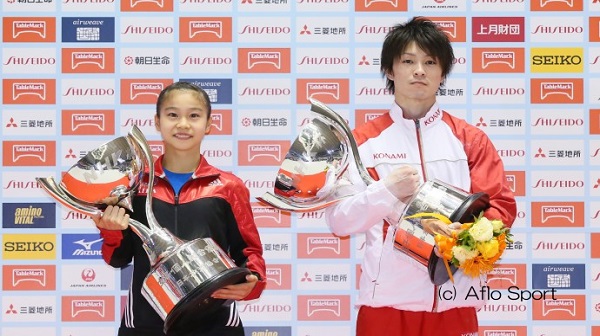 Aiko Sugihara, the 15-year-old competing in her first year as a senior, won the NHK Trophy in Tokyo over the weekend, defeating national champion Asuka Teramoto and two-time defending champion Natsumi Sasada.

These three along with Yuki Uchiyama and Sakura Yumoto have earned spots to compete at this year’s World Championships in Glasgow, Scotland this October. The sixth and final spot will likely be a specialist, to be determined later this spring, though Sae Miyakawa with her finals-worthy vault and floor is likely to be named.

The competition counted all-around scores both from the NHK Trophy itself as well as the all-around final score from all-around championships held last month. This two-score total determined the champions here, though either way, Sugihara would have won as her 57.250 all-around score this weekend was the highest by over a point.

Sugihara has the distinction of being the only gymnast to hit all four events with a score above a 14.0. She began her performance with a Yurchenko 1.5, taking a couple of steps forward but getting some nice height. Moving to bars, she had some nice stalder and inbar work in addition to her Jaeger, earning a 14.35. There were small issues on beam, and she didn’t have the best landing on her triple full dismount, but overall it was a solid effort for a 14.4, and she finished up well on floor, earning a 14.35 after showing off very clean tumbling, a lovely Memmel turn, and a big triple full to finish, helping her to a 57.250 for the day and a 113.975 overall.

On vault, Sasada had an FTY with great distance and a step forward for a 13.9. She put up a 14.15 on bars, where she bent her elbows on her stalder, but hit her jam to handstand straight into her Jaeger, an always exciting combination. She had some nice work on beam, finishing with a step on her double back but otherwise only showing minor bobbles here and there for a 14.0. She finished with a 14.05 on floor where she stumbled a few landings but overall looked okay, earning a 56.1 for the day and a 112.650 overall, enough for the silver medal.

Teramoto began somewhat shockingly with a handspring Rudi! Quite an impressive upgrade from her FTY. She’s attempted it in the past with poor results, and though she was a bit messy and took some steps back, she still earned a 14.7, huge for their program. She hit a decent bar routine for a 14.05, but then started showing signs of weakness on beam, where she had a few wobbles, touched her hand to the beam on her switch half, and stumbled her 2.5 dismount, earning a 13.45. She had a rough finish on floor, earning a 12.95 after going out of bounds and then falling on her double pike, a disappointing performance putting her all-around total at just 55.150, two points shy of her all-around score a month earlier. Her score of 112.350 earned the bronze medal.

Yumoto took two steps back on her FTY, earning a 13.7 to start. Her form on bars – a weakness in general – was a little off and she took in just a 13.25 there, but she came back with a huge performance on beam, earning a 15.2 with a 6.4 start value after hitting all connections and a double pike dismount. Without Koko Tsurumi‘s bars and beam in the mix, her beam could be a life-saver for the team come October. Finishing on floor, Yumoto hit her triple full and 2.5, but had a few landing deductions and earned a 13.8 to finish with a 55.950 for the day and a 111.825 overall.

Uchiyama’s FTY was clean, if perhaps a bit short, for a 13.85. On bars, she brought in a 13.75 after being docked for losing her grip on her stalder full and then falling on her inbar shaposh. This is typically her best event, and she is capable of hitting in the mid-15s, so it was a bummer to see her falter. Beam was also rough, with a fall on her switch leap and a messy landing on her double back for just a 12.9. She finished things off well on floor with a 14.0 after hitting her triple full and otherwise impressive and graceful tumbling, earning a 54.500 for the day with her two falls and a 111.350 overall to secure the final guaranteed Worlds spot.

Miyakawa was in the second group, beginning on bars, where she fell on her piked Jaeger. She hit beam for a 13.25, and then on floor, she competed a huge routine out of a 6.2 start value, earning a 14.6 despite a few errors; her full-twisting double layout was a bit underrotated, as was the double double in her final pass. She then went on to compete her Rudi on vault, getting great distance but not quite enough height, taking a big step back on the landing for a 15.05.

In addition to Miyakawa for the final spot on the Worlds team, Yu Minobe, Mai Murakami, Wakana Inoue, Minami Honda, and Yurika Yumoto are also eligible for consideration, though no one in this group has quite the combination of difficulty, execution, and consistency as Miyakawa does on her strongest events, which also just happen to be events the Japanese team sorely needs. Murakami comes close with some nice work on her DTY, but her inability to show improvement on floor will hold her back now that there is more depth in Japan’s camp.

The weekend wasn’t without bad news, however. Tsurumi, the 2012 Olympian who made a comeback to the sport in November, ruptured an Achilles during floor warmups after landing her beam dismount short with several steps back one rotation earlier.

She got off to a clean start on vault, competing a beautiful FTY in the air but stepping both feet over the line for a 13.25. Her bar routine was excellent, going 15.05 for her intricate pirouetting, including a Healy into her Jaeger, and a double layout dismount. On beam, she had wobbles on several elements, including her series, and then took several steps on her double pike dismount to keep from sitting it, which could have aggravated her ankles before her unfortunate floor warmup disaster.

Full results from the NHK Trophy are available here. The Japanese meet again at their event championships, to be held again in Tokyo from June 21-22.