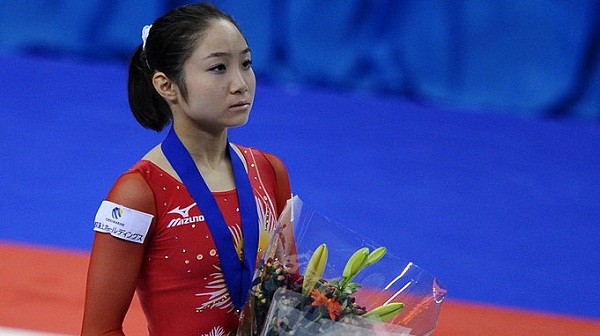 2009 world all-around bronze medalist and two-time Olympian Koko Tsurumi of Japan has announced her retirement from gymnastics at the age of 23.

Following a two-year hiatus due to multiple injuries following the 2012 Olympic Games, Tsurumi was back and looking incredible this year, earning a 15.0 on bars at the WOGA Classic in February before placing fifth all-around after two days of competition at the Japanese Championships in April, where she had a 57.15 all-around score in addition to huge scores on bars (15.2) and beam (14.9).

Unfortunately, at the NHK Cup a few weeks later – where she likely would’ve secured a spot on the 2015 worlds team – she fell back on her beam dismount, and then, looking rattled, went on to warm up floor. A bad landing in warm-ups led to an Achilles rupture, effectively ending her season – and now, her career.

“My goal was to medal at the Olympic Games in 2016,” Tsurumi told the press, adding that she was putting lots of work in on her favorite event, the uneven bars. “But time is not on my side.”

Tsurumi didn’t feel her recovery was moving along quickly enough for her to train Olympic-ready routines before the Games are set to begin next August.

Tsurumi’s illustrious career includes individual finals in both Beijing and London, including an 8th place beam finish in 2008 and a 7th place bars finish in 2012. In addition to her all-around bronze medal at her history-making 2009 World Championships – the first worlds medal for Japan in 43 years – Tsurumi also won the silver medal on bars and finished 6th on beam, and at worlds in Tokyo in 2011, she finished 7th on bars.

Japan has a very strong team right now with tons of fantastic young talent, and yet still the loss of Tsurumi is a great one. As a leader, a consistent competitor, and a gymnast with beautiful style on all four events, she still had so much she could give to this program and will absolutely be missed.

We wish Koko the best of luck with her future endeavors!