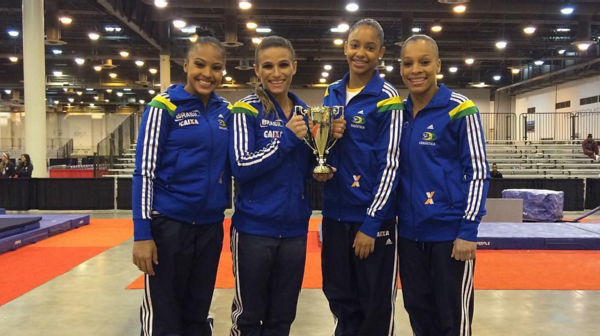 Five of the women who competed at the 2015 World Championships began their Olympic year revivals in the international session at the annual Houston National Invitational over the weekend, with the young Brazilian standout Lorrane Oliveira capturing the title with a 55.45.

Oliveira, who surprisingly surpassed teammates Jade Barbosa, Daniele Hypolito, and Flavia Saraiva for her country’s best individual finish in Glasgow, went on to become the Brazilian national champion a month later. Going from one of many Olympic hopefuls to probable lock for the team – she was one of five named to compete at Jesolo and at the test event later this spring – she now continues to show her huge potential even despite some slight downgrades in Houston, where she competed just an FTY instead of her usual powerful DTY and she was a bit toned down on floor as well as showing a few stumbles there in the all-around competition.

What’s best about her, though, is that she can go up literally anywhere and put up a strong and steady performance, which has been missing from Brazil’s program for quite some time. Their test event team is very flashy, with two of the most-anticipated young stars in Saraiva and Rebeca Andrade as well as the legendary Barbosa and Hypolito. Oliveira tones them down as a sort of Aly Raisman from last quad with her confident sets and her ability to surpass those who might be a little more hyped.

In Houston, she showed great work on bars, hitting both of her routines in the team cup and in the all-around competition, and between the two days she actually cleaned up a couple of her skills, especially her van Leeuwen. On beam, some of her form could use a little polish, but she’s coming from one of the strongest beam countries in the world (seriously, despite qualifying ninth at worlds, their beam was third!) so she gives a nice balance with her strengths coming out elsewhere.

The silver medal went to Oksana Chusovitina, who looked fierce and ready to rumble with a big 54.725. The 40-year-old going for her seventh Olympic Games had the top score of the day on vault, competing a handspring layout half with a hop and her usual “oh Oksana, we forgive you” form. But vault aside, I was actually super impressed with her. It’s not easy to do one event at her age, and yet she has four high-level elite routines.

On bars I loved her hop to jam to handstand to Jaeger, and honestly I always fangirl a little seeing her full-out dismount, which we see in competitions all over the country and world on a daily basis without ever thinking about how they’re actually called the Chusovitina. She did have a split jump on beam that got maybe 110 degrees of “split” to it, but otherwise killed it on her awesome front tuck mount, bhs layout, and stuck double tuck. I don’t think I’ve ever appreciated her low to beam choreo either, but I did this time around. On floor, she hit her routine well on both nights, just taking out the front pike out of her front full pass during the all-around competition after a messy-ish landing that didn’t allow her to punch.

She’s been using her time wisely to prepare for the test event, where she’ll have to compete in the all-around in order to earn a spot at the Games. In addition to HNI, she has the WOGA Classic coming up this weekend, and I’m sure we’ll see her at a few challenge cups along the way as well, but among all of those who have yet to contend for spots, I think I’m the least worried about this seasoned pro, who is now competing with some gymnasts born after she’d already made her third Olympic appearance. I’ll never get over it.

One of these gymnasts is Brazil’s Carolyne Pedro, who placed third right behind Chusovitina with a 54.35. Pedro, who turns 16 this year, is Brazil’s best new senior and is still in contention for the country’s sixth and final spot on the Jesolo and test event teams. Her solid finish in Houston a point over the more experienced Maria Cecilia Cruz could definitely work in her favor.

While she has some great skills, she does have a lack of attention to detail working against her. Her legs were messy on her FTY vault, her bar routine had an awesome toe full to Maloney to bail to stalder to Ray connection but the entire thing was full of leg separations and weak form, she’s incredibly cowboyed on her double tucks, and she takes steps on nearly all of her landings on floor. Once she cleans up she could probably add a full three or four points to her all-around score, so I’m hoping that becomes a focus and that she’ll get a chance to show a bit more polish in the meets coming up.

I was quite a bit bummed watching Paula Mejias of Puerto Rico place fourth with a 53.45…not because I didn’t want her to do well, obviously, but because she is probably the strongest gymnast from last year’s worlds left out of the test event due to a bad qualification day there and it is sad seeing her do so well now knowing Rio isn’t an option. So I’m sad personally because I think about how badly I want her in Rio, though I’m thrilled she’s staying with the sport at such a high level.

Mejias’ talents lie on vault and floor. She’s a world cup champion on both, and while her bars and beam don’t quite match up (she lacks difficulty on both and tends to lose form a lot on bars), the power events are great for her. She actually crashed her tsuk double full on one knee in Houston but hit her handspring tuck full, but on floor, she was magnificent. Easily the best routine of the session and not to be missed.

The 2.5 to front full stuck cold and the whip straight into the double arabian! SO good. She got a 14.5 for this routine, easily taking the win. It’s a shame that worlds ten months before the Games is the preliminary qualifier because she’s been working hard over the past year especially and if she had the chance at this point, she’d easily make it. Why again are test event spots limited?!

Cruz was fifth with a 53.4 after looking her best on beam, where she struggled with amplitude on some of her leaps but showed a nice full L turn to opposite direction pirouette. Otherwise, she fell on her piked Jaeger on bars (though she hit it in the team competition) and had great work with her turns on floor…I think she does a million of them, give or take. She’s definitely one of the Brazilians considered for the final Jesolo and test event spot, but it’s hard to see where they’d stick her into a team final at this point.

Thema Williams of Trinidad & Tobago (competing at the event with the group from Geddert’s Twistars, where she trains) and Israeli national team member Shailee Weiss (who trains as a level 10 at Universal Gymnastics, home of Danell Leyva) rounded out the all-around competitors in sixth and seventh with scores of 47.95 and 46.2, respectively. Both had several falls, though Weiss had a solid floor routine to put up the second-best score of the day with a 13.85 after hitting a double pike, 2.5 to front full, and open double tuck and Williams showed great improvements on bars with a huge Tkachev and Jaeger.

Also competing here was Twistars’ Alyssa Al Ashari, who made her elite debut in 2015 but didn’t continue past the Secret U.S. Classic. She did all but vault in the all-around, where she had promising work on beam and floor but unfortunately muscled her way through bars and arched over on a couple of handstands. Her team performance on the event was great, however, and her handstands were actually really excellent, not typical of young elites who focus more on big skills instead…perhaps it was trying too hard to hold the perfect handstand position that caused her to arch in finals?

On beam, she has the most unique sequence from a scorpion hold down into her low to beam choreo, and she hit all of her skills well aside from a couple of pauses between connections, earning a 14.05 as the second-best of the day on the event. And on floor, she has some pretty basic tumbling with a double pike, double full, 2.5 and a double tuck, though again her presentation was great considering her age and I really enjoyed the performance. She’s improved tremendously since last year and should definitely be in the mix at nationals this year if she hits at Classics.

Barbosa competed only on bars, an event which Brazil’s WAG program technical manager Georgette Vidor said was shaping up to be a strong one for the 2008 Olympian. Her legs were super messy on the Ricna to pak and she whacked them on the floor, yet continued into the Maloney to bail (a bit short) to Ray in addition to hitting her toe full to Tkachev and double layout with a small hop. Her 13.4 there was the second-best of the day, and even with the issues, was better than most of her routines last year so I can see it shaping up to be a solid set for Brazil, which really struggled on the event at worlds.