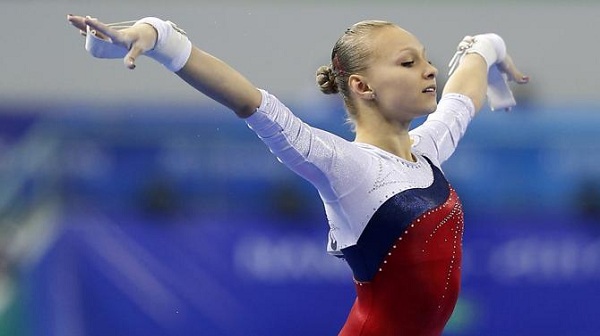 Russia won yesterday’s Team Challenge at the DTB Pokal with a total of 170.296, adding almost a point to their score in comparison to qualification and leaving Germany well behind them.

The Russian team began their competition on beam. Natalia Kapitonova started them off with a solid routine, earning a 14.033 (6.3/7.733). Unfortunately Angelina Melnikova fell on her acro series, but managed to finish her routine well with a very nice double pike dismount. Evgeniya Shelgunova provided the third beam score for Russia, a 13.9 (6.0/7.9). After her disappointing performance in qualification this was her only event of the day.

On floor Anastasia Dmitrieva opened for the Russian team with a really engaging routine, getting the crowd to clap along. She showed a double layout as well as two whips into a double full and a double L-turn into a full turn, for a 13.8 (5.9/7.9). Melnikova got the highest floor score for the Russian team, a 14.433 (6.1/8.333). She showed a double layout as well, a piked full-in, two whips into a double tuck and a nice double pike. Kapitonova showed a mostly solid floor routine for a 13.533 (5.6/8.033), showing a beautiful Mustafina turn but also incurring an out of bounds deduction on her second pass.

On vault Kapitonova showed a nice full twisting yurchenko, while her teammates both showed double twisting yurchenkos. Dmitrieva had major form issues during her vault and didn’t manage to stand it up, falling right to her knees after the landing. Melnikova managed to improve her vault score from qualifications by more than half a point, scoring a 14.733 (5.8/8.933). As expected, Russia dominated on uneven bars, not counting a score below 15. This also was the only apparatus Daria Spiridonova competed on today, scoring a 15.133 (6.6/8.633) and tying with teammate Kapitonova for second place on the event. Since she’ll need another event beside bars to make the Olympic team this summer it would have been interesting to see her on beam again today.

Germany managed to stay in second place behind Russia, earning a team total of 164.796. Their beam line up consisted of the three gymnasts who put up the highest scores on beam during qualification, Pauline Tratz, Leah Griesser, and Sarah Voss. All of them managed to hit their routines, which is quite important for the German team as they generally tend to struggle on beam and will have to start their competition at the Rio test event on this apparatus.

On floor Tratz opened for the German team with a nice piked full-in and a tucked full-in as her first and second passes but unfortunately had to put her hands down after her double tuck, earning only a 13.133 (5.6/7.533). Voss struggled a bit with controlling her landings on floor, going out of bounds multiple times after her tumbling passes. Griesser finished the German floor rotation with a very expressive routine, connecting beautifully with the music. She scored a 14.033 (5.5/8.533), proving her value to the German team that traditionally has a hard time putting up good numbers on the event.

On vault we saw Elisabeth Seitz for the first time in today’s competition, where she competed a nice full twisting yurchenko for a 14.066 (5.0/9.066). Tratz vaulted a full twisting yurchenko as well, not going for the 1 ½ and scoring a 14.233 (5.0/9.233). Voss finished up her competition with a good full twisting yurchenko as well. On bars we got our only glimpse at Lina Phillipp, where she started the German team off with a 13.633 (5.8/7.833) and managed to impress the crowd with her Moors dismount. Unfortunately Griesser fell on her jaeger after being consistent the whole weekend but managed to stick her double front dismount. Seitz finished things up for the German team and showed a very good bar routine, including a Downie to Pak Salto and a toe-on full into her full-in dismount. She earned a 15.366 (6.6/8.766) which once again proved to be the golden number on uneven bars.

The Swiss team started things off on vault where Thea Brogli and Ilaria Käslin showed nice full twisting yurchenkos. Giulia Steingruber was expected to compete her double twisting yurchenko but balked mid-air, only showing a tucked yurchenko vault. Unfortunately her problems carried over to uneven bars where she fell, earning only a 12.266 (5.7/6.566). Käslin fell as well, while Caterina Barloggio posted the highest bars score for the team from Switzerland, a 13.400 (5.0/8.4).

Unfortunately Käslin had to take another fall on beam on her switch ring. She split the beam and stayed down for a few seconds, scaring everyone for a moment. Despite being in pain she got back up after taking a few seconds to compose herself and finished the rest of her routine beautifully. After the fall the crowd really got behind her, cheering for every element and giving her a huge applause after her Gainer layout dismount. Steingruber managed to come back from her disappointing performances on vault and bars with a very nice beam routine that included a back handspring into a layout as well as her eponymous dismount, a Gainer layout with a full twist, though it was a bit piked. She won the event with a score of 14.766 (6.1/8.666). Her teammate Barloggio tied for third on beam, scoring a 13.900 (5.3/8.6).

Brogli started the Swiss team off on floor, scoring a 13.1 (4.8/8.3). Käslin posted a 13.833 (5.5/8.333) for a solid routine only minutes after her fall on beam. Steingruber was easily the highlight on floor. Today she was able to stick her Silivas after a deep landing on the pass in qualification. She also showed a double layout as well as a beautiful double pike to finish. Once again she scored a 14.766 (6.0/8.766), winning the event and helping the Swiss team to finish in third with a team total of 161.530.

Poland finished in fourth place with a team score of 160.163 using only three competitors. They started their competition on vault and Marta Pihan-Kulesza, Katarzyna Jurkowska and Gabriela Janik all showed nice attempts, putting the Polish team into the lead after the first rotation. Pihan-Kulesza, Jurkowska and Janik were the only gymnasts competing for Poland today as they had posted the three highest scores for the team on every apparatus in qualification. But unfortunately both Janik and Pihan-Kulesza had problems on bars. Janik fell on her double front dismount while Pihan-Kulesza came off on her toe-on full. Jurkowska showed a clean routine that included a Gienger as well as a double front dismount, scoring a 13.700 (5.2/8.5).

Beam was solid again for Poland with Pihan-Kulesza tying for third on beam for a score of 13.9 (5.9/8.0) and Jurkowska nailing a Gainer layout with full twist as her dismount. On floor Janik and Jurkowska once again put up solid routines, scoring 13.566 (5.3/8.366) and 13.500 (5.3/8.2) respectively. Unfortunately Pihan-Kulesza, who was last up for Poland, struggled quite a bit there. She only scored a 12.033 (5.6/6.433) after coming in second on the event during qualification due to falls on her punch front and her front double full.

It was quite interesting that Poland only used these three gymnasts in today’s final since Janik and Jurkowska are nominated for the Rio test event next month. Jurkowska looks like a sure bet right now, outscoring her teammates in the all around today as well as on Friday. Meanwhile, it seems like Pihan-Kulesza and Janik are still battling for the second spot.