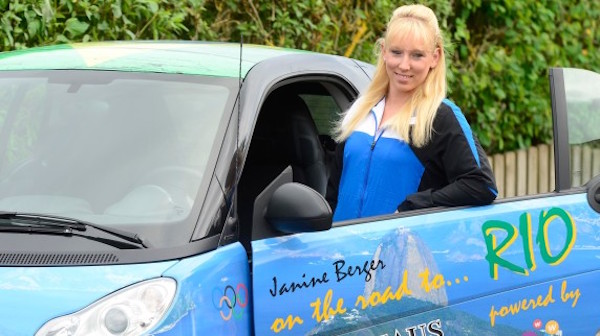 This interview with 2012 Olympian Janine Berger of Germany originally appeared in the Augsburger Allgemeine. Thanks to Sina Rothfuss, we’ve translated it into English for you.

Janine Berger’s dream of winning an Olympic medal on vault sadly won’t come true in Rio this summer. Since 2012, Berger has been dealing with several severe injuries, and though she had a strong run at European Championships in 2014 as well as a brief comeback on bars last fall, now two months before this summer’s Olympic Games all hope is gone.

“I won’t compete at nationals at the end of June,” said the 20-year-old in an interview. “This means that Rio isn’t going to happen.”

Ms Berger, as an elite athlete you are used to dealing with ups and downs. But missing the Olympics must be extremely hard.

I would be lying if I said I didn’t have any problems. Lacking motivation is the least of them. Of course, the last few weeks haven’t been the best of my life and of course I am – or was – in a deep hole mentally. Rio – that was my dream and I worked hard for that dream. You do everything for that goal and you get depressed when you want it but your knee doesn’t.

The knee. Back in 2014 when you had that accident in Stuttgart, everything ruptured. ACL, meniscus, and there was damage on your cartilage. But you got back up and looked ahead, full of hope. What happened?

Until November of last year, everything went great. And even now, things are going well from time to time. But when I push my limits and train several hours a day, I feel pain. Of course pain is part of this sport but eventually you can’t do it anymore. And time is running out as well.

Can family or friends do something helpful in such a situation?

Of course your family supports you. They’re always there for me. Without this support I would probably fall even deeper. But it is extremely hard for me to be happy with myself again. You’ve been in this business for years and it’s always been about success and if that is missing you feel – frankly speaking – like a loser. And that is something you have to deal with yourself. It doesn’t help if someone is telling you that it’s not true. If you set ambitious goals for yourself and you reach them, you always have high expectations for yourself and you are not happy taking small steps.

What you are saying is that in addition to the physical requirements, the mental aspect is important as well if you want to be successful.

If you don’t have this mental strength, it won’t work. As soon as there’s just 1% going wrong at this level and in this situation, you can’t do it. That’s why gymnastics is one of the hardest sports. And if you are doing great for a week but then you immediately lose three months of progress, you eventually can’t take it anymore mentally.

To be precise: it’s not enough to train hard.

I think a lot of people believe that it’s easier than it is. All I can say is that everything needs to be perfect. Health, fitness, and a bit of luck, that’s what you always need. That’s why only the best go to the Olympics and that’s why the Olympics are the highlight for every athlete.

When you came back from London four years ago you started talking about Rio 2016 pretty soon after. In your current situation, are you already thinking about Tokyo 2020? Could such a plan maybe help get you back in shape sooner?

Age-wise, the Olympics in 2020 are a possibility. But athletes are humans, not machines. I don’t think that there is a single athlete who is only going up and never falls down. That’s why I can’t – and don’t want to – think about goals that are this far in the future right now.

But you will continue to train?

There is more to life than just gymnastics. Do you already have plans to go to college?

I’ll go to Munich in the fall and study sports, media, and event management.

Back to the sport and its dark sides. One of the biggest talents in German gymnastics, Elisa Chirino, lived for her dream of going to Rio. Two years ago she suffered a fall on bars in training and has been paralyzed since. Does the fate of the 19-year-old affect you?

Of course. We know each other. One week before her accident I competed with her. That doesn’t leave you unaffected. We are in contact through Facebook.

On Facebook, Chirino writes that she wants to give others hope and that there will be a day when things go uphill again. Does that message touch you?

Very much. Elisa is my role model. She is a much stronger fighter than the rest of us. She has real problems and she became a strong woman who is taking life into her own hands and is looking ahead. We can only salute her for that.

3 thoughts on “In Translation: Janine Berger Can’t Go to Rio”