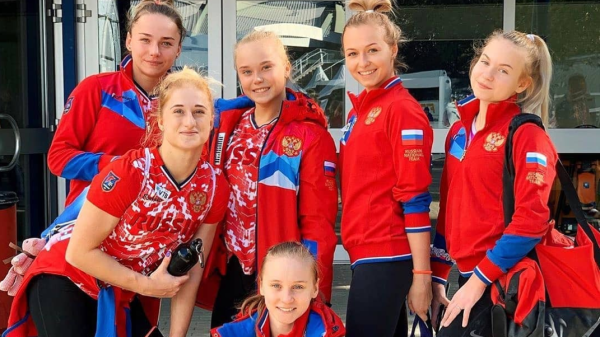 The tenth subdivision for women’s qualifications includes the Argentinian and Russian teams, and then individuals from Israel, Bolivia, El Salvador, and Panama.

Russia is already qualified, so today it’s all about looking good enough to make the team final and then to medal next week. This isn’t the greatest team they could’ve put together, so there’s always the fear that we’ll see a meltdown, but Russia is always capable of surprising. Anastasia Agafonova looked incredible at a world cup recently, and it was no surprise to see her added to the team, Angelina Melnikova has been so good this year, Lilia Akhaimova is bringing big scores on vault and floor…I think they have the potential to surprise. It’s either going to be really really great, or a total disaster.

Argentina is also here, and while they don’t have a shot really at qualifying, they have an awesome team, and I’d love to just see them do well.

Angelina Melnikova of Russia will be the big all-around hopeful there, and both Anastasia Agafonova and Lilia Akhaimova are competing all four events, so it’s possible they could get into the final as well, but Agafonova almost never does vault and floor, so if anyone makes it happen, it’s Akhaimova.

Martina Dominici is Argentina’s huge Olympic hopeful, and even if she misses the final here, I think she’ll pretty easily qualify, though Abigail Magistrati is also super strong and I hope to see her do well!

None of the individuals in this subdivision are strong enough to make the final or even qualify for Tokyo, I think…it would be cool to see someone have a blowout day and get in, like Lihie Raz of Israel or Paola Ruano of El Salvador, but based on their scoring potential and the current cutoff scores, they’d need to be at their absolute best to do it.

I think Lilia Akhaimova is doing two vaults for Russia, and her Rudi can score pretty well, so I’d consider her having potential for the final. That’s pretty much it for vault in this one, though.

Melnikova, Agafonova, and Daria Spiridonova all have potential to make the final depending on how they look in qualifications. For Argentina, no one will make the final, but Dominici has a lovely routine and Tarabini has HUGE releases!

I don’t think any of the Russians will make the final, though I’d like Melnikova and Agafonova to get close. Agafonova especially, as she’s looked so good there recently. No one else has a real legitimate shot at the final, but when Argentina’s Ayelen Tarabini is on here, she is ON.

I hope we see a great set from Melnikova, as this is usually a pretty safe final for her to make…but I said the same at Euros and then she made every final but floor. SHRUG. I also wouldn’t count out Akhaimova, who is capable of a solid mid-13 if she hits all of her difficult tumbling.

For Argentina, Tarabini is also a great tumbler on floor, and I actually don’t know many of the individual competitors here super well because we’ve seen most of them so rarely at major meets that have people filming videos, but I’m hoping for some NCAA sass from Kaylee Cole of Bolivia, and maybe we’ll discover someone new?!