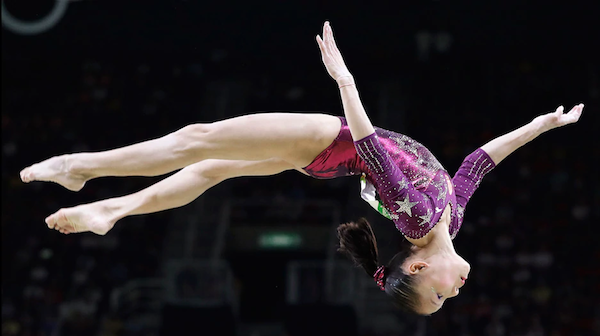 It’s time for the 287th edition of You Asked, The Gymternet Answered!

We apologize if we haven’t gotten to your question yet, but we try to answer in the order in which they were received (unless they are super relevant and need to be answered in a timely manner).

Something you want to know? Ask us anonymously by going through the contact form at the bottom of the page.

Please note that I am offline for the month of June, and am posting a backlog of questions and answers in the meantime. If you submit a question, it will not be answered until at least July!

Thank you, and stay safe!

Do you know if Shang Chunsong will be trying for 2021? What are her chances? She had a terrible end to her Olympics and I’d like to see something good happen for her!

Chunsong is still training at the provincial level, and has competed nationally a few times this quad, including at nationals both in 2018 and 2019…and she even won the national floor title in 2019. However, she hasn’t really been at a strong enough level to contend with the other members of the national team which is why she isn’t on the national team and earning international assignments. Maybe the next year will give her more time to get on that level, but honestly I just don’t see it happening for her at this point and don’t think she’ll be a legitimate contender for 2021 if she isn’t part of the national team situation right now. Part of being on the national team is having the people who choose the Olympic team around you in the gym while you’re training every day, so if someone like Liu Tingting has a bad national meet or doesn’t go to nationals at all next year, it won’t mean much because the coaches still see her in the gym every day and they may actually be the ones saying “skip nationals this year and focus on Tokyo.” If Chunsong isn’t placed on the national team by, say, January of 2021, then she really just doesn’t have a shot at all.

I’m confused what USA Gymnastics means when they say they shouldn’t communicate with a gymnast that has lawsuits pending, like not inviting Aly Raisman to nationals in Boston. What does that mean for an athlete currently competing for the national team that has legal stuff going on with them, like Simone Biles? They even feel like they have the right to post photos and videos of her on social media…is she an exception? Or is that just a BS excuse so they don’t have to talk to Aly and other survivors?

Any company that is being sued generally has lawyers advising them to not speak to the people suing them, because it can further complicate things legally, and all communication is supposed to go through the lawyers at that point. It’s not anything personal against Aly…people within USA Gymnastics are just literally being told “do not talk to her without a lawyer present.” I think once the litigation is cleared up, then hopefully USA Gymnastics can start to maybe work with her and get some ideas for how she could make the sport better, but for now there’s really no way for them to work together.

I don’t believe Simone is involved in any litigation with USA Gymnastics at the moment, so I don’t think there’s any real conflict there, at least not at the same scale as what’s going on with Aly. I also think that as a national team member (or even just someone competing at USA Gymnastics events), Simone has to sign contracts allowing USA Gymnastics to use her image for promotion. All gymnasts sign photo waivers and have to agree to how their image is used, so she might not like being the face of the program that has done so much to hurt her, but unfortunately to keep going within this program, she kind of has to play ball.

Structurally they’re the same…like in terms of the material and things like that. The big thing for women’s bars is the tension between them as well as the distance they’re set, but the bars themselves are the same. Men’s high bar is quite a bit more narrow than either of the women’s uneven bars, so I think it’d be easier to wrap your hands around them, though I’ve never gripped a high bar so I’m not totally sure what they feel like. I feel like the high bar also has a bit more give to it than the uneven bars do, which makes it easier for the men to get the rebound they need to do the bigger release elements.

What do you think is Larisa Iordache’s plan right now, being aware of the fact that she won’t qualify to Tokyo? Is she just playing around in the gym and then announcing her retirement?

I guess so. Now that she has a bit more time to prepare before her final qualification opportunity at European Championships, she’ll probably delay her announcement to see if it’d be possible to make it happen…but I’m not getting my hopes up about her returning, as much as I’d love to see it. And that’s fine. She needs to do what she needs to do!

It’s rare that a gymnast is getting the stipend when they’re simultaneously doing NCAA, because if they’re not regularly going to national team camps or representing the U.S. in international competition, their stipend typically gets taken away until they come back and put in more time with the team. You can’t just be on the national team in name only and get paid; it actually requires being an active member of the team, and so often if a gymnast is out with a prolonged injury or isn’t getting international assignments as a top member of the team, she will end up with only half a stipend, or nothing at all. With someone like Trinity Thomas, she probably got the stipend after nationals last summer and used it to take care of any costs she needed to take care of while training for worlds, but then once she got back to Florida and wouldn’t be taking part in the spring half of the elite season, her stipend was no longer available to her.

With the disqualification, does this mean that Australia have now qualified as a team to Tokyo?

I assume this means in terms of Russia not being able to compete at the Olympic Games AS Russia, but no, the Russians will still be able to compete with a full team even though they can’t compete under their flag, so Australia will not be able to send a team.

If the 2021 world championships are canceled, will there be a team all-around event in 2022?

Worlds in 2021 are going to happen with the Olympics also happening, assuming that the world is back to normal in terms of COVID-19. But if they do get canceled due to COVID and then we have to wait until 2022 for worlds again, then we’ll get a full worlds with a team competition, not just an individual worlds for 2022, since worlds that year will act as a qualifying meet for teams in 2024.

If Russia brought a healthy Aliya Mustafina, Angelina Melnikova, Vladislava Urazova, and Viktoria Listunova to Tokyo next year, could they compete well against the United States? Especially if the U.S. has mistakes like they did in Stuttgart.

Yes, for sure. Honestly, I wouldn’t even include Aliya in that…with Angelina, Vladislava, and Viktoria, I don’t think they’d really even need Aliya to be competitive against the U.S., especially as they have pretty great depth right now and could bring someone like Elena Gerasimova or Lilia Akhaimova and still be super strong. I still think the U.S. will have the edge, especially with Simone Biles, but if Simone ends up not there for whatever reason, both teams could be close to being on the same page.

Do you know when the FIG will release the code for next “quad” or will they keep the same code for 2024?

The potential changes to the code have been released, but they haven’t been voted on or approved yet, and now that they’re going to be using the 2020 code into 2021 due to the Olympics getting pushed back, we might not get the official updated version of the 2024 code until next year.

If Simone Biles and Grace McCallum wanted to try for the Pan Am Games last year, do you think they would have made the team? Who would they have replaced?

I think they both would’ve made the team if they wanted to try for it. Since Tom Foerster chose the Pan Am Games team via all-around results at the U.S. Classic, the team would have been Simone, Grace, Riley McCusker, Kara Eaker, and Leanne Wong, so Morgan Hurd and Aleah Finnegan wouldn’t have ended up making it based on that.

Have a question? Ask below! Remember that the form directly below this line is for questions; to comment, keep scrolling to the bottom of the page. We do not answer questions about team predictions nor questions that ask “what do you think of [insert gymnast here]?”

8 thoughts on “You Asked, The Gymternet Answered”