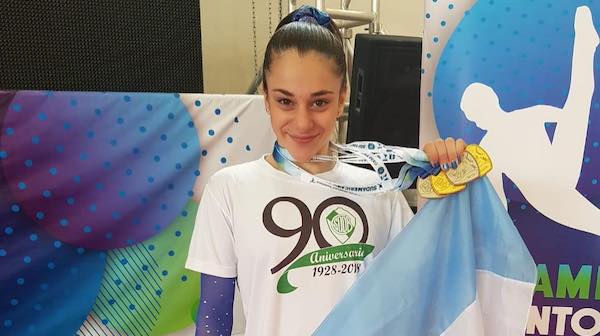 Welcome back to our Introductions series! Formerly Junior Introductions, we’re now going to also be introducing you to lots of first-year seniors as well, because we didn’t get to as many junior profiles as we wanted to last year, and there are a ton of 2005-born gymnasts you need to know about.

Today, we want you to meet Meline Mesropian, a 15-year-old from Argentina who won the junior national title in 2019 and has potential to be a top senior competitor for the team this quad.

Meline made a name for herself when she was selected to represent Argentina in the youth division at the South American Junior Championships in 2018. It was her first big assignment, and she came away with four medals, including gold on bars and with the team, as well as all-around and floor silver. This was a huge break for the 13-year-old, and she was just as good at nationals the next month, again winning all-around silver as well as medals on beam and floor in event finals, scoring in the same range as gymnasts two years older than her.

2019 was Meline’s first official season as a junior, and she started it off by winning the all-around, vault, and beam golds at Argentina’s club championships, earning a spot on the team traveling to the FIT Challenge in Belgium the next month. She went up on bars for the team there, helping Argentina to sixth place in the final, and she finished 14th all-around among the 68 junior competitors, where she earned a career-best 49.466. 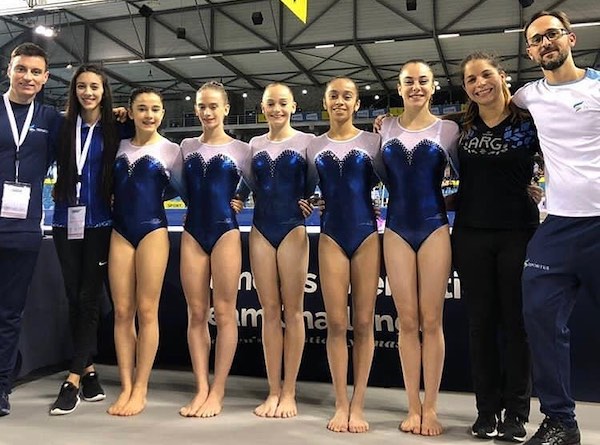 The Argentinian juniors in Belgium

At nationals that summer, Meline won the junior title by just about two tenths over fellow first-year senior Brisa Carraro, and she also took the gold on beam as well as the bronze on vault. She was picked to lead the junior team at the South American Junior Championships that fall, and though a miss on vault held her back to eighth place in the all-around, she and her teammates put up an incredible fight to upset for the team gold over the usually dominant Brazil, and Meline also picked up an individual bronze medal on floor with a 12.433.

Obviously, the COVID-19 pandemic meant Meline, like most gymnasts, didn’t get a competitive season in 2020, so she’ll be going into the first year of her senior career missing out on a vital year of valuable experience, but hopefully we’ll see the world get back to normal soon so she can make her senior debut.

Meline is a pretty talented all-arounder with lovely skills on all four events. When we last saw her compete, she had a pretty consistent Yurchenko full on vault, but she’s since started training a double, so perhaps we’ll see that upgrade hit the floor this year. On bars, she has competed a piked Jaeger, Pak, Maloney, and double front dismount, and her most recent routine was awarded a 5.2 start value, but I’ve seen her train a toe full to Maloney to Pak, so it seems she’s been working hard on upping her connections here.

Her beam routine features a lot of single elements, but she’s very clean there on skills like aerials and leaps, and she also has a tidy and consistent back handspring layout stepout series. In 2019, she was dismounting with a double full, but she’s also trained a double tuck more recently, which looks super open and very powerful, so it could definitely be something to look forward to in the future. 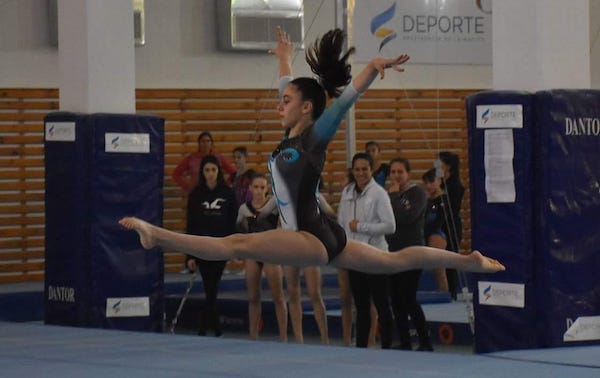 Floor is where I’m hoping she’ll be able to bring the most upgrades as she gets older and stronger. In 2018, she was opening with just a front layout, six months later she was starting her routine with a 2½ and a double tuck, and by the end of 2019, her routine opened with a double pike and then a double tuck, putting the front layout third and then ending with a double full. Now that she has all of the D skills under her belt, it would be great to see her going for some Es to get to the next level.

Argentina has been a team on the rise, especially over the past quad. In 2018, the team made the top 24 at worlds for the first time since the open scoring system was introduced in 2006, and the women who competed in Stuttgart a year later finished 19th, just one spot higher than their best-ever finish (Argentina previously finished 18th in both 1991 and 2001).

With a couple of retirements over the past year, the top gymnasts making up the core squad right now are all very young, mostly born in 2002 or later, and Meline should fit in nicely with this group. With upgrades, she’ll add depth as a gymnast who can go up anywhere needed, though the team will need to fill a hole on vault, beam, and floor now that Ayelen Tarabini is no longer competing, and I’d love to see Meline step up and take over.

I actually had a hard time picking here, but I ended up going with her beam. It’s not her most difficult work – in fact, I think it’s her least difficult! – but I think what’s most important to note with Meline is how precise, fluid, and elegant she is with her movement, and this routine from nationals in 2018 shows it nicely…especially since she’s just 13 here. You can also swipe ahead in the post to see clips of her early work on floor, vault, and bars.