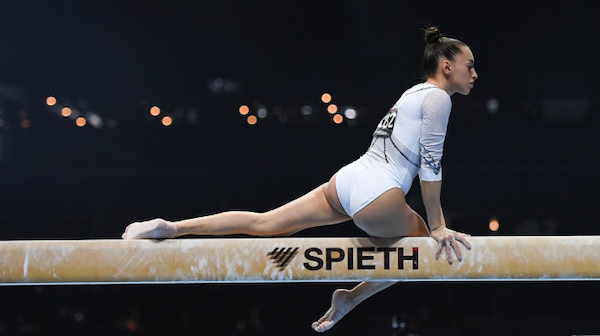 The Russians were able to pick up non-nominative berths in both the WAG and MAG fields, as first-year senior Viktoria Listunova, who finished second overall in the women’s competition, was the top eligible gymnast with a 55.465, while 2020 and 2021 Russian national champion Aleksandr Kartsev, who was third overall among the men, was the highest eligible all-arounder with an 84.731.

Since Russia qualified both WAG and MAG teams to the Olympic Games at world championships, their athletes were only able to earn non-nominative berths, meaning the spots belong to the federation, not to the gymnasts who earned them. But the other two gymnasts in both divisions were from countries that didn’t qualify teams to compete in Tokyo, meaning their spots are nominative, and belong only to them.

Both athletes were leading contenders to earn these Olympic berths, but it wouldn’t be a done deal for either until the competition was over, and though Asil ended up nearly two points ahead of the next competitor to safely secure his spot despite some struggles on pommels, Iordache had to fight back from a fall on her first apparatus, beam, and she wound up only three tenths ahead of the next eligible competitor.

It was a nail-biter of an experience, watching these athletes and knowing what they were capable, but understanding the type of pressure they were under to win these spots and fearing they’d let it affect their performances. But both fought until the end, overcoming years of setbacks and disappointments to join an exclusive list of gymnasts who get to call themselves 2020 Olympians.

Iordache had only just turned 16 when she competed at the Olympic Games in London, though a foot injury only weeks before the Games limited her, and the girl who had been called “the next Nadia Comaneci” for years and who led Romania to the team gold at Euros just months earlier wasn’t able to reach the levels of individual success her federation had expected for her.

At the start of 2013, Iordache became the veteran leader of a very young team, and proved herself one of the best gymnasts in the world, earning four medals at world championships and an additional eight at Euros. But a few months into the Olympic year, she broke her finger, leaving her unable to compete at the Test Event, where Romania failed to qualify a team berth. Instead, they were awarded just one individual spot, and though Iordache was back to competing in the all-around a month before the Rio Games, winning her fifth consecutive national title, the federation deemed her unfit to represent the country.

So she started her journey all over again, looking determined to have an even better quad than she’d had previously. She was even the frontrunner for the all-around title going into the 2017 world championships, but then ruptured her Achilles in the touch warm-up on floor before qualifications, an injury that would haunt her for the next several years as doctors told her she had only about a 50 percent chance of returning to competitive gymnastics.

It would be more than three years before Iordache could come back to competition, and even that was threatened when a positive COVID test limited her training time in the lead-up to the 2020 European Championships. But she pushed through, went to Euros, had the highest all-around score in qualifications, led a team of gymnasts almost all eight years her junior to the silver medal, and competed in every apparatus final, winning two golds and a silver.

Though Iordache came into the 2021 Olympic qualifying meet this week as one of the top competitors, she was up against incredibly talented competitors from Russia, Italy, and Great Britain, all of whom had the potential to outscore her if she wasn’t at a hundred percent. But despite falling on her double spin on beam, Iordache still posted the highest score of the competition on that event thanks to her immense level of difficulty, and she breezed through floor, vault, and bars to walk away a 2020 Olympian…and she did it all with a kidney infection that sent her to the hospital later that night.

Asil’s own journey is a bit different. Having just turned 22 this year, this is the first quad in which he’s been eligible to compete at the senior level, but just a few years ago, it didn’t seem like the Olympics would be in the cards for him. Born in the Egyptian city of Alexandria, Asil grew up training in and competing for Egypt, but while he showed some promise when he debuted at the Varna Challenge Cup in September of 2017, he was merely “good,” not remarkable, and he was also a bit inconsistent.

At world championships, he finished 37th in all-around qualifications with just a 74.431, which, for context, is a full ten points lower than what he achieved in Basel this week. Disappointed with his performance, he approached the Turkish national team coaches and told them he wasn’t able to train at a high level in Egypt. He wanted to move to Turkey and train with the national team, something it turned out the federation was happy to help him out with, and so he moved to Izmir that year with the hopes of becoming a citizen and representing his new country on the international stage.

Slowly but surely, Asil – who was then still competing as Abdelrahman Elzamzamy, and later as Abdelrahman Elgamal – improved under his new coaches. He finished fourth all-around at nationals in 2018, and then a year later, he scored an 81.650 in the all-around, becoming the national silver medalist.

Despite becoming a top gymnast in Turkey, Asil was left out of the picture for the 2019 world championships team because he couldn’t compete internationally until his citizenship came through in early 2020 (his name change was a decision that came with his new citizenship). He started out the year by upsetting Ahmet Önder at nationals to win the all-around title with an 82.967, and he then made his international debut for Turkey at the Baku World Cup, where he topped the floor rankings in qualifications with a 14.733.

But then, while he was in Baku, the COVID pandemic hit, and after only one meet back on the international circuit after two and a half years of waiting, Asil’s career was again at a standstill. And when he could compete again at Euros on home soil in Mersin that December, where he had the highest all-around score in qualifications with an 83.232, Asil got injured during training and was unable to compete in the team, floor, and vault finals, and finished just off the podium in fourth place on both rings and high bar.

Asil fought back from that injury to win his second straight national title this year with an 86.600, and he came in one of the leading contenders to win a nominative berth to the Tokyo Olympics. He showed a ton of fight in his qualifications performance, refusing to let pommels win when he started to break. In his first major outing for the Turkish team, he accomplished exactly what his new federation hoped he’d be able to do with the right training and guidance, making three individual finals and winning Turkey’s fourth individual berth to the Games, where he’ll be one of the strongest all-arounders in the world.

As the toughest Olympic qualifier for individual all-around gymnasts, there were only two spots available for roughly 70 gymnasts in each field eligible and hoping to win them, and both Iordache and Asil – who likely would have been among the top individual qualifiers at world championships had they been able to attend in 2019 – were absolutely unwilling to let this final opportunity slip by.

Congratulations to both for overcoming so many obstacles and standing up to the pressure they faced with the challenge of reaching the Olympic Games, and congratulations to the two young Russian gymnasts for helping their country be the first to earn all six available berths between the four team and two individual spots.