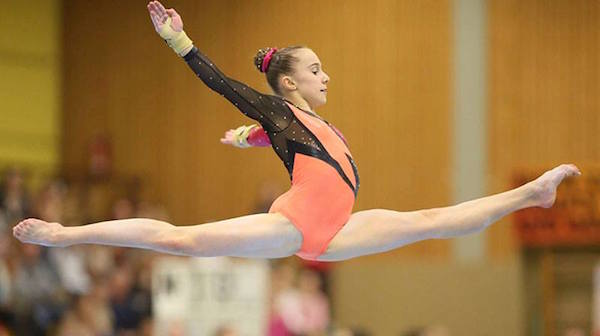 On a gymnastics-packed weekend with British Championships and Jesolo going on, there were also the German Junior Championships in Heidelberg. At these championships, the girls compete in four different age groups from 12-15 years old. At the end of the day, all four age group winners came from the “Kunst-Turn-Forum” in Stuttgart, trained by Robert Mai and Marie-Luise Probst-Hindermann.

The age group 12 was dominated by Emilie Petz who managed to break the 50 points mark. She showed a yurchenko pike on vault, a great balance beam routine, and a floor routine with a double back and double full. Counting no falls, she was way ahead of Sydney Hayn (46.450), who trains in Karslruhe, and Leonie Papke (46.425), who hails from a small club in Bavaria.

The age group 14 was expected to be an open run for the podium between six girls: fan favorite Emma Höfele (Karlsruhe) and her teammate Isabelle Stingl, the two girls from Berlin Anudari Platow and Rebecca Koschny, and then Julia Plattenhardt from Stuttgart and Helene Schäfer, who trains in Chemnitz.

Julia Plattenhardt was the one who came through and secured the top spot with a 51.400, counting one fall on floor, where she usually shines with beautiful presentation. Helene Schäfer (2nd with a 50.350) showed some promise to be as great as her older sister Pauline on balance beam, receiving a 13.000.

Isabelle Stingl secured for herself the third place (50.000). The light gymnast had the best floor routine of this age group. The two girls from Berlin, Anudari Platow (4th with a 49.625) and Rebecca Koschny (6th with a 45,60) had to count some falls and insecurities, while Emma Höfele had a very rough day, counting two falls on beam and getting help by her coach on bars despite not needing it.

The most anticipated session of the day was the age group 15. These girls are eligible for the Olympic Games in Rio next year and are by far the strongest age group Germany has produced in the last years. Unfortunately some of the girls had to deal with some injury issues.

Maike Enderle (Karlsruhe) could only start on three apparatus, competing only a handspring on vault. Sadly, she couldn’t stand up her dismounts on bars and beam after otherwise great routines. On bars the Junior European bronze medalist showed a 5.9 difficulty very well executed but sat down her double front dismount(13.15). On beam she is competing an Arabian, but had to take a fall on her new Steingruber dismount (12.575).

Carina Kröll, who is a nice beam worker and beautiful to watch on floor has problems with her knee and also competed just a handspring vault. On beam (12.925) she had to take a fall on her acro series and on floor she didn’t compete her double backs.

Last year’s champion and Junior European bronze medalist on beam, Tabea Alt, won the competition with a good score of 55.350, despite being out for two months this winter after fracturing her elbow and wrist. Tabea competed a clean FTY (14.25), a 5.8 difficulty bars routine with a full twisting DLO dismount (14.325). On beam she had to count a fall, for 13.35, followed by a great floor routine (13.425).

Tabea was followed by three girls from Mannheim. The second place went to Rebecca Matzon (53.925), who posted the top score on beam with a 14.125. In third place came Florine Harder, who competed a DTY for the first time, scoring a 14.5. In 4th was Amelie Föllinger with the highest floor score of the competition (13.625).

Day 2 for the German juniors meant event finals. Not an easy task, especially for the age group 15, which had less than 12 hours after competing in the all around on Saturday evening.

After qualifying first on every apparatus, Emilie Petz was the clear favorite for the event finals in the age group 12. However, Emilie could only secure two titles, on bars an beam (a nice 13.125). On vault and floor, all-around silver medalist Sydney Hayn, won the titles.

A little surprise was Kristina Iltner in the age group 13, who came fifth yesterday. She won finals on bars and beam. The vault and floor title went to all around winner Kim Ruoff.

For the age group 14 all-around winner Julia Plattenhardt, there were no medals left in the event finals. Isabelle Stingl won vault with a handspring front pike and tuck, as well as floor with a good score of 13.725. The other two titles went to Helene Schäfer with a 12.325 on beam and a 12.225 on bars.

Tabea Alt had great luck, adding three additional titles to her all-around gold. On vault she performed a FTY and a Yurchenko layout for 14.187. Harder, who impressed the day before with a DTY, chose not to perform it and finished third. On bars this age group showed full strength and produced two winners with Tabea Alt and Maike Enderle tying for 1st with the great score of 14.187 each. In 3rd again was Harder with an also impressive 13.90.

After falling on a simple turn in the all around, Tabea Alt nailed everything in beam finals, including a Dudnik series (arial cartwheel to loso to loso) and got a massive score of 14.875. Matzon followed in second with an also great score of 14.3. The injured Carina Kröll managed to get the bronze medal. In a country where beam is typically a cause for concern, these 15-year-olds showed they could all have something to offer the Olympic team next year.

The floor title went to Mannheims Amelie Föllinger, who got a 14.075 for her floor routine. Another medal went to her teammate Matzon in second and Tabea Alt finished in third.

In addition to the videos in this post, keep an eye on Turn News and GermanGymnastics for more being uploaded throughout the weekend. Full results are available here.