The fifth subdivision at the European Games saw competition from Romania, the Netherlands, Spain, Nato Dzidziguri of Georgia, Aleksandra Rajcic of Serbia, and Stelutsa Savvidou of Cyprus.

Unfortunately, we didn’t get to see any of the Romanians on beam for some reason, though Andreea Iridon hit an excellent routine for a 14.1 to earn a qualification spot, while Laura Jurca counted a 13.4 to the team total and Silvia Zarzu’s 11.966 was thrown out.

Jurca got off to a great start on floor with a very entertaining routine. Opening with a piked full-in, she went on to also hit her tucked full-in (albeit with her chest a little low), a fantastic triple full, prescise dance elements, and a double tuck, which she stumbled a bit at the end, though overall I thought it was one of the better routines of the competition, and she really showed a lot of personality in her choreo. 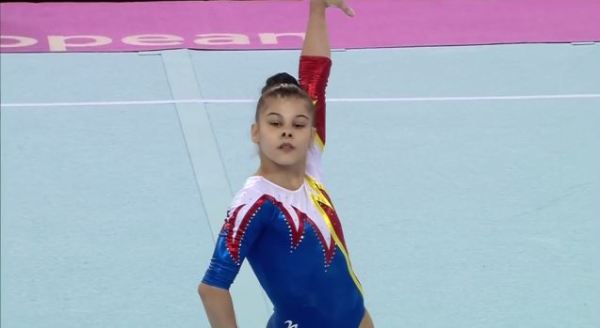 Though Jurca’s score of 13.7 was one of the highest here, she continues her bad luck streak of being so close yet so far when teammate Silvia Zarzu managed to hit a solid 13.933 floor routine, second best of the day and just 0.033 behind Aliya Mustafina. Zarzu hit her 1.5 through to triple full very nicely, only looking a tiny bit under-rotated and taking a hop. She hit her 2.5 to punch front tuck with ease, had a strong landing on her double pike, showecased some very energetic dance, and stuck her double tuck to finish with a big smile on her face. 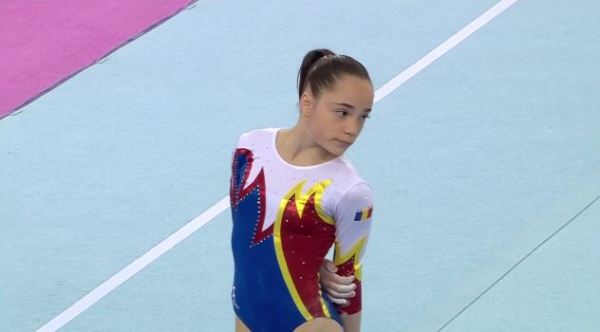 Zarzu preparing for what would be an excellent floor routine.

Up last was Andreea Iridon, who started with a Memmel turn before going into her double pike, which was a bit weak and caused her to put her hands down. She did hit her double full with no problems, actually showed some interesting choreo, hit her 2.5 with a small step over before finishing. With the hands down, she had a 7.3 execution for a total of 12.6, which would be dropped. 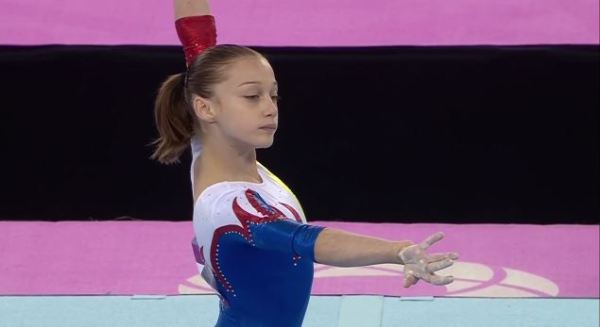 For the Netherlands, Lieke Wevers delivered a dynamic floor routine, showing perhaps the best understanding of artistry out of any gymnast currently competing. Not only is her choreo a perfect fit for her music, she performs it so well she could give workshops on it. Takes a lot of skill, and her dance elements are equally strong – despite having only two tumbling passes, she qualified third out of 78 gymnasts who competed on the event. Her routine began with a 2.5 L-turn into a double pirouette, and then she showed a very high double tuck, taking just the tiniest step forward to steady herself. Her double turn in attitude was lovely, she hit her 2.5 with ankles slightly crossed and a slight step back, and she executed her quad turn very well before finishing, earning a 13.9 with an 8.5 execution score, the best e-score on floor out of any competitor. Oh, and can we discuss how she does pirouettes off the floor after she salutes? She is the Grace Kelly of gymnastics. I might be obsessed. 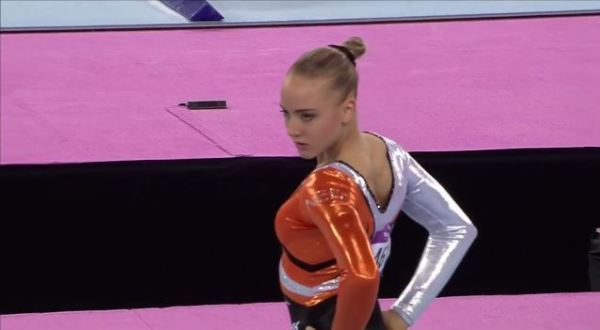 Up next was Lisa Top, who began her routine with a step out-of-bounds on her big piked double arabian, but then she sadly sat her double front after landing it out-of-bounds. Her 1.5 to front full was hit right in the corner, but she again put a foot out-of-bounds on her double tuck in her last pass. With her difficulty at 5.8, Top was expected to post a big number here, but her score of 12.0 (including 0.5 in penalties) wasn’t counted to their team total.

We didn’t see Celine van Gerner on floor, though she earned a solid 13.0 to count to the team total.

Top got things started on beam with a solid front tuck mount, a switch leap to full turn, and then hit her bhs loso, though her knees were a little bent throughout. She didn’t get quite enough amplitude on her switch side, hit her punch front a little low, and then missed the beam entirely on her side somi, taking a fall. She went on to hit her switch half and her double tuck dismount with just a step, but would finish with just an 11.833 here.

Wevers began with a switch to sissone, a very quick side aerial to side aerial, a front aerial to sheep (which was a little short and had a tiny bit of missed footing on the landing), a 1.5 L-turn before her double pirouette (also with some footing issues though she held on nicely), a back handspring, clean side somi, and beautiful gainer layout dismount with just a small step. Her extension is to die for, and she moved very fluidly throughout the routine to earn a 14.066 and a spot in the final. 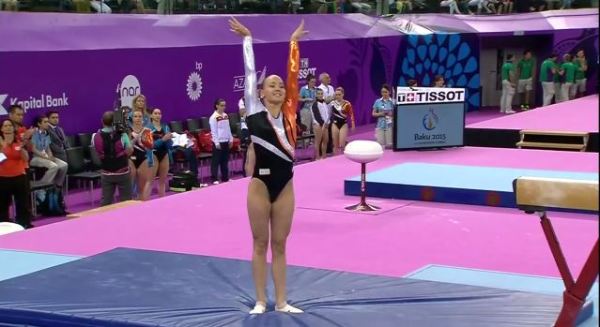 Wevers all smiles in her salute after a great beam routine.

Finally, we saw van Gerner, who her her lovely cartwheel mount before showing a split leap to side aerial, switch half, tour jete half, roundoff layout with a slight stumble, full pirouette, switch to switch side with a wobble, front aerial, and a double tuck dismount with a small step. Even with the slight mistakes, she managed a 13.7, though she was just shy of qualifying into the final due to her teammate three tenths ahead of her.

For Spain, the lovely Claudia Colom began with a bounce back on her double tuck, and then went a little wild on her 2.5, which she landed out-of-bounds. She landed her Rudi well with just a step, but then her double pike looked a little short and she seemed to over-rotate on purpose to try to get it fully around but ended up overdoing it and took several steps back and out-of-bounds for an 11.466.

We saw Colom again on beam, where she began with a balance check on her bhs loso. She hit her front aerial, had a check at the hips on her full Y turn, and then fell on her side aerial, which was landed nicely, but a balance check a second after the fact threw her off. She went on to hit her switch to wolf jump, switch side, and low double pike, which was landed scarily close to the beam. She earned an 11.8 here with a 5.1 d-score.

Her teammate Ainhoa Carmona performed a great Y turn on beam, followed by a bhs loso with a leg up on the landing, a switch to wolf jump, a side aerial, front aerial, and switch half before dismounting with a punch front full with a small hop, a very steady routine for a 12.833.

On floor, Aleksandra Rajcic of Serbia performed a double tuck landed out-of-bounds, a 1.5 with slight leg separation, and a front full with a step along with some very nice leaps, where she paid a lot of attention to detail but due to low difficulty and some minor errors adding up, she only scored an 11.066 (which made her cringe when she saw it!).

Stelutsa Savvidou of Cyprus opened her routine with a slightly cowboyed double tuck, hit a double L turn to full pirouette, and then landed her 1.5 to punch layout a little short, squatting a bit but standing up quickly out of it. She also performed a double wolf turn with good effort, though lost control a bit near the end, and then unfortunately sat her double pike before going in for the finish, scoring an 11.1. 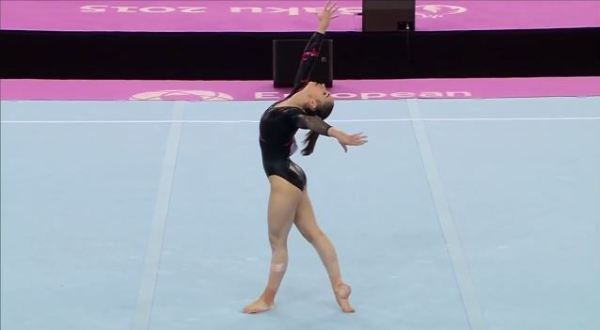 Alessia Leolini got things started on beam for Italy, performing a full pirouette, a bhs loso series with a step back, a front aerial to switch leap with a stumble, a back tuck followed by a back pike into her jump series, a switch ring, and a 2.5 landed slightly off-center with a hop over, earning a 12.166.

Up next was Giorgia Campana, who began with a bhs bhs loso with just a tiny check at the end. She hit her switch leap to split jump fairly well, and then also nailed her full-twisting back-handspring, side aerial, front aerial, and switch ring. Her ring leap was a little iffy in terms of form, and she had a bobble on her full spin, but hit her side somi and then her double pike dismount with just a step. Her pike position was GORGEOUS, I should add…face completely hugging her knees. She posted a 13.4 with a 5.8 start value for her effort.

Finally we saw Tea Ugrin, who showed great extension on her front aerial to split jump to wolf jump series. Her full turn was very controlled, her bhs loso was solid, her back leg up on her switch ring was nice, she hit her switch half, side aerial, and switch side well, and had a nice connection on her split leap to side somi before dismounting with a couple of steps back to earn a 13.533.

Campana went first on floor, landing her opening double tuck very well, nailing a double full, showing great work in both her artistry and in her dance elements, and finishing with a clean double pike and a smile on her face to earn a 13.1, which she seemed happy with.

Up next was Leolini, who had a tucked full-in with just a step to start. She bounced back on her double tuck, had a nice display of flexibility in her choreo, landed a double pike with a small hop, and finished with a dramatic pose on the floor for a 12.766.

Ugrin finished things off with her lively Swan Lake routine, opening with a solid triple full, showing almost no errors. Her double pike also had a good deal of control, her double L turn to full pirouette was well-timed, and though she unfortunately finished with a slightly out-of-control bounce on her double tuck, it was overall a great routine, earning a 13.566. 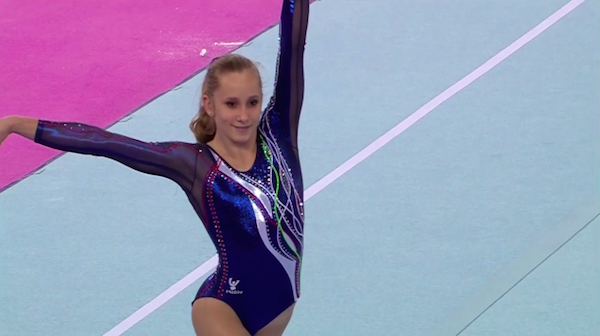 Ugrin in her opening pose.

For Poland, we saw Gabriela Janik up first, hitting a double pike with a lunge back to control her landing in her first pass, and then landing her punch front full with a step forward. The chunk of her routine in the middle had some great leaps and choreography, and she finished with cowboyed double tuck landing a bit short with her chest down and a hop forward for a 12.166.

Unfortunately, nothing else from the Polish girls was shown, including Janik’s 12.566 on beam and then Katarzyna Jurkowska’s 13.033 on beam and 13.366 on floor. Jurkowska with her 5.9 start value on beam had one of the best chances at making the final, especially after the gorgeous routine she showed at the Polish International meet last month, but with a 7.133 execution, it seems her mistakes were far too costly for her inclusion, though she still managed to qualify in 19th. The third member of the Polish team, Paula Plichta, did not compete on either of Monday’s apparatus.

Valentina Rashkova of Bulgaria performed a routine set to dramatic music, but it was a little devoid of intriguing choreo to match. In one instance, she merely walked into a corner, and in doing so, stepped out-of-bounds, perhaps focusing on the tumbling run to come? Her first was a double tuck, and she took two steps out there as well. Her leaps were a little short, she had a step on her front layout full, her second and final pass, earning an 11.266.

Barbora Mokosova of Slovakia had a 12.333 for her mostly steady set on beam, and then a 12.6 on floor, where she hit a 1.5 through to triple full incredibly well. She then went for a front layout full to stag, and finished with a double tuck hopped back.

Mokosova’s opening pose on floor. Her leotard reminded me of one of Brazil’s.

We didn’t see any of Tutya Yilmaz of Turkey’s routines, sadly, though her 13.7 for her relatively solid beam (where she has a huge 6.1 d-score, second only to Seda Tutkhalyan!) earned her a reserve spot, and she posted a 12.633 on floor after going out-of-bounds on one pass. Yilmaz also qualified into the all-around final in 12th place.