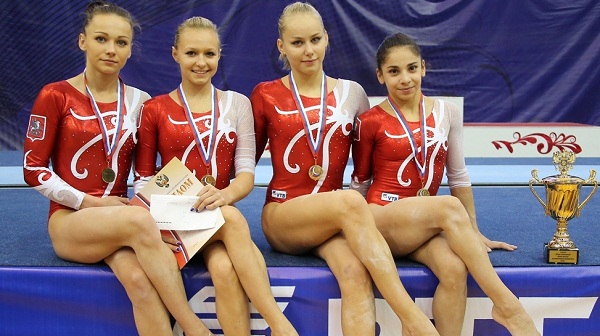 The Russian Cup kicked off yesterday with the team final-slash-individual qualifications in a showing that can best be described as the Russian version of day one at U.S. Championships.

The team from Moscow – featuring Maria Paseka, Alla Sosnitskaya, Daria Spiridonova, and Seda Tutkhlanyan – captured the title with a score of 173.1, dominating over the Central Federal District – featuring Ksenia Afanasyeva, Maria Kharenkova, Viktoria Komova, and Evgeniya Shelgunova – who came second with a 168.433. While pretty fairly balanced in terms of talent, the Central team put up only three athletes on several events, forcing them to count falls on bars and floor. St Petersburg, headlined by Tatiana Nabieva, placed third with a 159.867.

I was probably most impressed with Maria Paseka, who has come leaps and bounds over the past year. Both her Amanar and Cheng have gone from scary to dependable to good, which is what they are now. They’re not perfect, but they should serve her very well in event finals, as she now rivals Hong Un Jong for the greatest combination of difficulty in the world there.

As good as her vaults have gotten, her bars in the team final were phenomenal. Out of this world. Her best set ever. The opening combo – a toe full to Maloney to clear hip full to Tkatchev to pak salto to van Leeuwen – was ambitious yet performed excellently, and then to top it off, she stuck her double front cold, earning a 15.3. Truly fantastic, putting her right up there as one of the country’s top bar workers.

Paseka also competed on floor, and while her work there isn’t quite as impressive, it’s still not half bad. Her tumbling is a bit easy for high-level elite competition, though she hit it well and could just stand a little cleanup. Either way, this event is generally weak for Russia, so she could likely still contribute nicely here if needed in Glasgow.

Daria Spiridonova emerged as a very strong all-arounder in a messy competition with falls from the two biggest contenders, Seda Tutkhalyan and Maria Kharenkova. After a clean day, she qualified first into the final with a 57.3, her highest score since last year’s Russian Cup, when she finished with a 56.799 in the all-around.

Her bars wasn’t her best ever and actually looked a little labored, but she nailed her opening inbar to inbar full to Komova II to pak to van Leeuwen combination and didn’t have any major mistakes, so it was still a top-notch routine for the Russians and should again be podium-worthy at Worlds.

She also showed some improvement on beam, performing a steady set with the only problem being a slow connection between the Onodi and front aerial…though it could shape up to be a gorgeous combo with some work. I think she also wants to connect the full Y into a full pirouette, which would also be lovely, but it’s too slow right now to count beyond separate skills.

On floor, she suffers from Russian Triple Syndrome and the rest of her tumbling is relatively easy, but she mostly did a good job executing and could be reliable there in a tense situation. My biggest complaint is that her routine features a sassy cat meow – like Simone Biles has – only Spiridonova has nowhere near the performance personality to pull that off. It’s a very bland routine and rather than bringing her out of her shell, the ill-fitting music makes her lack of flashy personality all the more apparent.

Tutkhalyan looked solid with her DTY and Lopez on vault, and then hit a stellar – for her – bars set, posting a 14.333 after hitting her Maloney to pak, van Leeuwen, toe on to toe full to Tkatchev, and double front with no problems.

On beam, she got off to a good start with a roundoff layout, but then fell on her roundoff to layout full, didn’t connect the front aerial to sheep (she was actually one of three Russians to miss this same combo!), had a check on her switch to ring leap, put her hands down after her switch ring, and took a big step back on her double pike.

Then came floor, where she again got off to a good start on her double layout, but went a little wild on her 2.5 to front lay and then completely lost every sense of her body in the air on her 1.5 to Rudi to what was supposed to be a jump of some kind but she had zero control and just kind of flailed bizarrely in the air. She ended the routine stumbling back and sitting her double pike.

Kharenkova, the country’s other beam guru, also fell on her pet event after missing her bhs bhs layout. Like Tutkhalyan, she too missed her front aerial to sheep jump, and then also missed her switch to back tuck, though the rest wasn’t bad. She had a decent bars set – albeit with her usual heavy form issues – and hit a nice double arabian to start off a hit floor routine, but without a big beam score, she just wasn’t able to contend on that first day.

Unfortunately, I didn’t see Ksenia Afanasyeva’s new beam routine, but we were treated to her vaults – a serviceable DTY and a Lopez, both with steps – and her new floor, which has crazy music but I’m sure we’ll all get used to it. Her tumbling included a double layout, whip whip through to triple full, 2.5 to front layout, and a double pike, all done very well for a huge 14.967, a score bound to boost them on the event that typically causes worry.

Her 2012 teammate Viktoria Komova came in with a big bars set, but counted two falls and earned just a 13.233. She began with a Komova II to pak salto to van Leeuwen, which was where she first peeled off, hitting her knees to the mat. She had a great inbar half to a pretty laid-out Jaeger, which was almost fully stretched but not quite, caught her toe full to piked Tkatchev, and then came in late on the giant half before her upgraded dismount, the tucked double double. She just didn’t have enough gas, however, and didn’t quite get the second flip around in enough time to stand it up.

Beam was her only other event, and there were no falls, but it was a somewhat nervous routine and she could do better. She was the third gymnast to not connect her front aerial to sheep jump, her leg came up after her standing arabian, and there was a big check on her Y turn, but she finished well with a punch front, side somi, and double tuck with a step for a 14.167.

I didn’t see anything from Alla Sosnitskaya, though she actually had a very strong 56.367 all- around finish – and that was with a mishap on floor. Her bars scored a 14.7, the highest in her career, and she pulled in an equally strong 14.333 on beam. Evgeniya Shelgunova was also someone I missed, but she posted the highest beam score of the day with a 14.533, boosting her value a great deal as we look to World Championships.

Anastasia Grishina made her return on bars and beam, but earned scores of just 12.867 and 13.1, respectively. She was also left out of the official results, likely because she was not contributing to any team. It wasn’t the kind of performance she needed when she’s the one with the most to prove, but she was working with lower difficulty and a brace on her knee, so perhaps she’ll have more to give once we get into 2016.

Rounding out the senior field was Tatiana Nabieva, who competed a decent DTY, but had a fall on her already weak bars set, and dismounted with just a double tuck for a 12.233. Her teammate Lilia Akhaimova surprised with an excellent floor performance, however, bringing in a 14.4 for the second-highest score of the day there, though it’s unlikely she’ll be considered for Worlds.

The Rio-eligible juniors who competed in the meet included Angelina Melnikova, Daria Skrypnik, and Natalia Kapitonova. Their scores weren’t included with the team results, but we do know a few things thanks to the live stream.

Melnikova had a solid DTY for a 14.7, a very clean bars set for a 15.2, and then she hit her floor routine, though I don’t have the score for that. On floor, she shows a nice combination of strong tumbling and beautiful dance elements. Her piked full-in to open was very strong, and she also hit a whip whip to double tuck with ease. She also performed a lovely double L turn to Y turn, and of course, her triple wolf that spins straight up into a double pirouette. It’s a little out of control, but is so awesome, I forgive it.

She did have a fall on beam, but still managed a 13.667 there. Though we don’t have her floor score, I’d imagine it was more than enough to make her the unofficial all-around leader of the day even with that fall. Valentina Rodionenko is probably already looking into forging a 1999 birth certificate so she can smuggle her into Glasgow. They could absolutely use her.

I believe Skrypnik went four-for-four. I know for sure she hit her FTY, and then got a 14.667 on bars a 13.933 on floor, where she performed one of the nicest Russian triple fulls ever in addition to a 2.5 to front tuck, and a double pike…though her choreography was absolutely lacking. She basically just walks slowly for a bit, waves her arms around, and then falls to the floor. It’s…weird.

All I know of Kapitonova is that she earned a 13.067 on beam after falling there.

The Russian Cup continues today with the all-around final, and then event finals will be held over the weekend. Let’s hope that the women here are able to overcome the mistakes made on night one because this is one hell of a talented field. If only they can make themselves consistent enough to reflect this.