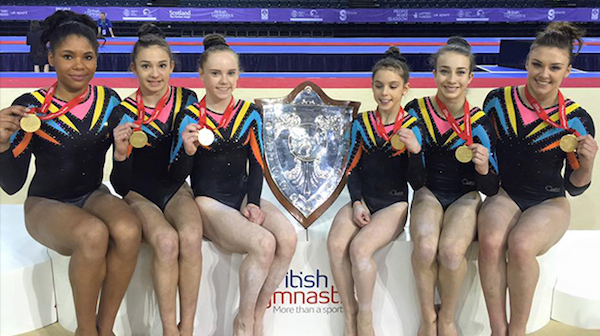 Amy Tinkler of South Durham yet again showed strong work and steady performances at this year’s British Team Championships in Glasgow, topping the all-around field with a 56.55 in addition to showing the best work on vault, beam, and floor.

After an incredible debut season as a first-year senior in 2015, capped off with an historic world team bronze medal, Tinkler continues to prove herself as one of Britain’s best. Her DTY was excellent with a 14.9, and she also hit her beam and floor routines incredibly well for scores of 14.1 and 14.25, both of which feature incredibly difficult elements that she performs flawlessly. She did have some struggles on bars, getting just a 13.3 there, but on a team with tons of talented bar workers, Tinkler brings clean form and impressive confidence on the three events the team needs covered most. In addition to her all-around win, she helped her gym to a bronze medal finish with a 203.0.

2012 Olympian Rebecca Tunney of City of Liverpool, the second-place team with a 206.45, came back on the scene following injury just prior to worlds last year, though she didn’t yet have a bars routine and was quite weak elsewhere. Now, however, she’s proving she might be on her way back to fighting form, competing the all-around for the first time since winning the British all-around title two years ago in 2014. Tunney’s beam and floor are still quite weak and she doesn’t yet have her DTY back, but her bars are looking lovely, earning a 14.4 to place first there. Her 54.15 was strong considering her lack of difficulty, and she certainly has time to show improvement before the Olympic decisions are made.

Junior Alice Kinsella of Park Wrekin was the bronze all-around medalist with a 52.7. She had a fall on bars to only get a 12.45 there, and she also wasn’t at her best on beam and floor, though her FTY looked lovely for a 14.0, one of the top scores of the day for this vault. Behind her in fourth was fellow junior and club teammate Ellesse Oates with a 52.05, also showing vault as her strongest, though not looking quite as tidy on her remaining events. The pair also led their gym to a fourth place finish with a 200.4, a good result in what was a strong group of teams.

In addition to these, we saw a few great performances from non all-arounders, especially Ruby Harrold of The Academy and Gabby Jupp of Sapphire, who tied for the silver medal on bars with scores of 14.15 each. Both have probably more impressive routines than Tunney overall, and I think Jupp is actually the cleanest of them all, but neither was completely on today despite their good performances. Both are more than “good,” however, and that’s something that didn’t show today.

Harrold competed on all events but floor while Jupp was on all but vault at British Teams. Harrold went with an FTY in lieu of her DTY, which we’ll hopefully see at championships, and struggled to hit beam, while Jupp had low-scoring performances on beam and floor.

We also got a glimpse of Tyesha Mattis, once the super-talented junior who spent the majority of her first senior year in 2015 dealing with injury, got off to a great start with a 14.0 on beam, an event the team will desperately need this summer, but then as she went to floor, she got injured and couldn’t complete her routine, again putting her Olympic dreams in jeopardy.

Other top performers at this meet included Ellee Cheetham with a 14.1 for vault silver, Samanta Katkevica of East London with a 14.05 for vault bronze, and Ondine Achampong of Sapphire with a 13.35 for beam bronze.

Full results from the British Team Championships are available here.