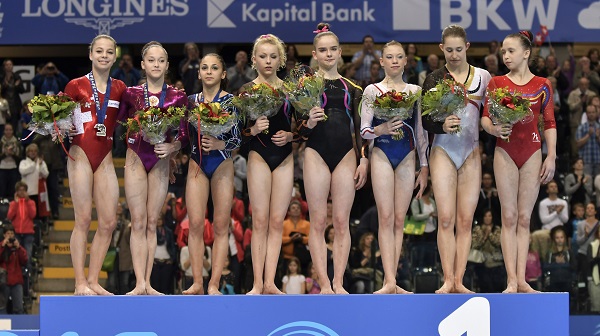 In senior competition, there are always standouts making so many podiums and rankings predictable if everyone hits. But in the junior all-around and event finals sessions at European Championships, with so many girls performing at a similar level, fans had surprise medalists at nearly every turn.

The all-around final was especially fun to watch, with most of my favorites for the title ending up making big mistakes, leading to three totally unpredictable medalists. That would pretty much never happen in the senior field! For Russia, I think most expected Anastasia Ilyankova and Ulyana Perebinosova to come in as the strongest, but both had mistakes in qualifications, leaving Perebinosova out completely after balking her vault but touching the table led to a score of zero there. Then, in finals, Ilyankova sat her vault and imploded on beam, scoring about four points less than she did in qualifications to hold the door wide open for almost anyone to sneak in for gold.

It was still a Russian who finished on top of the podium, however, as Elena Eremina overcame some mistakes of her own on each event to finish strong with a 54.55. Eremina is generally the least consistent of the three top junior Russians, but she managed to save her own implosions for event finals, sitting one of her vaults and falling on floor. Still, in addition to her all-around victory, she also managed a good performance for beam bronze.

With other falls from the British juniors Maisie Methuen and Alice Kinsella, Lorette Charpy of France, and the Romanians Carmen Ghiciuc and Ioana Crisan, the silver and gold medals ended up being a total surprise. Hometown girl Lynn Genhart of Switzerland placed second with a 54.365 while Martina Basile of Italy was third with a 54.266, both coming within a couple of tenths from the title.

Genhart winning silver at home was a great victory for the Swiss team, coming after great improvements from some disappointing mistakes in qualifications. Looking especially nice on bars and beam as well as on her super clean vault, Genhart had a fantastic day as a whole and did exactly what she needed to do in order to take advantage of others’ mistakes. The same can be said for Basile, who is a little weak on bars and fell there, though she hit everything exactly the way she needed to and everything worked out great for her.

Methuen was fourth with a 53.599, Kinsella was fifth with a 53.498, Morgane Osyssek of France was sixth with a 53.332, Rinke Santy of Belgium was seventh with a 52.599, Ghiciuc was eighth with a 52.507, Crisan was ninth with a 52.498, Ilyankova was tenth with a 52.433, Francesca Linari of Italy was 11th with a 52.373, and Charpy was 12th with a 52.299. Among these, Osyssek and Santy both had great days, correcting mistakes they made in qualifications to wind up finishing strong (and Santy had an especially strong finish, with one of Belgium’s best junior Euros results in years, tied with Berengere Fransolet’s own seventh place finish in 2012).

As one of the top contenders for the podium, Methuen unfortunately had a fall on bars that took her out of the running, though she got off to a great start with her handspring front pike half and also hit her beam and floor. And Kinsella, who killed it in qualifications, was also expected to do well but she was downed by her own fall on beam. Ghiciuc and Crisan can both blame bars for their own downfalls, beam was Ilyankova’s nemesis, Charpy had falls on both bars and beam, and Linari fell on bars as well.

Outside the top 12, several other contenders were taken down by beam as well. Anina Wildi of Switzerland could’ve been a longshot for the podium, but had a fall there and made mistakes that hurt her on bars and floor as well, putting her in 13th with a 52.032. Maellyse Brassart of Belgium fell on bars as well as beam to finish 14th with a 51.833, and then other beam falls came from Helene Schäfer of Germany (15th with a 51.733), Sanna Veerman of the Netherlands (16th with a 51.598), and Emma Höfele of Germany as well (17th with a 51.532).

Rounding out the field was Dorka Szujo of Hungary in 18th with a 51.331, Polina Borzykh of Georgia in 19th with a 51.258, Marie Skammelsen of Denmark in 20th with a 50.932 (who was actually near the top after the first two rotations on floor and vault, though unfortunately her bars and beam are currently too weak to make her a real contender), Vendula Merkova of the Czech Republic in 21st with a 50.899, Valeriia Iarmolenko of Ukraine in 22nd with a 50.499, Kristyna Brabcova of the Czech Republic in 23rd with a 50.366, and Amelia Sanchez of Spain in 24th with a 48.499.

The Italians dominated the vault final, with Martina Maggio getting the gold with a 14.499 average while Basile got her second medal of the meet, earning silver with a 14.233. Maggio showed beautiful work on her DTY, which she landed with just a hop, for a 14.866 followed by a 14.133 for a clean FTY. Basile went for a 1.5 and FTY combo, looking clean on both, and then Denisa Golgota of Romania tied Basile for silver, her DTY looking a bit more wild than usual with a step out-of-bounds for a 14.533, though she hit her FTY well for a 13.933.

It was a bummer to see Skammelsen less than two tenths shy for the podium, as that would’ve been a huge deal for Denmark, and she was one of the only juniors to actually perform two vaults from different families (using the senior rules rather than the modified rules for juniors). But she did a fantastic job either way, getting a 14.158 for her beautiful Yurchenko 1.5 and a 13.933 for her tsuk full, landed with a big hop back.

Osyssek did a great job with her FTY and 1.5 to get fifth with a 14.033, Eremina nearly stuck her 1.5 off to the side but sat her DTY for sixth with a 13.833, Livia Schmid hit her handspring front pike half and handspring front tuck half well for seventh with a 13.866, and then Olivia Cimpian of Romania hit her FTY but had a bad fall on her DTY to place eighth with a 13.266, and sadly getting injured in the process.

After her disappointing day in the all-around final, Ilyankova came back strong on bars to win the gold with a 14.766 while Perebinosova, back from her own disappointment in qualifications, got the silver with a 14.366. Ilyankova showed an especially nice shaposh to clear hip full to Tkachev and fought for a stuck dismount, and Perebinosova wasn’t quite as clean as her teammate, but with impressive difficulty and an awesome Chow to stalder half to Ezhova connection, she was definitely more than deserving of a medal.

In third with bronze was Charpy with one of her strongest performances of the meet, earning a 14.3 with an excellent execution score after hitting her toe full to Maloney to pak, piked Jaeger, and double layout with a hop. Kinsella was fourth with a 13.808, Genhart was fifth with a 13.433, Janna Mouffok of France was sixth with a 13.4, and Schäfer was seventh with a 13.333, all hitting their respective routines. The only big mistake came from Switzerland’s Leonie Meier, who over-arched the stalder full into her layout Gienger and then fell on that skill.

The beam final saw a little more heartbreak, but still overall was impressive, with most hitting their routines. Ilyankova got a second gold medal for this routine, more than making up for her all-around mistakes with a near-perfect set, getting a 14.4 with a huge 8.7 e-score with especially nice work on her roundoff layout and side aerial to back handspring.

Kinsella got the silver medal, also looking super clean aside from a check on her double spin. With great work on her side aerial to layout stepout and on her nearly stuck 2.5 dismount, Kinsella earned a well-deserved 14.166. Coming in for the bronze was Eremina, who had a few wobbles but showed great work on her bhs-bhs-loso series and hit her 2.5 dismount for a 13.841.

Also hitting in this final was Charpy with a 13.833 for fourth and Methuen with a 13.733 for fifth. Schäfer actually would’ve medaled had she not fallen on her switch half, hitting the rest of her skills incredibly well, but instead she ended up sixth with a 12.966. Borzykh also had potential for a medal here, but wobbles on most of her skills and a huge stumble forward and off the mat on her 1.5 dismount took her out of the running. Finally, Crisan had a hard fall on her opening sequence that ended her routine just as quickly as it began, as she was forced to leave the podium with a shoulder injury that left her unable to complete her routine.

Golgota picked up her second medal of the final on floor, winning gold with a 13.933 for her fantastic routine. While nothing she does is super difficult, it was one of the stronger routines of the final, and was mostly clean, opening with a great piked full-in followed by a tucked full-in, and then finished well with a great double pike and double tuck. Kinsella also got a second medal with floor silver, earning a 13.866 with the most difficult set in the bunch, including a 1.5 to 2.5, a solid triple, a double pike, and a double tuck.

The bronze went to Perebinosova with a 13.8. She was pretty clean throughout, hitting her tucked full-in and whip whip to double back incredibly well. She had helicopter legs on her 1.5 to double full and stepped out-of-bounds on her double pike, and would’ve gotten the title without that mistake, but overall she did great work.

I thought Alisson Lapp of France actually had the best routine, however. It was the only ‘total package’ routine in the mix, with great tumbling, clean execution, excellent choreography, and an unbelievable performance quality. As a whole, she’s held back by the fact that her routine is pretty easy in comparison to the others in the mix, and she also stepped out-of-bounds on her 2.5 to front tuck, but I think this was truly a fantastic routine and hope she’s able to build on the difficulty in the next few years so she can contend for medals in the future.

Lapp and Linari tied in fourth on this event, each with scores of 13.666. Megan Parker of Great Britain also had a super strong and clean routine to place sixth with a 13.5, as did Naomi Visser of the Netherlands, who was seventh with a 13.2, though both were held back a little by their low difficulty overall. Eremina was hoping to luck out with what could’ve been her fourth medal of the meet after winning team and all-around gold as well as beam bronze, but she unfortunately had a fall and finished with a 12.8.

Overall, I really enjoyed the junior competition and seeing so many with huge potential for the next quad. I’m especially excited to see what the new Swiss gymnasts can do, and think there is so much potential for lesser-known countries like Denmark and the Czech Republic to break through as well.

Full results from all sessions at Euros are available here.

13 thoughts on “Surprises on Every Podium at Junior Euros”